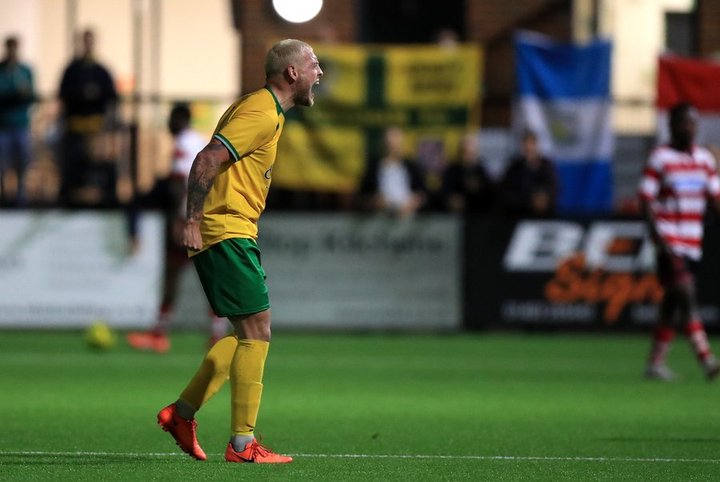 We had a big night of FA Cup action last night, and a number of notable results. Here’s our round up of the action.

Ashford United hosted Bracknell Town at Homelands, and from our two promotion favourites it was the visitors who took the tie- and in some style, winning by four goals to one. Seb Bowerman and Max Herbert gave the Robins a half time advantage, and although an own goal on the hour reduced the arrears and gave the home fans hope, Bowerman soon extinguished it from the spot before Herbert grabbed the fourth right at the death.

Barking came back from two goals down against Marlow on Saturday to take a point, and last night built on that performance by walloping Dunstable Town of the Spartan South Midlands League. Junior Dadson got a hat trick, Dumebi GB Dumaka, Donnell Anderson and an own goal made it six, and the visitors did manage one back six minutes after the break.

Bedfont Sports were the first of our giant killers, but unfortunately they killed one of our giants! Kevin Diomande and Shamal Edwards gave the hosts a two goal advantage against Lewes, and although Aaron Cosgrave got one back for the Rooks Charlie Postance sealed the victory in the last minute with Sports’ third.

Bowers & Pitsea and Hornchurch had winning starts to their league campaign, but the Urchins were a step ahead in the cup, Ellis Brown (2) and Charlie Stimson earning them a three-nil win at the Len Salmon.

South Central Northwood travelled to Burnham, of the Hellenic League Premier Division, and fell to defeat by the single goal of the game, whilst Bury Town were our next giant killers, defeating Brightlingsea Regent by two goals to one at Ram Meadow. Cemal Ramadan opened the scoring for the hosts, and although Khris Oti equalised just before the break it was Town who got the winner, Will Gardner finding the back of the Regent net.

Cambridge City hosted Stowmarket Town, and the match went to penalties after a one-one draw, Jarid Robson scoring for City. The hosts marched on with victory in the shootout, four-two.

Chalfont St Peter and Farnborough were our featured match- and we got five goals and much drama. Read all about it HERE.

Chertsey Town host Leatherhead, and the Tanners were the next giant slain, albeit on penalties after a goalless draw. Five-four was the spot kick tally.

Chichester City hosted Cribbs, of the Western League Premier Division. City fell behind in the first half, but mounted a comeback after the break, Ben Pashley, Josh Clack and Ethan Pritchard earning a three-one victory.

Chipstead hosted Deal Town, who you might recall demolished Sittingbourne four-one in the last round and also put four past Knaphill in the round before. There was no demolition last night, a late equaliser by Callum McAllister taking the tie to penalties after a one-one draw, and the Chips triumphing four-two in the shootout.

Coggeshall Town hosted Stansted, who knocked out Basildon United in the last round, and it was a second North Division scalp for the visitors who won one-nil.

Sevenoaks Town stayed in Kent and travelled to Corinthian, who fell to unlucky defeat in the FA Vase Semi-Final earlier this month but had been superb elsewhere, winning every other league and cup match so far. They maintained that record, winning three-one despite Oaks getting the opener through James Bessey-Saldanha.

Dereham Town and Canvey Island met in Norfolk, and the hosts might have done better had keeper Elliot Pride not been dismissed after twenty seven minutes. Soon afterwards they were two down, Conor Hubble and Elliott Ronto with the goals, and the Gulls eased to victory.

A resurgent East Grinstead Town were perhaps the biggest giant slayers of the night, as they defeated Premier Division favourites Worthing. The Mackerel Men were two up at the break, Jesse Starkey and Mo Diallo seeing them seemingly comfortable, and although Louie Theophanous got one back seven minutes after the break when Dayshonne Golding got the visitors third sixteen minutes from time that should have been that. Only it wasn’t, as Theophanous and then Daniel Thompson made it three-three, and the Wasps won the penalty shootout four-three.

Marlow, who probably feel that they dropped two points at Barking last Saturday, travelled to Frimley Green, who defeated Westfield in the last round. The visitors had to get a late equaliser from Devontae Romeo to take the tie to penalties, but were the masters of the shootout, winning four-one.

Haringey Borough invited Tunbridge Wells to White Hart Lane, and the visitors might wish they’d declined that invitation as Borough hit them for five. Anthony McDonald, Laste Dombaxe, Daniel Akindayini, Georgios Aresti and Abdul-Rasheed Ajani-Salau found the net, and Wells were left with just a first half consolation.

Harlow Town and Waltham Abbey managed only one goal between them, and it came to the Abbotts Prince William Domafriyie in the first half, whilst Maldon and Tiptree looked to continue another famous FA Cup run as they travelled to Haverhill Rovers and won three-nil, Aaron William-Bishell, William Cracknell and Scott Kemp finding the net.

Haywards Heath Town had a poor start to their season as they lost to East Grinstead Town at the weekend, and couldn’t get started last night either, as Hanwell Town won yet another match one-nil, with a goal from Gianni Crichlow.

Horsham and Kingstonian faced off in an all-Premier clash in Sussex, and the home side came out on top despite a red card and a late K’s fightback. An Eddie D’Sane double left the Hornets comfortable at half time, but they were less comfortable when Harvey Sparks got his marching orders ten minutes after the break, and left to hang on when Gus Sow got one back for the visitors three minutes from time. You can see Simon Roe's images from that match here- and one of them above.

Corinthian-Casuals headed along the worst section of the A27 to play Little Common of the SCFL, and three second half goals from Benjamin Checklit, Nat Pinney and an own goal gave them a comfortable win.

Cheshunt were also on the road, and also scored three, in defeating Long Melford. An Adam Cunnington double and one from Zack Newton did the damage.

Aveley have got used to slaying giants of late, and did it again at Pitching In Southern Premier Central side Lowestoft Town. Bradley Sach opened the scoring early- he’s scored in each of the Millers three matches so far- and George Sykes got two, also taking him to three for the season, in a three-two victory.

Margate hosted our 2018-19 South Central Division champions Hayes & Yeading United, and fell to a two-one defeat- a late John Ufuah penalty not enough to salvage a point, whilst Merstham let a two goal lead slip to draw against AFC Dunstable, and then fell seven0six in the penalty shootout. Joedon Gugas-Cowin and Sol Petterson Bohner scored for the Moatsiders.

A two-two draw followed by penalty shootout defeat was the outcome for Enfield Town at Peterborough Sports, too. Jeremiah Gyebi and Shaun Okojie scored the goals for the Towners.

Ben Ward Cochrane got the only goal of the game for Potters Bar Town, who defeated East Thurrock United.

South Park hosted Bognor Regis Town at Whitehall Lane, and really put the wind up the visitors, Leon Lalor-Dell and Nasim Dukali giving them a two-nil lead at half time. The Rocks got back into the match through Jordy Mongoy on the hour, and Keaton Wood levelled matters ten minutes from time, before the Sussex side triumphed four-two on penalties.

Staines Town fell two-one at home to Walton Casuals, Sebastian Osei-Obengo with their goal, and AFC Sudbury fell to a four-nil defeat at Stamford.

Bishop’s Stortford played their get out of jail free card on Saturday, coming back from what looked certain defeat to take a point against Bognor Regis Town- but needed another at Welwyn Garden City, a second half equaliser from Darren Foxley earning them a penalty shootout, which they won four-three.

Whyteleafe had scored eight goals- four on each occasion- and conceded only one in their two previous matches, but managed only two last night as they entertained Binfield. It was enough, as the Ryan Gondoh double- which gives him six for the season and four consecutive goalscoring games- were the only goals of the game.

Saints not quite divine, as Boro come from behind to triumph  Chalfont's cup endeavours come up just short, but what a match we had at Mill Meadow