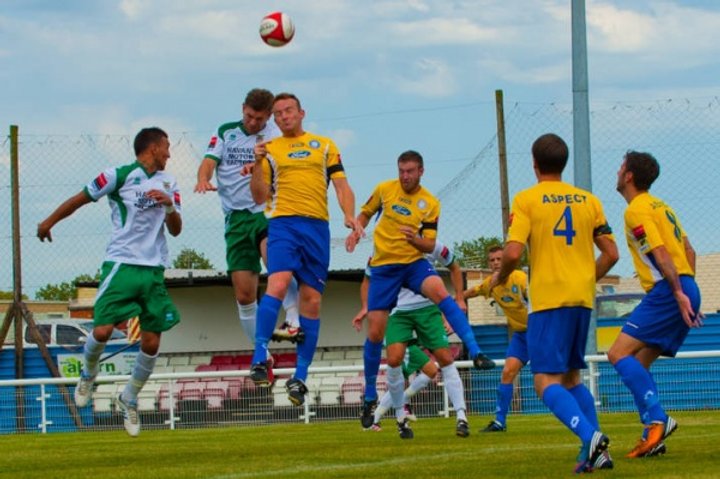 HE SAYS it will be his last season, and Wealdstone striker Richard Jolly looks in the mood to go out in style.

Last season’s Golden Boot winner struck after 26 minutes of his side’s home opener against Met Police, intercepting a scuffed goal-kick by Police keeper Jamie Butler and firing home what proved to be the only goal of the game to get Stones’ title challenge off to a successful start.

Lowestoft, beaten play-off finalists for the last two seasons, came from a goal down at half-time to chalk up an impressive 3-1 win at Whitehawk. The Brighton side, making their Premier debut, took an early lead with a penalty from summer signing Scott McGleish, veteran of 692 Football League games. McGleish went close to doubling the lead with a header but the Trawlerboys showed their class with three goals in eight minutes midway through the second half. Chris Henderson twice fired home from outside the box with Dale Cockrill netting in between them.

Fancied Margate were comfortable 2-0 home winners over Hendon. Two new signings, Sam Long and Alex Rhodes, hit the bar in the early stages and it was the 65th minute before Richard Avery gave the hosts a deserved lead. Carl Rook added the second with 12 minutes left. Last season it was November 15th before Hendon conceded their second away goal!

Two promoted sides started Premier life with away victories and in the case of Enfield Town it was their first-ever game at this level. Lewes, another team expected to do well, took the lead with a 12th-minute header by Karl Beckford. Mark Kirby replied for Town five minutes before the interval and last season’s Ryman North Golden Boot winner, Liam Hope, lobbed the winner nine minutes after the break.

Bognor enjoyed their return to the top division, deservedly winning 3-1 at Concord who paid the penalty for missing first-half chances. They should have been ahead before Ashley Robinson struck for the visitors on the half-hour. Tony Stokes immediately replied with a 20-yard free-kick but Mu Maan restored Bognor’s lead in the 39th minute and James Crane netted from close range to seal it on the hour.

The other promoted side, Leiston, were held to a 1-1 home draw by Cray. There were three second-minute goals in the league on opening day: impossible to tell which was first, but Cray’s Mark Willy must be a strong candidate for his effort, timed at 86 seconds. Leiston took a while to get into the game but they had the upper hand after Luke Hammond equalised with a 32nd-minute free-kick.

The scoreline was the same at East Thurrock, where Kingstonian were aggrieved not to leave with all three points. Wade Small was fouled by keeper Jamie Riley in the 90th minute and, although he found the net anyway, the whistle had already gone. Riley was sent off and the free-kick came to nothing. The game finished with 19 men: the hosts’ Steve Sheehan and visitor Andre McCollin were dismissed for a clash shortly after Kye Ruel equalised for Rocks on 61 minutes. Dean Lodge had given K’s a 32nd-minute lead and both sides had goals disallowed.

There was a third 1-1 draw at Bury and there, too, the visitors will feel they should have won. Carshalton striker Paul Vines had a penalty saved by Marcus Garnham with 16 minutes left. Vines and Jack Clark hit the bar for the Robins, who took command after falling behind to a John Sands strike on 47 minutes. Vines headed home Clark’s cross to level it four minutes later and it was all Robins after that.

Harrow were off to a flying start at home to relegated Thurrock, who had already cleared the ball of their line twice before Rob Wooleaston’s ninth-minute opener. Alwayne Jones and Simeon Akinola made it 3-0 by the 16th minute, and Thurrock did well to keep the final score down to 4-1. Gary Jones stretched the lead with a 51st-minute penalty and Joel Barnett replied with ten minutes left.

The other relegated side, Hampton, fared better, bearing visitors Hastings with a lone 43rd-minute header by Max Hustwick. Zac Attwood was inches away from a late leveller.

Bradley Woods-Garness pounced on a loose ball to score for Canvey three minutes into the second half at Wingate and that was enough to earn all three points.

 Four-goal K's on top for now KINGSTONIAN (pictured by Andy Nunn celebrating one of their goals) moved to the top of the Ryman Premier table, at least for 24 hours, with a 4-2 home win over Harrow tonight (Monday).

Swans spoil homecoming in nine-goal thriller  A MASSIVE crowd of 1,569 turned out for Maidstone’s first Ryman South game at the Gallagher Stadium, their first league game in their home town for 24 years, and they were certainly royally entertained even the result was not what the majority of them wou