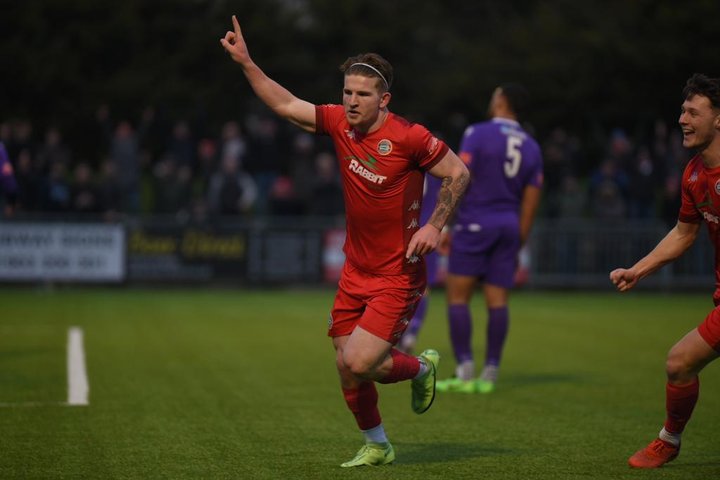 We had an incredible nine goal thriller at Cray, five for the Towners, four for the Blues- and Worthing’s lead is cut. Here’s our Pitching In Isthmian Premier round up.

Our leaders, Worthing, welcomed FA Trophy holders Hornchurch, who were in fine form, with seven straight victories. Could they trip up the Mackerel Men?

The match was hard fought, but when Jasper Pattenden (pictured- Marcus Hoare) opened the scoring for the hosts twelve minutes after the break- in front of a crowd of one thousand three hundred- it seemed momentum was with Worthing. But right at the end up popped Tom Wraight with an equaliser for the Urchins. Worthing see their lead cut to four points.

Second place Enfield Town travelled around the M25 to Tolworth to face fifth place Kingstonian. The Towners were impressive in defeating Bowers & Pitsea in midweek, and went ahead on eighteen minutes, Jake Cass with his second Towners goal to add to the fifteen he got at Bishop’s Stortford. They weren’t ahead for long, however. The K’s have been impressive in recent weeks, and drew level only four minutes later through Fabio Saraiva- but that just provoked Mo Faal, the Town striker replying with goals on twenty six and thirty one minutes- his twenty ninth and THIRTIETH goals of the season. Shortly after the restart Cass made his own personal tally eighteen when putting the visitors four-one up, and Lyle Della-Verde made it five with twenty five minutes to go.

The K’s got a goal back twelve minutes from time, Daniel Ajakaiye’s seventeenth of the season, and then Saraiva made the scoreline more respectable by pulling it back to three-five, but there was no catching the visitors- who had Andre Coker sent off. The Towners are now four points off the top, whilst the K’s slip out of the top five.

Lewes, in third, welcomed Brightlingsea Regent. The visitors had a morale-boosting win in midweek, ending a run of four consecutive defeats, whilst the Rooks had won five of their last six and with Joe Taylor and Ollie Tanner knocking them in for fun- and Taylor was having more fun after three minutes as he gave his side the lead. The fun didn’t stop when the striker got his and his side’s second nine minutes later, but Regent weren’t downhearted and got one back on the half hour, Dom Locke with the goal. Regent’s resilience was rewarded with an equaliser nine minutes from time, Aaron Blair converting from the spot, and even though Connor Barnby saw red they held out for a point. The Rooks remain third, whilst the visitors are eighteenth.

One thousand, one hundred and nine watched the match.

Bishop’s Stortford, starting the day in fourth, welcomed East Thurrock United. The Blues, who strengthened in midweek, had lost only one of their last ten, and went ahead in this one eight minutes before the break, Mark Haines heading home a corner for his second of the season. Before half time it was two-nil, Chris Harris doubling their advantage, and five minutes after the restart Jonathan Giles made it three. Ollie Miles pulled one back for United, but just before the hour Anthony Church made it four for the hosts, and they stay fourth.

Five hundred and forty four turned up to watch.

Folkestone Invicta, newly reinforced with the signing of midfield maestro Andy Drury, welcomed Wingate and Finchley. After a goalless first half the first action of note saw Dexter Peter see red for the visitors on sixty six minutes, and the ten men couldn’t hold out, David Smith putting his side ahead with twenty minutes remaining. That turned out to be the only goal of the game, and it saw Invicta back into the top five.

Cheshunt, on a high following their FA Trophy heroics last weekend, saw that man again- Rowan Liburd- give them an early lead as they welcomed Horsham. That was the Amber number nine’s thirteenth goal in just eleven matches, but it didn’t send them into the interval ahead, as Tom Kavanagh equalised from the spot on forty one minutes. The Hornets took all three points four minutes from time, Charlie Harris with the winner.

Carshalton Athletic had finally started to look like the play off contenders we all expected them to be, having won their last three and with only two defeats in their last ten. They hit the road today to Cray Wanderers and were quickly ahead, Dan Bassett getting his ninth of the campaign after just four minutes. Bassett had another midway through the first half, but Wands hit back, Cameron Brodie scoring eleven minutes before the break. Bassett wasn’t sharing the limelight, and got his and his side’s third six minutes before the break, but again Wands narrowed the deficit when Chris Dickson made it two-three just before the break- and then they equalised, Brodie grabbing the leveller and delighting the home crowd, whilst undoubtedly leaving the travelling fans feeling rather stunned.

Four minutes after the restart it was advantage Robins once more, Kwaku Frimpong with goal number four (and seven), but again the Wands hit back, Luca Albon with another equaliser twenty two minutes from time- and then, amazingly, the hosts went ahead, Jamie Yila making it five-four! Finally, that was that- a nine goal thriller going, somehow, the way of the hosts!

Tenth played eleventh as Margate hosted Corinthian-Casuals. Casuals, with three wins and a draw from their previous four, had been in fine form of late, but they fell behind on twenty six minutes, Sam Blackman opening the scoring for Gate. Two minutes after the restart Alfie Bendle silenced the home crowd and drew his side level, but Ken Feyi put the hosts ahead once more with fourteen minutes left, and a red card for Ola Williams made the visitors job far more difficult as they strove for an equaliser. Ben Greenhalgh made sure of three blue points with their third goal just before the end.

Bognor Regis Town’s chances of being play off candidates needed a boost. The Rocks, with only two wins from ten, hosted managerless Potters Bar Town, the Scholars on the receiving end of four straight defeats and hoping not to make it five. It took an hour for a goal to arrive, and when it came it came to the hosts, and to Jordy Mongoy- and the Rocks doubled their advantage ten minutes from time, loanee Dan Gifford with his second Bognor goal. The Rocks are twelfth, and twelve is the same number of points they are away from the top five.

Haringey Borough had begun to climb the table, unbeaten in four and unlucky to only take a point in each of their last two. Bottom side Leatherhead travelled to Coles Park this afternoon and found early on that their luck hadn’t yet changed, Mekhi Leacock-McLeod putting Borough ahead on eight minutes, but the Tanners got level and silenced the Bell End seven minutes before the break, Joshua Bohui equalising from the spot- and then silenced all but their own fans when taking the lead just before the interval, Archie Burnett making it two-one.

Another spot kick, this one to the hosts, drew them level- David Olufemi converting- but Borough then did themselves no favours when Alfred Bawling saw red. Just how much damage that did was demonstrated a minute from time, when Jermaine McGlashan earned a critical three points for the Tanners.

Finally, two sides who were really in need of points met at the Len Salmon. Bowers & Pitsea had lost their last six matches whilst visitors Merstham hadn’t fared much better, but the Moatsiders were handed a man advantage when Alex Bentley saw red for the hosts. They quickly took that advantage, Serge Makofo putting them ahead, and held it until the end. Huseyin Biler for the visitors and Ben Sartain for the hosts also saw red before the end.

 More Bracknell plaudits, more Bowerman goals- whilst the Geordies wallop Uxbridge and Woods shock Marlow We also had wins for Chertsey Town, Westfield and South Park. It’s our Pitching In Isthmian South Central round up.

Can the Urchins trip up the Mackerel Men- and do themselves and the rest of our promotion hopefuls a favour?  We've a big afternoon in prospect in the Pitching In Isthmian Premier. Here's what's occurring.