Gulls and Stow win handsomely, but the Millers hold onto top spot 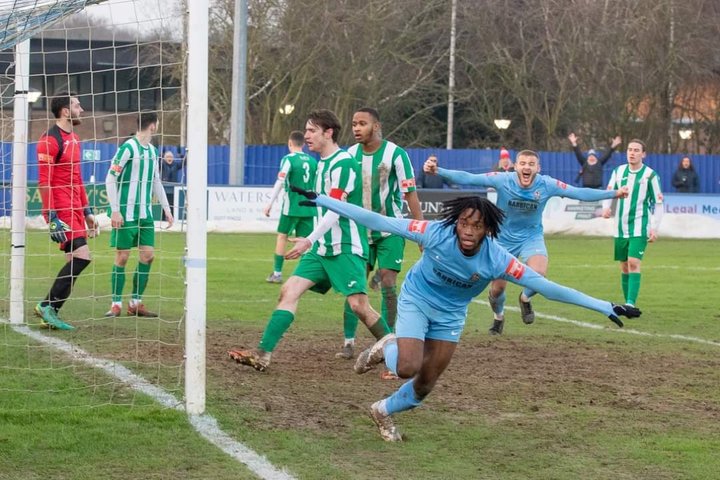 Our top three all win, Dereham get back to winning ways, Brentwood go top five, Witham shock Bury and the Seasiders good run continues. It’s our Pitching In Isthmian North Round up.

Top of the pile Aveley were on the road at Heybridge Swifts, and for much of the afternoon it looked as if their place as leaders would be taken by either Canvey Island or Stowmarket Town. George Sykes, however, had other ideas, and continued his fine form by scoring his eighth goal in nine matches. That was that, and the Millers stay top on goal difference.

Stowmarket Town travelled to Tilbury as they looked to regain their place at the top of the table, and George Bugg gave them the lead on twenty one minutes. The Dockers weren’t going to lie down, and Sam Jeremiah drew them level ten minutes after the break, but you don’t get to challenge at the top without being able to deal with adversity, and two goals in two minutes put the visitors clear, Josh Mayhew’s spot kick quickly followed by a third from Willie Clemons. Another spot kick, and Mahyew made it four six minutes from time.

Canvey Island have gone from invincible to inconsistent in recent weeks, but they got off to a flyer at Hullbridge Sports, Evans Kouassi giving them the lead in the second minute. The lead lasted only four minutes, however, Tony Stokes levelling, but Kouassi restored the lead with his twentieth of the campaign on the half hour. Into the second half we went, and first Elliott Ronto and then Matt Price- the latter with his twenty first of the season- made it four-one, only for Joe Gregory to give the hosts hope with eighteen minutes remaining.

It was a forlorn hope. Callum Fitzer made it five, and right at the end Price got number six from the spot. The Gulls remain third, a point behind the top two with one (Stowmarket) and two (Aveley) games in hand.

Dereham Town had lost four of their last five. They travelled to Basildon United looking to start another winning streak, and Rossi Jarvis struck first, putting them ahead on twenty one minutes. The clincher came nine minutes from time, Adam Hipperson’s thirteenth of the campaign anything but unlucky, and the Bees misery was compounded by a red card for Paul Shave. The Magpies are fourth.

Brentwood Town kicked off an hour earlier than everyone else, and as our other matches were heading to the half time whistle Daniel Ogunleye was scoring in the last minute against Great Wakering Rovers to earn his side three points. It was pretty tough on the visitors, but it send Town into the top five and continues their fine form- form which has seen them take twenty five points from their last thirty.

After a goalless first half Grays Athletic fell behind just after the break, Ibrahim Kehinde opening the scoring for Coggeshall Town, but they were behind for only two minutes before Geofrey Okonkwo drew them level. That was that, and Athletic end the day in sixth, the Seed Growers thirteenth.

Romford, without a win since October 16th, shocked AFC Sudbury fans when L’heureux Menga put them ahead seven minutes before the break. The Yellows hit back in the fifty fifth minute, Ross Wall with the equaliser, but then saw themselves down to ten men as Sakarija Hassan bypassed yellow to see red. It didn’t give Boro a boost, but it did given them a first point since October 23rd.

Bury Town were soon ahead against Witham Town, Mr Reliable Ollie Hughes with the opener, but the equaliser came just after the break, Ramiah Mills with his fourth goal in four games. Mills then shocked the home faithful, who made up the vast majority of the five hundred and sixty eight watching on, by putting his side ahead with only fourteen minutes left. Could they hold on? They could- and open up a nine point gap on the bottom two.

Felixstowe & Walton United and Hashtag United have both been in fine form of late so we anticipated a close battle at the Goldstar Ground. The Seasiders broke the deadlock just before the hour, Josh Hitter with the goal, and it turned out to be the only goal, as United stay twelfth.

Last night Barking came from behind to defeat Maldon & Tiptree three-one. Shad Ngandu tucked away what looked a soft penalty for the Jammers, but goals from new signings George Purcell and Freddie Parker, and a third from Barney Williams, saw the Blues take all three points.

 Can anyone stop the Robins? Another win, and still fourteen points the gap for Bracknell- and we already seem to have a six team playoff battle! Elsewhere, a big win for the Saints- and Northwood make it four consecutive away wins

Mackerel Men march on, but Stortford take top billing with five  There were also wins for Lewes, Kingstonian, Hornchurch, Carshalton and Casuals. It’s our Pitching In Isthmian Premier Round up.