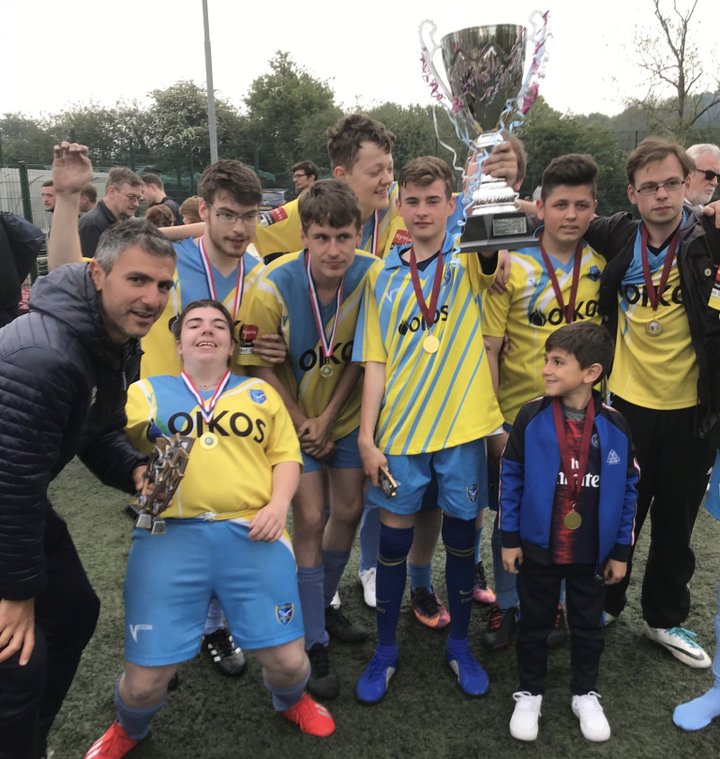 CANVEY Island’s successful Soccability squad can pick up where they left off when they take to the field again thanks to a valuable funding boost.

The Gulls are among the first recipients of a grant from the Trident Community Foundation, which was launched in December as part of Pitching In’s landmark grassroots sport investment programme.

The club began providing training sessions for young disabled footballers around three years ago and now have a regular squad of 14.

The TCF grant is set to pay for new kit, equipment and coaching and chairman John Batch hopes to see the team go from strength to strength.

“We are very proud of our Soccability team and the fund will help us keep it going through these tough times,” he said.

“They are a fantastic asset to our club and to see the change in the kids is so rewarding. Sometimes we have more than 20 kids, boys and girls, at training and they have really missed it recently. We’ve bought them footballs which tie around the waist to give them a feel of the football at home - our Trident Community Foundation grant will cover that, a new kit and more.”

Canvey Island are one of five Pitching In Isthmian League clubs to benefit from the first allocation of TCF grants, which will be used to fund new or existing community-focused schemes.

“We never stopped backing it and we wouldn’t have folded it under any circumstances, but with no income coming in it was becoming harder to finance,” Batch said.

“I couldn’t be more thankful for this. We value our place in the community very highly and we are grateful for this funding, which will be of real benefit to our youngsters.”

The TCF grants come as a timely morale boost for the 27 clubs who have been offered them across the three Trident Leagues in the wake of a second consecutive campaign being curtailed – with more to come from the earmarked £150,000 fund donated by Ladbrokes’ owner, Entain, this season.

“This is the time to be giving good news – it is the honey to go with the bitter pill,” said Pitching In Isthmian League chairman Nick Robinson, who sits on the TCF board alongside his counterparts from the Southern and Northern Premier leagues, two Ladbrokes representatives and Non-League Paper editor-in-chief David Emery.

“We want to be able to breathe life into this – it’s not just football, it’s football with a real community effort.

“The principles behind the various projects are brilliant and it’s vital to engage youngsters, in particular, to get the names of the clubs and leagues into their psyche.”

Pitching In ambassador Stuart Pearce added: “These clubs will have a vital role to play in the health and wellbeing of society when restrictions ease.

“Initiatives like this will show the true meaning of Pitching In and strengthen existing bonds within communities across the country.”

Ladbrokes, with the support of its owner Entain, has launched a multi-million pound investment programme, Pitching In, designed to support and promote grassroots sports. The programme includes a flagship partnership with The Isthmian, Northern Premier and Southern Leagues - collectively known as The Trident League, as well as a partnership with the UK sports charity SportsAid. For more details head here.

Geordies turn to fundraising  And for every pound they make, the Mayor of London will give them another!