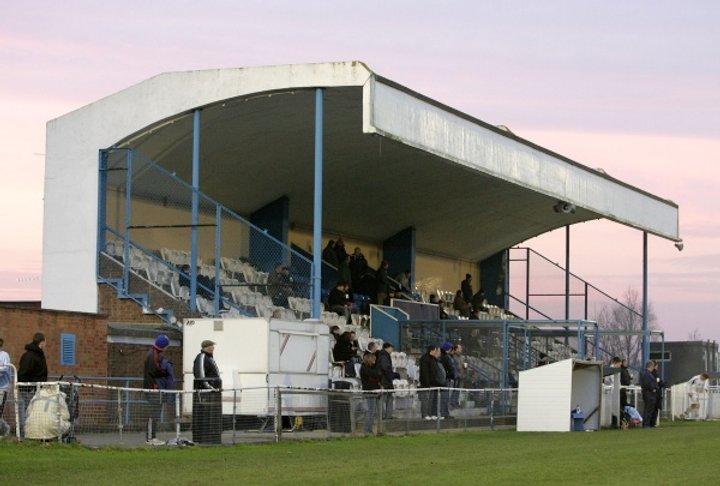 Prior to the match, West Ham’s joint owner David Sullivan will officially open the ground which has been redeveloped over the past seven months. With the land being owned by West Ham, the club have agreed a deal to play at the ground for the next two seasons, with West Ham's reserve side also playing their matches at the site.
The majority of the work around the pitch has been undertaken by Blues supporters who have been extremely generous in the amount of hours they have put in, getting the ground fit for use after several years of being left unoccupied.
Inside, the changing room areas, boardroom and bars have all been given a new lease of life, and will be the envy of many visiting teams during the upcoming season.
Ford United - now Redbridge - used the ground for Ryman League football in the past. Current Ryman League club Romford were the most recent tenants, as an Essex Senior League club during the 2007-08 season (as pictured, courtesy of Gavin Ellis/TGS Photo).
The Grays line-up will include recent signings Ryan Kirby, Leon Lalite and Jack West, while goalkeeper Lamar Johnson, Luke Marshall and Ryan Maxwell will continue to try and impress the management team.
The bulk of the squad who ended the season with Blues are expected to feature including Craig Pope, Junior Baker and Joao Carlos, all of whom were voted into the Ryman North Team of the Year.

 Schaaf shines for busy Rooks WITH the pre-season programme getting into full swing, Ryman Premier club Lewes enjoyed two outings in less than 24 hours and could be pleased with the outcome.