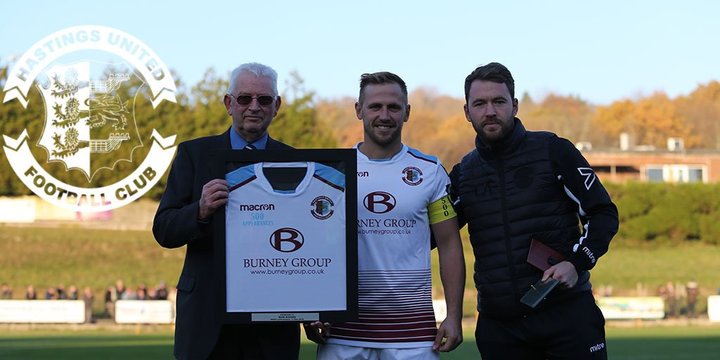 Skipper Sam signs on once more

Hastings United last night announced that captain Sam Adams had agreed to stay for the 2021-22 season, as the club hope to finally grab the promotion that looked a certainty until two seasons were ended by the pandemic.

Sam played for the United youth team and also spent time with Rye and Iden United FC before signing for the club properly in 2005. He was part of the squad that sealed promotion in 2007, and- spells at Rye United and Hythe Town apart- has been a mainstay of the first eleven at Pilot Field ever since. He made his five hundred and sixty ninth appearance for the club as last season came to an untimely end, and will become the club's record appearance holder when the new campaign kicks off.

The club have also honoured him with a testimonial, and we'll bring you more on that match once we have it.

“I’m delighted to stay on for another season as we have unfinished business and I want to be a part of this team for as long as I can. Aggy and his staff have done a great job getting this squad together and I can’t wait to get back on the pitch at home, The Pilot Field. Let’s hope we can finish the upcoming season and achieve what we set out two years ago. I love this club and am proud to represent my hometown.”

He is pictured after his five hundredth appearance, in November of 2018.

Istagram!  We have an Instagram page. Have you followed it?