Hayes get six, we have two nine goal Kentish derbies, and Sudbury shock the Rocks! 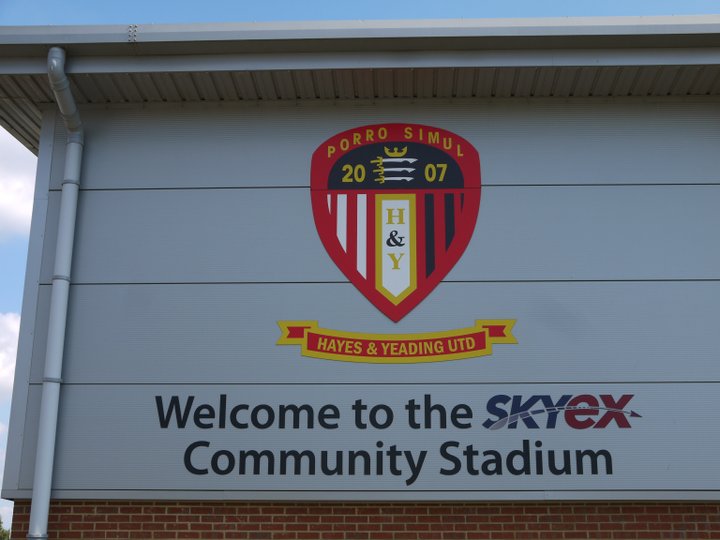 We had a big programme of FA Cup and League fixtures last night. Here- minute by minute- is how the evening unfolded.

Who would face Haringey Borough in the next round of the FA Cup? Who would host Torquay United? Could Basildon extend their lead in the North Division? Could Hastings United close the gap on Cray in the South East? Could Waltham Abbey tie on points with high-scoring Bracknell Town? All of these questions and many more were being asked as we kicked off an extensive programme of fixtures in every division but the Premier. Here’s a minute by minute guide to the action.

1930: The first match of the evening got underway, as East Grinstead Town hosted Guernsey. Three points separated the sides, and a win could have taken the Wasps above the Green Lions.

1945: The other fixtures got underway.

1950: That lead didn’t last long, as Faversham hit back through Dean Grant.

1955: AFC Sudbury of the North Division shock their Premier Division opponents by taking the lead in the FA Cup as Billy Holland scores against Bognor. And Jeff Duah-Kessie puts Phoenix Sports ahead against Greenwich Borough. There’s a goal at Ramsgate too, and it goes to Jake Embery of Herne Bay.

1957: Could Heybridge Swifts be about to end Basildon United’s 100% record? They take the lead through Joe Gardner. Elsewhere in the North Division Billy Johnson has put Great Wakering Rovers ahead at Canvey.

2003: News from the Pilot Field, and it’s good news for the home side, as Hastings United take the lead against Horsham- Sam Adams with the goal. Elsewhere, we hear that Tilbury have gone ahead at Barking through Lewis Jaggs.

2006: Bury Town take the lead at Witham Town, and we can hear James Beardwell’s anguish from a distance of 100 miles. Kyran Clements finds the net. Ware have also taken the lead, at home to Hertford Town in the South Central Division- Albert Adu with the goal.

2007: Haywards Heath Town make the breakthrough in the battle of the two sides promoted from the SCFL, Karl Akehurst putting them ahead against Three Bridges. Meanwhile, in the South Central Division, Dan Clements has put Tooting & Mitcham United ahead against Bedfont Sports.

2011: The Seasiders have equalised, Jack Ainsley drawing them level from the spot against Soham.

2013: Haywards Heath Town double their lead, and it’s that man Akehurst with his second.

2015: Hanwell Town go ahead at Waltham Abbey. Twitter gives it to Calum Duffy, other sources to Harvey Killeen. We’ll leave them to argue about that later.

2016: Hythe extend their lead to 3-1, Nigel Neita with the goal; whilst Whitstable Town break the deadlock against Sevenoaks Town, through Stephen Smith.

2017: Allan Tait puts Chipstead ahead at South Park, whilst Ramsgate go 2-1 up against Herne Bay, Rory Smith with it.

2022: Duah-Kessie gets his second, and Sports third, as they lead Greenwich Borough 3-1. Ramsgate have another, Rory Smith with his second.

2024: Kouassi has another for Mildenhall, who now lead 2-0, whilst an own goal gives Hayes and Yeading United the lead at home to Northwood.

2025: Basildon are back on terms, Eljay Worrell with their equaliser at home to Swifts.

2030: As the half time scores begin to come through, Billy Hunt (Billy Hunt, Billy, Billy, Billy- Paul Weller- come on, sing along) strikes for Brightlingsea Regent in the FA Cup. Ashford Town also find the net late, Max Webb giving them the lead at Molesey. Max Webb, incidentally, also describes the handiwork of the large and irritating spider in my hallway.

Half times are all in, and at the moment AFC Sudbury and Brightlingsea Regent are in the driving seat in the cup, whilst in the North Division Basildon United are three points clear of Aveley. Bracknell Town will be content even without a match, as Waltham Abbey are only slightly eating into their lead at the top of the South Central, whilst remaining in that division only Marlow v Uxbridge finds the deadlock unbroken. The majority of the goals are in the South East Division, where Hythe Town, Phoenix Sports and Ramsgate each lead 3-1. Only the early kick off, between East Grinstead Town and Guernsey- where they are into the second half- remains goalless.

But wait! A three minute double from George Landais has just given East Grinstead Town a 2-0 lead!

2055: Hanwell Town go ahead at Waltham Abbey once more, Tom Collins with the goal.

2057: Game on at Hythe, as Faversham narrow the gap through Harry Goodger. 3-2 now the score. Two hundred there to watch it- and they’re being thoroughly entertained. Hastings have doubled their advantage, Daniel Ajakaiye getting their second against Horsham.

2058: Northwood, a goal down at Hayes & Yeading United, now have a mountain to climb as Samuel Tring is sent off.

2100: Jimmy Muitt equalises for Bognor at Sudbury, and Jake Embery makes the match between Ramsgate and Herne Bay interesting, bringing it back to 3-2 and giving his side hope.

2104: Sean McCormack scores what could be a crucial goal for Egham Town was they equalise in the cup at Brightlingsea Regent. Elsewhere, Ambrose Gnahore equalises for Gary Alexander’s Ashford United at home to Sittingbourne, whilst the ten men of Northwood are made to suffer by Hayes, Hassan Jalloh making it 2-0.

2105: Bognor have turned the game around at Sudbury, Harvey Whyte giving the Rocks the lead, whilst Zak Ansah gives Hythe more breathing space at home to Faversham, making it 4-2.

2106: Reece Deakin pulls a goal back for Greenwich Borough at Phoenix Sports, whilst Waltham Abbey seem to have completed the turnaround at home to Hanwell Town, Ronnie Winn putting them 3-2 up after they’d twice been behind.

2107: Breathing space for Ramsgate too, as Tom Chapman makes it 4-2 against Herne Bay, whilst Bedfont Sports have equalised at Tooting- Abdeen Temitope Abdul with the leveller.

2111: A flurry of activity, as Culley scores again to put Hayes 4-0 up, and Chris Saunders makes life more difficult for Whitstable Town, getting a red card. Jake Turner has put Brightlingsea Regent 2-1 up in the cup, whilst Ramsgate just can’t quite shake off Herne Bay, Ben Gorham closing the gap once more to 4-3.

2112: Another red card, this time Jason Beck for Hertford Town. You may remember his dad, Jeff- but Hi-Ho, there's no Silver Lining for Town.

2113: Sam Ashford pulls a goal back for Witham Town at home to Bury Town, 1-2 the score, whilst Westfield go ahead once more at home to Chalfont St Peter, Daryl Cooper-Smith making it 2-1.

2116: Jordan Berry equalises for Chalfont St Peter, who were behind for little more than two minutes.

2117: A breakthrough at Brentwood, and the Seed Growers have it. Aaron Condon finds the net for Coggeshall Town.

2118: Mitchell Chapman makes it three for East Grinstead Town, who have only two minutes left against Guernsey.

2120: The attendance at Pilot Field is announced as 479. Hastings United still lead Horsham 2-0. There are 246 at Ashford United, and East Grinstead have defeated Guernsey 3-0.

2123: Chris Kinnear surely makes the game safe for Hythe Town, as he makes it 5-3 against Faversham. Elsewhere, Bedfont Sports shock Tooting by going 2-1 up, Jack Mills the scorer.

2125: The only match without a goal now has one, as Chid Onokwai gives Marlow the lead against Uxbridge.

2127: It’s 5-0 at Hayes and Yeading, an own goal for luckless Northwood, whilst you’ll never guess what’s happened at Hythe! Yes, Harry Goodger has scored again, and the Cannons now lead 5-4.

2128: Jake Embery has equalised for Herne Bay at Ramsgate, and it’s now 4-4. In the North Division Soham Town Rangers seem to have ripped up the form book at Felixstowe, and now lead 3-1, Sam Mulready the scorer.

2129: The 100%ers look to still have a perfect record, as Eljay Worrel puts Basildon United ahead against Heybridge Swifts.

2133: It seems their wait for a first victory is over. Mildenhall go 3-0 up at home to Dereham Town, Thomas Debenham with it.

2134: AFC Sudbury equalise against Bognor Regis Town, with a goal from Joe Whight.

2136: Hayes and Yeading are showing poor Northwood no mercy. It’s now 6-0, Josh Chamberlain with the latest goal at the Skyex.

2137: Can you believe it?! Jake Embery now has his FOURTH goal of the match and Herne Bay have come from 3-1 and 4-2 down to lead 5-4 at Ramsgate! Isn’t football a wonderful thing (Ramsgate fans are currently shouting no, with added expletives). The eight matches in the South East Division have (so far) yielded thirty three goals.

2140: Right at the end, Sevenoaks Town have equalised against the ten men of Whitstable Town, William Johnson-Cole surely earning them a point. AFC Sudbury and Bognor Regis Town heads to extra-time.

2145: Full time across the South East Division, and Herne Bay have to be the headliners, somehow winning 5-4 in a thrilling match at Ramsgate. Jake Embery will get the plaudits, and deserve them, with four goals to his name. Victory for Hastings United sees them close the gap on Cray Wanderers at the top to three points, with Hythe’s win seeing them two points further back.

2146: Not quite so many goals in the South Central Division, twenty four in total, with six of them coming to Hayes and Yeading United who are now fourth. Waltham Abbey come from behind twice to defeat Hanwell Town and move level on points with Bracknell Town, whilst Marlow are third, a late goal earning victory over Uxbridge.

2148: We’ve finished in the North Division, and Basildon United still have a 100% record, after coming from behind to beat Heybridge Swifts. The other sides at the top end of the table in action tonight, Felixstowe and Walton Utd and Canvey Island, both lost at home. Witham Town slip to the bottom of the table after Soham Town Rangers record their first victory, whilst Mildenhall Town jump to 12th with their first win.

2148: It’s Brightlingsea Regent who will play Torquay United in the FA Cup after they edged past Egham Town, 2-1.

2216: And it’s over! AFC Sudbury slay a giant and go on to face Haringey Borough in the next round of the FA Cup!