Heath down the league-leaders, whilst Barking also take a Premier scalp 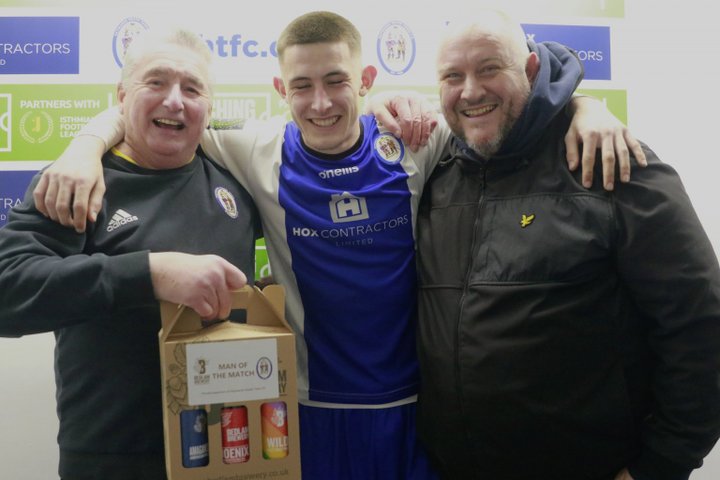 Horsham hit five, and we’ve also wins for Bowers, Cheshunt, Borough, Invicta and Margate as we round up a busy night in the Velocity Trophy

Haywards Heath Town were our Tuesday night heroes as they came from behind to defeat League leaders Worthing at Hanbury Park in the Fourth Round of the Velocity Trophy. Heath took a very early lead, indeed the opener came in the first minute, when a good ball from Nathan Cooper found Alahady Jalloh at the end of the box. There was still much work to do, but the Heath number seven did it expertly, finishing into the bottom corner.

The Mackerel Men hit back. Davide Rodari scored his first goal for the club on ten minutes, lobbing Heath keeper Billy Collings from distance, and six minutes before the break Darren Budd put the visitors ahead, a free kick going through a crowded box into the net- but that was as good as it got for Worthing. Straight after the break Trevor McCreadie got the hosts level with a left-footed shot, and on sixty-five minutes the same player but his side ahead, finding the top corner from close range. Try as they might, the visitors, spurred on by a large away following, couldn’t find their way back into the match, and it’s Heath who march into the last eight.

Ben Holden was man of the match, and was so overcome with emotion he couldn't even look at his newly acquired beer! Image courtesy of the club.

Our other giant killers were Barking. The Blues welcomed East Thurrock United, and were five minutes away from winning the match in normal time, but in the end had to triumph in a penalty shootout. The Barking opener also came from the spot, Manuchim Oke-Williams scoring a minute before the break, but the visiting Rocks drew level five minutes before the end, an own goal doing the damage. So off we went to the lottery, and Barking were perfect from twelve yards and triumphed by five goals to three.

Horsham welcomed Pitching In Isthmian Premier rivals Corinthian-Casuals and put them to the sword. It took only two minutes for Lee Harding to put the Hornets ahead- his eighth of the season- and as well as opening the scoring, Harding closed it too, with number five (nine) ten minutes from time. In between those two goals, Eddie Dsane, Jack Brivio and Will Miles made it a miserable night for the visitors.

Margate needed a late winner to dispose of Tooting & Mitcham United. James Bessey-Saldanha opened the scoring for the Blues midway through the first half, but the Terrors drew level just after the hour, Zaid Ouaret Sorr with the equaliser. Just when we were starting to think about a shootout, Lewis Knight put the hosts through with only four minutes remaining.

Folkestone Invicta welcomed Pitching In Isthmian South East promotion-chasers Cray Valley PM for a Kentish derby, and the two were separated by only one goal, Alfie Paxman scoring it seven minutes after the break. That’s eight for the campaign for Alfie.

Another one-goal match came on the Essex coast, as Brightlingsea Regent departed the competition against Haringey Borough. That goal came from the spot, David Olufemi converting sixteen minutes from time.

A little bit behind the rest and still playing in the Third Round, Cheshunt and Bowers & Pitsea marched on to the next stage with victory. The Ambers welcomed Pitching In Isthmian North playoff hopefuls Brentwood Town, and were two up by the break, Taylor McKenzie and Kane Diedrick-Roberts- the latter on his debut- giving them a distinct advantage. Town got one back seven minutes after the restart, Ashley Nzala getting them back into the match, but the next goal went the way of the hosts, Adam Crowther restoring the two goal cushion with twenty one minutes remaining. The Blues then got another, almost immediately, Daniel Ogunleye pulling it back to three-two, but the home crowd were soon shouting hurrah for Joe Re, as he ended a period which saw three goals in three minutes by making it four-two to the Ambers.

At the Len Salmon Bowers and Pitsea had a comfortable win against Great Wakering Rovers. An own goal put the hosts ahead after just twelve minutes, and Ade Adedoja doubled their advantage six minutes before the break. The same player made it three-nil with twenty three minutes left, and although Louie Hay got one back for Rovers nine minutes from time that was no more than a consolation.

 Scholars do themselves a power of good- and dent K’s promotion hopes Elsewhere, the Dockers get back to winning ways, Chipstead dent Sports promotion hopes, whilst the Moles and Green Lions play out a draw. It’s our Pitching In Isthmian League round up.