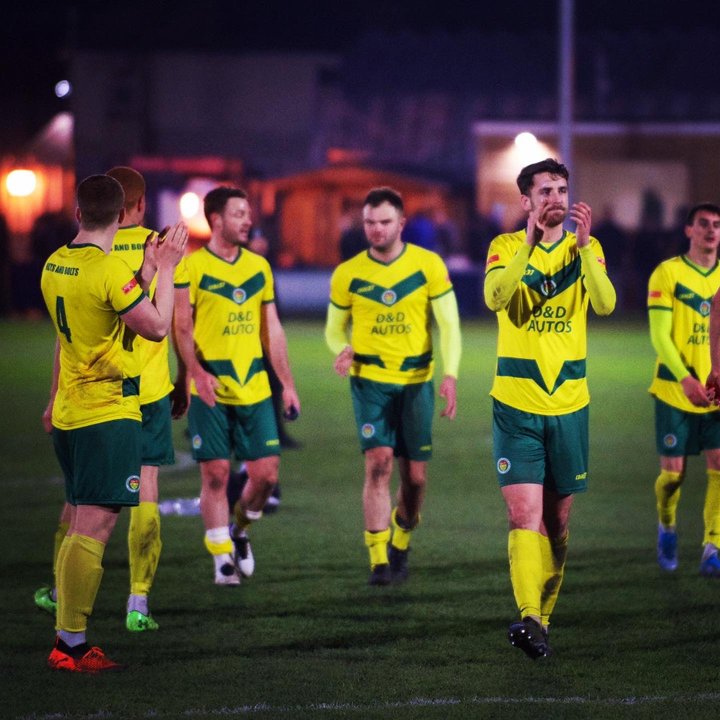 We also had wins for the Rams, Vickers, the Brickies, Oaks and Bridges. It’s our Pitching In Isthmian South East round up.

Hastings United had opened up a seven point gap at the top of the Division as those below dropped points, and they hosted a Sussex derby as Burgess Hill Town made the journey to the seaside. With only two defeats from their last ten the Hillians weren’t expected to be pushovers, and so it looked as they forged ahead after just three minutes, Tom Chalaye silencing the bumper home crowd.

United drew level on twenty minutes, Ollie Black poking home after a goalmouth scramble, but the visitors weren’t intimidated and just before the break Chalaye scored again, heading home a free kick and sending the home crowd off for their burgers in high dudgeon.

Hill then did the unthinkable and struck again seven minutes after the break, Martyn Box making it three-one, before Black again reduced the arrears once more. Could United get an equaliser and delight most of the fifteen hundred (and two) fans present? They couldn’t, and credit to the visitors for ending the hosts nine match unbeaten run.

Ashford United dropped points from winning positions during the last two weekends, but went ahead at Herne Bay after just ten minutes, Jay May with the goal. May made it two three minutes after the restart to the disappointment of most of the six hundred and twenty eight present, and they were further disappointed when Gary Lockyer made it three-nil from the spot with twenty minutes left. The Nuts and Bolts close to within four points of the leaders, with a game in hand, and are pictured, courtesy of the club.

Faversham Town welcomed promotion-chasing Ramsgate and were quickly ahead, Harry Harding making no mistake from the spot after four minutes- but they weren’t ahead for long, Callum Peck drawing the Rams level seven minutes later. The Lilywhites lead was restored when Harding didn’t need a spot kick to make it two, but again Peck drew them level, twelve minutes before the break. The second half had only one goal, and it went to the Rams, Tijan Jadama getting the winner with eleven minutes remaining as the visitors go third.

The last time Cray Valley PM and East Grinstead Town met there were eight goals, and it seems that was their entire quota for the two matches this season, as yesterday they didn’t manage a goal between them. The Millers end the day in fourth, seven points off the top, whilst the Wasps are sixteenth but will be delighted at taking four points from six against their promotion-chasing opponents.

Haywards Heath Town and Lancing also couldn’t manage a goal between them. That’s another fine point on the road for the Lancers, and leaves Heath in fifth.

VCD Athletic’s Youssef Bamba has been in fine form of late, and got his fourteenth of the season- his sixth in seven matches- to put them ahead against Whitstable Town. Number fifteen for the player came seven minutes after the break, and an own goal five minutes from time made it three-nil and three points. Vickers ended the day in seventh, five points off the top five.

Sittingbourne went from nil-nil to two-nil in the space of three minutes just before the break, Harry Stannard and Taylor Fisher breaching the Hythe Town rearguard. The Cannons halved the arrears right at the end, Alex Brown with the consolation- but they didn’t have time to force an equaliser. The Brickies are eighth.

Corinthian are having a fine first Isthmian season, and they took the lead at Three Bridges when Jack Bath scored just after the half hour- but they couldn’t hold onto it, Curtis Gayler equalising three minutes later. The second half saw Bridges take the game by the scruff of the neck, and Dan Perry put them ahead on fifty three minutes, before an own goal increased their advantage just after the hour. Bath then got one back with eight minutes to go to worry the home fans, but their side held on for victory and are up to twelfth, four points and one place behind their visitors.

Sevenoaks Town and Phoenix Sports saw Luke Leppard break the deadlock in favour of the home side on twenty minutes, and then double their advantage eight minutes after the break. A Sports comeback didn’t materialise, and Oaks climbed to fifteenth.

We had a Sussex derby at the Enclosed Ground, Whitehawk welcoming Chichester City, and the Hawks went ahead on thirteen minutes, Ollie Munt opening the scoring. The equaliser came nine minutes from time through Lloyd Rowlatt, and both sides had to be content with a point. The Hawks are fourteenth, City sit tenth.

Goals, red cards and drama galore!  We had an incredible nine goal thriller at Cray, five for the Towners, four for the Blues- and Worthing’s lead is cut. Here’s our Pitching In Isthmian Premier round up.