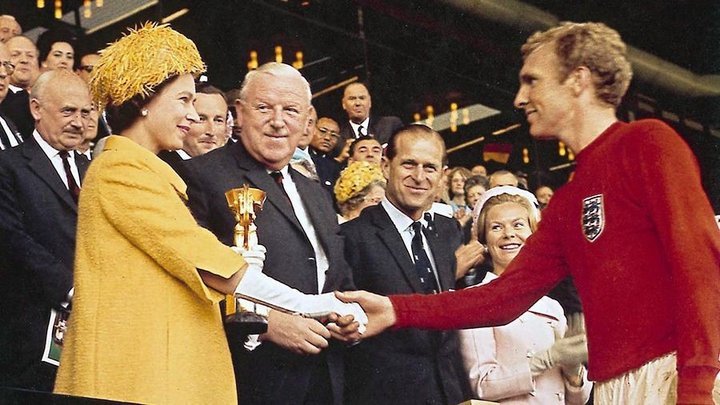 The Pitching In Isthmian League would like to send its deepest condolences to Her Majesty the Queen and the Royal Family on the passing of HRH The Prince Philip, Duke of Edinburgh.

Prince Philip had a keen interest in sport, including our national game, and spent three years as President of the Football Association. He was also President of the National Playing Fields Association, these days known as Fields In Trust, and during his tenure he dedicated a great deal of time to raising money to give children in urban areas green space in which to exercise. Across his 64-year tenure the number of green spaces protected with Fields in Trust grew from 430, covering around 1,300 hectares, to over 2,000, covering nearly 12,000 hectares.

He presented many trophies to many footballers over the years, but we thought we'd lead with a photograph taken from the 1966 World Cup Final, where he supports Her Majesty as she presents the World Cup to Bobby Moore.

His long contribution to our public life will forever be remembered, with gratitude and affection.

Introducing...Magpies TV!  Dereham Town have a fabulous YouTube channel, and we thought we'd introduce you to its latest offerings