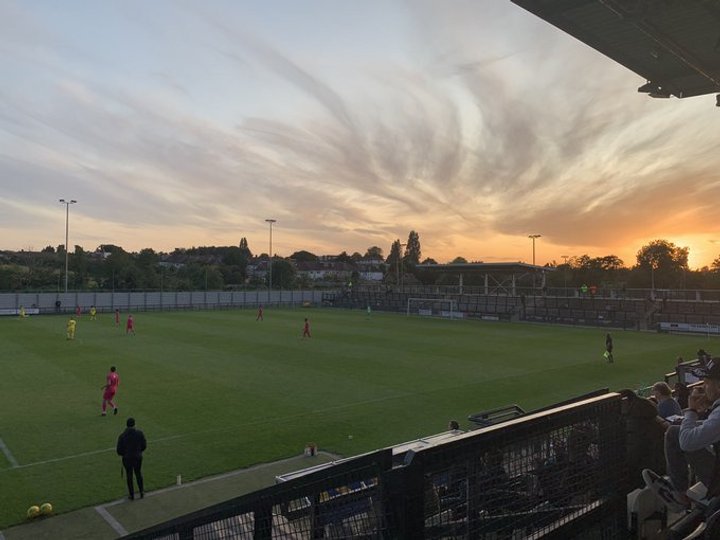 We’re off to South London, which is apparently black and white. Adam Best and friends answer the questions.

We’re off to South London, which is apparently black and white according to the folk who run the Tooting and Mitcham United fan site- spookily called South London is Black and White. Adam Best and friends answer the questions before heading off to do a Zoom quiz.

I can’t wait. Lockdown was a tough time. It surprised me, how much I missed the game. Even as professional football came back, the regular televised games were mere crumbs of comfort. I missed my mates. At Tooting, we are a small but fiercely loyal bunch, as all supporters are at our level, and know each other personally. As such, I think the absence of the routine of following the team was keenly felt by many. One of our number organised a few virtual events in the early to middle stages of full lockdown, when Zoom quizzes still hadn’t lost their sheen. It was a way of reaching out to everyone and checking in. South London is Black and White printed some booklets of our articles, sold them to supporters (proceeds to the club) and delivered some by hand, which was just an excuse to go and say hello to folk we hadn’t seen since Hanwell, our final match of the abortive season. But this was all just filler. Speaking mainly for myself, but probably for everyone, getting the game back up and running and, crucially, getting supporters back in the ground will be absolutely vital for the game, the clubs, the people.

I think it’s reasonable to assume that certain things will be very different about going the match, and it’s going to take some patience, but my overriding feeling is one of unmitigated joy at the prospect of standing in the rain, 1.5 metres from each of the rest of the Bog End, as Tooting inevitably concede one after 3 minutes. Football is absolutely brilliant and I have missed it. As I write this, it has been announced that supporters will be allowed back in from Step 3 down. This is good news.

Personally, yeah it probably will. I’ll still go to away games when I can, and I’ll still have my beers in the clubhouse, but my feeling is that I won’t linger like I used to. We’re lucky at Tooting as the facilities are large enough to ensure we all have a bit of space indoors, as well as a couple of benches outside. So I’ll maybe do that if it’s not raining. I do believe that it’s possible to be safe and responsible and still enjoy the full match day experience. It’ll take some adapting, but it’s better than the alternative. Which is Zoom quizzes.

a) Charlie Rowe bringing a tray of drinks all the way from the bar to the far terrace while we were losing to Hanwell at home, November.

b) Winning a bottle of Galliano in the raffle, away at Sittingbourne in the FA Trophy.

c) The exact moment the ball hit the back of the net off Dan Williams’ left foot to make it 4-2 to Tooting, away to Hanwell, last game of the season. Hanwell were throwing everything at us to try to equalise and we were straining under the pressure, and this after a prolonged spell without a win. When that late goal went in, there was a collective release of euphoria, from both the support and the players. I was so knackered with all the unbridled joy that I couldn’t even celebrate Kladji Cani making it 5 shortly after.

Away to Barking. For a multitude of reasons - it seemed like there were closures on nearly all logical tube and overground train routes that day and our fourth loss in a row in a disjointed spell after an excellent start to the game. We were victim to what a number of people, including our players, believed was a phantom goal that had not crossed the line. A tough loss to take after the previous 3 fixtures, and the evidence that the team where about to bounce back with a result. Which they duly did in the next 2 fixtures before the world stopped.

We should be challenging for the title as a minimum. We have the players to do so. The key thing will be holding on to a lot of them as the season progresses as the "Tooting Production Line" continues to afford these young men chances to shine at higher levels. The key will be transitioning when this happens and a strong "next man up" mentality. I hope to see more young players transition into our senior side, and to see more of our senior side sign pro contracts higher up the pyramid.

Although I look forward to another away at Barking - really - if only to replace the nightmares of that game with a more pleasant experience, I'm most looking forward to the first game we play. It’s been long. It's been frustrating. I just want to meet my mates, see all the faces, support a team that represents south London and watch Tooting and Mitcham play football. In the flesh.

Favourite away ground across non-league has to be Lewes, it's a beautiful place to watch football. In our division, Staines.

We’re lucky to have a healthy number of rivals, Kingstonian, Sutton and Carshalton to name a few... sadly none of those find themselves within our division this year, but Dulwich Hamlet will always be our biggest enemy!

Make sure you wait until you get to the ground before you eat, so you’ve got room for the best food across the whole of non-league in The Shack!

My favourite Tooting player is slightly obscure, but Jordan Cheadle and his magic left foot holds a special place for me! The big centre back who was so prolific from freekicks, you know it was destined to rocket into the top corner.

Read more from South London is Black and White by heading here.

 Yellows on the Telly! AFC Sudbury will be live on the BBC in the FA Cup

Isthmian Supporters Predictions 2020-21: Bishop's Stortford  We’re back in the Premier Division, and we’re off to Bishop’s Stortford, where Steven Vale still hankers after the performances of the Essex Dalai Lama.