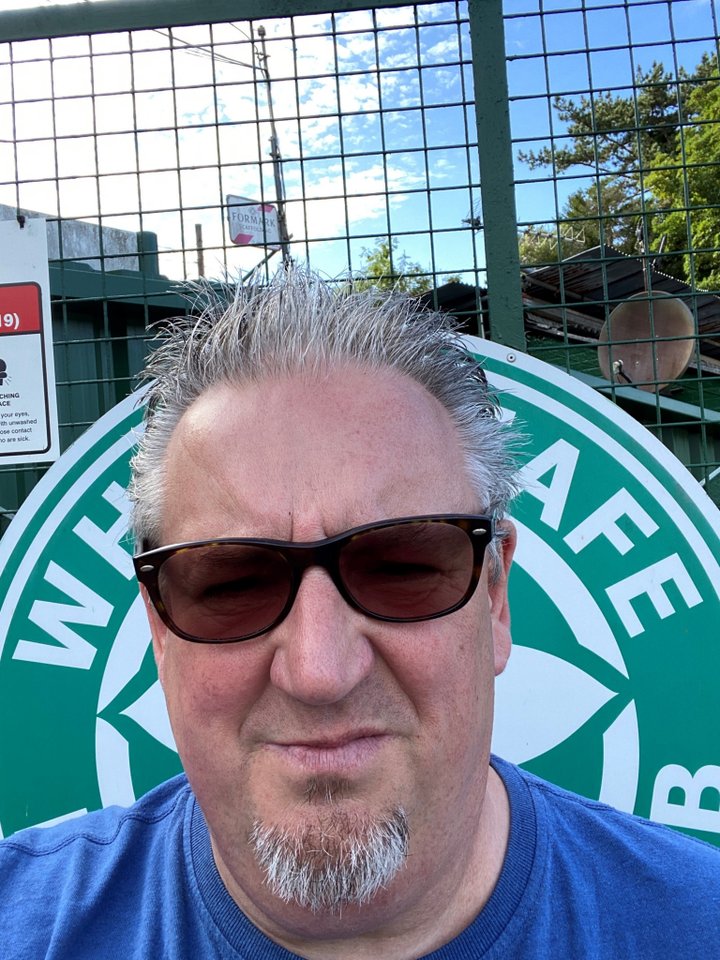 Steve Hole takes us on a trip down Church Road, happily loses a one hundred pound bet, and isn't much looking forward to playing Cray Valley again.

We’re heading South East once more, and taking a trip down Church Road to Whyteleafe, where Steve Hole tells us what dangerous creature lurks beyond the goal at the far end (see image below). Actually, he doesn’t, but if he knows we’d like to be advised! 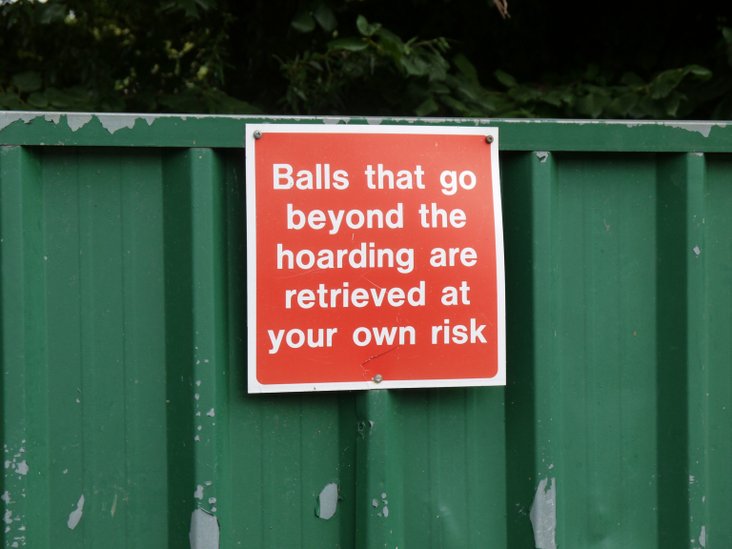 What lurks behind yonder hoarding- and do they need a licence for it?

Absolutely delighted. It was a help when televised football returned, but without any football at all during lockdown I realised how much the game means to me (and my soul)- not to mention how important I realised my club Whyteleafe is to me.

I am struggling with this so-called ’new normal’ but to coin a cliche 'it is what it is’ and it’s the same for everybody. It’s not going to affect the way I approach matches and the number of games I attend other than having to observe social distancing requirements etc.

Without doubt our FA Cup journey to the Fourth Qualifying Round. It was brilliant. We had coach rides to away grounds, went to places we wouldn’t normally go and met some really nice people along the way. We beat Cray Valley on a ridiculously hot day, then sorted out Isthmian side Merstham at home (comfortably) before we were on the road to Portsmouth to face Moneyfields and then Abbey Rangers (the fans at the latter two were brilliant by the way) before we had our big day back at Church Road against National League South side Chippenham Town- and our biggest crowd for years. The atmosphere inside Church Road was electric. To be honest we were well beaten on the day but not disgraced in any way, and their many travelling fans were very complimentary about our young team. Even the big bloke bashing that bloody bass drum all afternoon!

Another high point for me personally was the day we played away to Sevenoaks Town. We were ravaged by injuries, with two sixteen year olds in the back four and a seventeen year old in midfield, and I was fearing the worst to be honest. However, with all due respect to Sevenoaks (another lovely ground with nice people) we won that game at a canter. To me that showed the qualities of Harry Hudson’s youth development skills- although his assistant Calum McFarlane must take a lot of the credit for the youngsters coming through.

Without question early in the season when the mother of one of our players - a lovely lady - was taken ill and collapsed pre-match at our ground and tragically died. It doesn’t get any worse than that.

With a vibrant young manager like Harry Hudson we always have high hopes. He’s going to go a long way in the game, we just hope he stays with us for as long as possible. Leafe fans will be hoping to make the play-offs.

I like the burgers at Faversham! Best burger bar in our league by far. I enjoy going to most away grounds, though. There are a couple of exceptions but I’ll keep them to myself. Most fans, regardless of club are really friendly and welcoming. There are some hostile ones though, which I never really understand.

I like the quirkiness of Hastings United’s ground and the atmosphere is always pretty good there, while Ashford United can be a bit of a cauldron. For smartness I think East Grinstead Town takes some beating. It’s like one of those well-tended bowling greens – immaculate. Their groundsman obviously knows his way around a lawnmower! It always rains when we go there though! Sevenoaks Town is a petit and bijou smart little place that is also immaculate.

Well, geographically Chipstead, a few miles up the hill really but they aren’t in our division anymore. Back to Grinstead again I suppose. They are only about fifteen miles down the A22. There’s more rivalry this season because our old boss, Leigh Dynan is in charge there, now.

I guess we’d always relish going to Ashford and Hastings. Both aren’t local but there’s something a bit extra about those games. Two quality teams with two top quality managers and you are always guaranteed a good, tough but entertaining match.

We also developed a bit of a rivalry with Cray Valley last season. We beat them in the FA Cup prelim round, then in a league match they were beating us and it was abandoned because of an injury to one of their players and they’ve never really forgiven us for that abandonment. Then they comfortably beat us at our place in what was one of the final games of last season. They seem like a really good club, well managed with some really good players. I note we’ve just drawn them in the FA Trophy! Oh gawd ...

Aim to get there a bit earlier than you think. Sod’s law always dictates that when you are in a hurry the railway level crossings at either end of the ground are ALWAYS down and traffic can build up as a result. If you are coming by public transport then allow for the walk from the main road/stations (Whyteleafe and Whyteleafe South). Be prepared for people to talk to you. We like finding out more about your club and how you are doing.

Strangely a lad that was only with us for a few months and even then he left before the truncated season finished. He made a massive impact though. Ronald Sobowale.

Ronnie set our place alight. Powerful, fast and while he was with us he scored a lot of goals. Some of them outstanding. A 30-yard screamer (I know, I know, they all say that BUT it must have genuinely been 30-yards!) of a free kick at Chichester City to get us back in the game on a stinking hot summer evening was among the MANY highlights. He also has a unique penalty taking technique. No run up, no backlift but still manages to blast them in. A really nice young man too who endeared himself to our supporters.

I personally bet Ronnie £100 he wouldn’t score 20 goals by the end of September thinking it might be an incentive! I was handing his winnings over well before the end of the month!

 Sports News! Bedfont Sports announce who is returning from last season's squad- and bring back a fan favourite