It's Better Down Below: Adam Haddington, Lewes 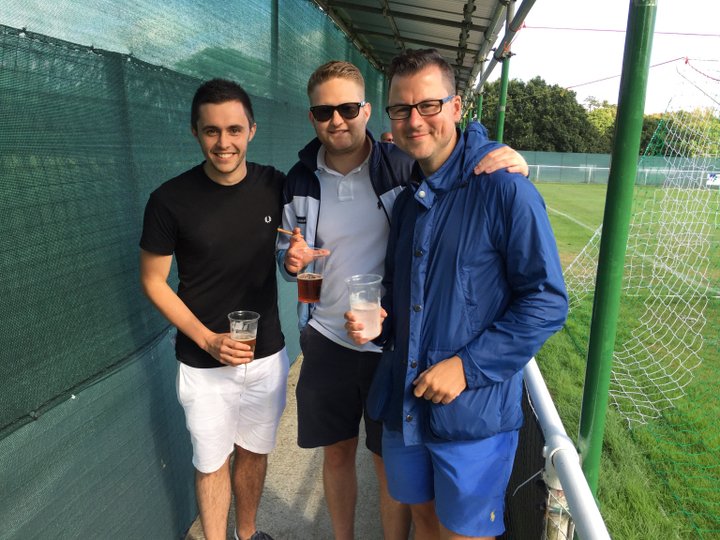 To commemorate the announcement of a European Super League, we thought we'd re-run a series from a few years ago about why Non League is best. Here's Adam's story.

Almost four years ago we ran a series of articles featuring fans of Isthmian League clubs who had given up on their former professional loves to follow our game. Following Sunday's Super League announcement and the ensuing fallout, we thought we'd run it again, all this week. Here's Adam's story.

Anyone addicted to Arsenal Fan TV could tell you that Gunners supporters seem a confused bunch at the moment. Should Wenger stay or go? Is Stan Kroenke actually interested in the club at all, or more worried about how many wild animal murders he can televise? Mesut Ozil- is there a point to him? And perhaps most importantly, is there a reason why everyone who gives an interview has to shout at the camera? 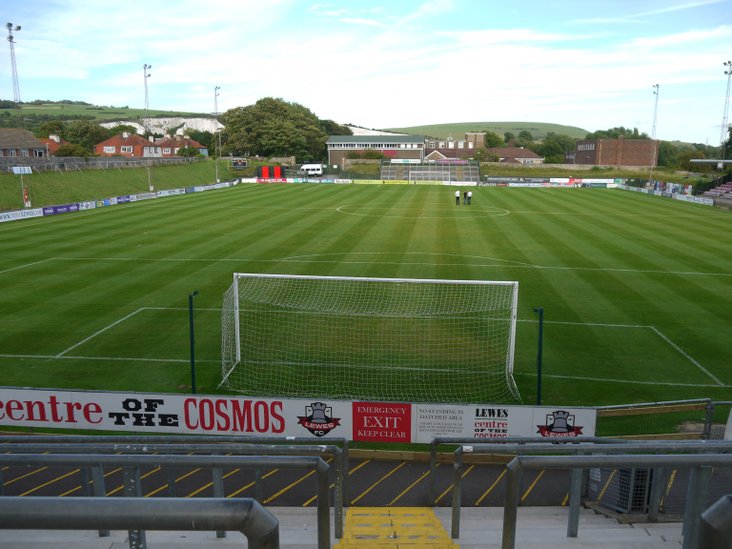 Adam Haddington, an Arsenal supporter for more than a quarter of a century, doesn’t worry so much about such matters anymore. These days he spends most of his free time on the terraces at the Dripping Pan, home of Lewes FC, and watches serenely- if regularly interrupted by the musings of Spooky and Cynical Dave- as his Rooks strive to climb out of the Isthmian South whilst being world leaders in championing football equality. We caught up to talk about most things red, and all things red and black. We began with the ranting.

“Arsenal Fan TV? I can’t watch it. Lots of swearing, and very little that makes any sense. If there’s one product that sums up the state of the world in 2017, that would be it. Nobody actually listens- they just shout and try to force their opinions on the audience. I used to have to walk past them filming after I left the ground, and there were people queuing up to get near the camera. It was just sad-and nothing has changed.”

Adam began following Arsenal twenty six years ago, influenced by the other children in his class at school, before going to his first match four years later, aged eight. Like most football supporters he can remember the experience distinctly. “It was at Highbury (29 August 1995), and the opposition were Nottingham Forest. Bruce Rioch was in charge, we had Wright and Bergkamp up front, and David Platt put us ahead in the first half before Kevin Campbell equalised for Forest. I loved the experience, and after that I just wanted to go all of the time; I’d get my dad to go along with me although he wasn’t really a supporter, as I was too young to go myself. I liked everything about the club but being quite young I was particularly taken with the kit- we had the ‘bruised banana’ away kit at the time, it was the first shirt I ever owned.”

Adam was quite clear that he has been rather lucky to have got to support Arsenal through their most sustained period of success. Asked about his high points, he had a list. “The run to the Champions League Final in 2006 was really special. It’s going to sound so cliched, but those nights under the lights at Highbury, beating better teams- like Real Madrid, Juventus, Villarreal- with what was a makeshift defence were just mind-blowing. The Invincibles season of 2003/04 too, that was just surreal”.

His low points, perhaps surprisingly, were all related to events off the field. “Leaving Highbury was the start. We went to this vast, amazing space- the first times I went I barely spoke, I just couldn’t believe how impressive it was- but it all went sour. There were so many lies connected with the move- we were promised ‘ten pound tickets,’ that we were ‘going to compete with the best,’ the idea was peddled that we turned down the chance to sign Xabi Alonso because it would ruin the career of Denilson and the ‘youth project’ was more important- and after a while the dishonesty just began to grate. Since David Dein left the club has been run by people who seem to have no understanding of football, no care for the club or relationship with its supporters…you’re going to have low points on the pitch whoever you follow, but unfortunately the way the club was run eventually blighted my relationship with it, and my enjoyment of watching the team.”

So how did he end up a regular at the Dripping Pan?

“It came about somewhat by accident. I live in Sussex and decided to watch some Non-League; I was fed up with the whole idea of modern football, matches being moved to Sunday afternoons and Monday evenings, the politics of the club- I was losing my enjoyment of the entire experience. The initial idea was that I’d watch a number of our local clubs, and then I went to a match at Lewes- the opposition were Met Police- and I found myself celebrating like a local when we pulled a goal back. And no, I wasn’t drunk- I’d only had two pints! I’d planned to go to Worthing the week after, and then to try Whitehawk, but I ended up feeling so welcome, so involved in the experience that I just kept coming. They had me hooked; it was fun. We’d lost the game, but I’d really enjoyed it.

There’s something special about Non-League football. A number of my mates now come to Lewes, too- there were ten of us at New Year-and to be able to stand on the terraces together, have a beer, and be treated like grown-ups is special. That last point should be unnecessary but in the Premier League you’re not trusted to be an adult, not trusted to be able to have a drink without misbehaving. And in Non-League everything is made relatively easy for you. If you were able to have a ‘football supporters checklist’ of things that would make the experience work, you’d want an easy train journey, a destination with good pubs, a nice ground- the Pan is just beautiful- the ability to have a drink on the terraces, decent quality football; well Lewes ticks all of those boxes. The people are fabulous, too- from Stuart the chairman, Barry in the club shop, Barry who does the media stuff, Barbara who does the raffle, Ethel with the 50/50 tickets, Gary with his badge stall- everyone has time for everyone else. And the players work so hard- they care, the management team care, nobody is in it for the money. The experience is inexpensive and enjoyable, there’s nothing not to like.

My partner and I are actually moving to Lewes shortly, to a property which overlooks the ground- although I only get a view of one goal. It’s like Nick Hornby’s Fever Pitch- the Rooks Years!”

The club’s community ethos was a factor too.

“I became an owner the day after my first game. Whilst I might not agree with every decision made- that would be unhealthy- I want to give the club that commitment. And I have a voice, not only do they listen, they ask. There aren’t many clubs where the Chairman comes and actively searches for your opinion.”

It was time for the question that he was undoubtedly dreading. After all, he’d been following Arsenal his entire life, Lewes for only a few years. How can you stop loving your first football love? But it had to be asked. If the clubs were to play each other, who would he support?

“It’ll never happen, it could only be a cup game and Lewes are rubbish in the cup!” That was something of a cop-out, and when pressed he became more forthcoming.

“Look, I went back to Arsenal on Saturday for the first time in ages. My dad went to Lewes. I spent the entire game trying to keep in touch with what was happening at the Pan, and I’m not sure I watched the football in front of me at all! At one point I asked my dad who had scored, and he replied that it was number 11, but I misread it, thought it was 1-1, and spent the rest of the match worrying about it because I so wanted us to win and couldn’t connect to the internet! Arsenal were beating Bournemouth convincingly and I’m taking no notice! I think that tells you where my heart is at the moment.

Beyond that, such a match would be a big deal for Lewes. It’s a difficult question to answer, the love of most of my life versus my new-found love, but it would be so much more important to the Rooks.”

It’s easy to understand why a football supporter- indeed, any football supporter- would be seduced by the charms of the Dripping Pan. Steep terraces behind each goal, wonderful views of the South Downs, and as Adam points out, fabulous people. But how could he be sure that his love of Lewes wasn’t just a passing fad- a fad which might fade if Arsenal suddenly became invincible again?

“I can’t ever see me being a regular at The Emirates again, although, if I’m being honest, if you’d have asked me three years ago whether I ever saw myself NOT being a regular at Arsenal I’d have thought you crazy for asking the question. But I don’t see me going back. I’ll perhaps take in the occasional game, but I’m entirely out of love with what modern football has become. The whole game is awash with money. Just look at the recent Champions League game between Celtic and Paris St Germain as an example- you’ve got Celtic, who are the equivalent of a Junior School bully in Scotland, having to step up to Senior School where the big boys beat them up. It’s just about the amount of money in the game rather than anything that relates to the communities in which the clubs are based, and I just can’t relate to it anymore. Lewes shouldn’t feel old-fashioned, the club is well run and forward thinking, but it still resembles what football used to be about.”

Lewes are never likely to resemble a bully, Junior School or otherwise, and to some extent most Arsenal supporters seem to want to see their club do far more bullying that they currently manage, but it isn’t difficult to understand the point that Adam is making. He, like many football supporters, has a hankering for a simpler time when football rather than finance was king.

The day may never come when he speaks about Jamie Brotherton the way he waxes lyrical about David Rocastle, but his dedication is clear.