It's better down below- Gary McGetrick, Dulwich Hamlet 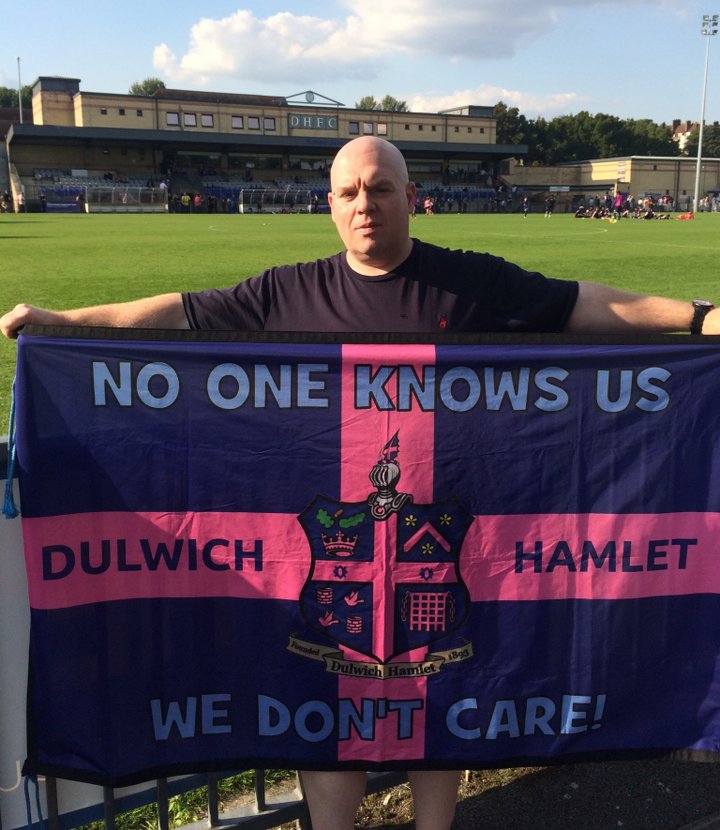 To commemorate the announcement of a European Super League, we thought we'd re-run a series from a few years ago about why Non League is best. Here's Gary's story.

Almost four years ago we ran a series of articles featuring fans of Isthmian League clubs who had given up on their former professional loves to follow our game. Following yesterday's Super League announcement, we thought we'd run it again, all this week. Here's Gary's story.

Last month the results of the latest Football Supporters Federation survey were released, and the outcome was rather startling. Only a third of the eight and a half thousand respondents felt that their club cared about them. Almost one fifth said that they wouldn’t be renewing season tickets this season and more than a third that they attended fewer matches than they used to, with cost the major factor. More than eighty percent wanted the opportunity to stand whilst watching a game, and 42% stated that they’d had to miss a game last season because it had been moved for TV. 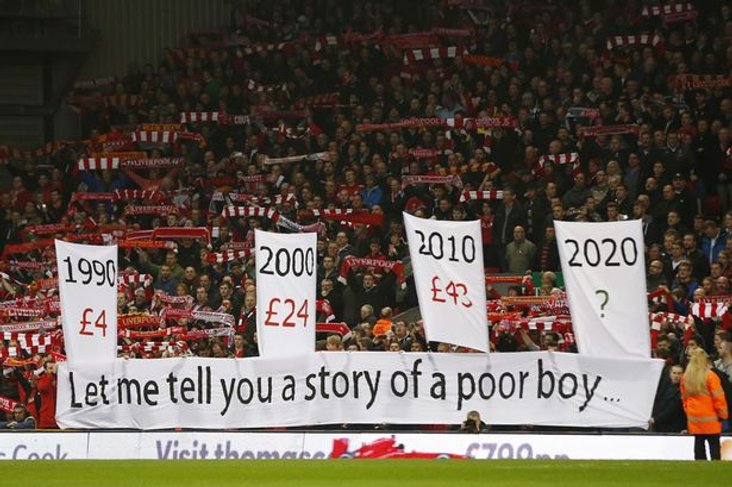 With results like these it is perhaps unsurprising that a growing number of supporters are moving away from the professional game, particularly the Premier League, instead connecting with their local non-league side. In this series we will speak to some of those supporters, and find out what prompted the change in their supporting habits- and what keeps them dedicated to their Isthmian League favourites.

For as long as he can remember Gary McGetrick has supported Liverpool, despite being a South Londoner. Like many he was indoctrinated at a very early age.

“My dad was originally from Liverpool, so I was brought up to support the club. Being born in 1976 that wasn’t too much of a hardship, there was lots of silverware! In November 1983 he took me to my first game, a League Cup match at Craven Cottage against Fulham. It was nil-nil at full time, and being midweek I had school the following day so in around the one hundred and fifth minute he took me home. Of course as soon as we got back into the car and turned the radio on, Liverpool scored- my first match and I hadn’t even seen the goal!

When I was around twelve I started going to watch them regularly when they played in London- in those days you could still turn up and pay at the gate- and occasionally my Dad would take me to Anfield. Then as I got a little bit older I’d go up to Liverpool occasionally with my mates, and on one occasion I went to Manchester with my friend from school who was a United fan, stood on the Stretford End and kept my mouth shut! But it wasn’t until I left school, got a job and learned to drive- so I’d have been about seventeen- that I started to go regularly.“

Being a Liverpool fan from a period when the side regularly used to pick up silverware you might have thought it would be difficult for Gary to pick a high point, but he’s quite clear- it all comes down to one particular night in Istanbul. “I was there. We came from three-nil down to win the European Cup once more; you’d struggle to have a night as a football supporter of any club to compare with that. Two thousand and one was special too- we won three cups, the League Cup, FA Cup and UEFA Cup. But I’ve been very lucky, getting the chance to see players like Ian Rush and John Barnes on a regular basis.”

Gary’s dedication to Liverpool comes across throughout, so it seems inexplicable that he would decide to stop following the Reds, but stop he did. Why?

“Money was the deciding factor. I suppose, though, if I was to pin it down to one moment then it would be the 2012 FA Cup Final against Chelsea. I’d hunted around for a ticket for the few weeks preceding the match, without success, and on the day of the game I got a message from someone I worked with who had a ticket for me- indeed, was happy to give it to me. So I’m on the tube on the way to Wembley, and there are two couples sitting opposite me discussing the game. I’m listening to them talking, and it’s clear that they don’t even know who’s playing. It dawned on me at that moment that the football I used to love had gone. It used to be about the game, the spirit, the camaraderie- now it’s all about money and status, the opportunity to brag about a social occasion. I didn’t abandon the Premier League at that moment, but that was definitely the day that I began to think long and hard about my relationship with the game.

So when did the relationship between Gary and Liverpool come to an end?

“Last season I didn’t go to one single Liverpool match. Over the last few years I’d gone less and less, and then last year- for the first time in more than a quarter of a century- I didn’t go at all. I was offered tickets on a number of occasions, but although I thought about it my heart wasn’t in it at all. I’d rather watch Dulwich Hamlet. Beyond that, I don’t think that sixty pounds to watch a game of football is good value; it isn’t that I can’t afford to pay it, rather than I don’t think the experience is worth the outlay. And the game has changed- it’s all about rich owners trying to buy success. That’s all well and good but it irrevocably changes the character of the clubs, it damages the link between the team and the supporters.

At Hamlet’s level the players still want to play football because they love football. It isn’t just about how many thousands of pounds a minute they might earn. More than that, it’s football the way I remember if from my youth. I love the fact that I can stand, I love the fact that I can have a beer while I watch the game; it’s raw, it’s real, the way football was when I grew up before it became more about the money than the game.”

Living in South London Gary could have had his pick of a number of non-league teams. Why, then, did he decide on Hamlet?

“It’s three miles from where I grew up. More than that, I knew someone who was involved at the club- is still involved at the club, he’s Vice Chair now- so I was always aware of the club as a kid. I used to go to the odd game, and as I started getting irritated with the Premier League and watching Liverpool less I found myself watching Hamlet more, until eventually it was all Hamlet and no Liverpool. There was no plan for that to happen, it just kind of crept up on me, but Hamlet made it easy to get involved- there’s no having to try to buy tickets three months in advance, no chance the match is going to be moved for TV, and even with away games you know you’re going to be able to turn up and get in. The people are friendly and the atmosphere is good. The pricing is good too; I have a season ticket and so has my daughter, and the pricing structure for children is fabulous- she’s thirteen so she pays thirteen pounds, kids all pay their age.

But it’s more than that. The club actively encourage supporters to get involved, to voice their opinions- and they listen. If you make a good suggestion there’s a decent chance they’ll think about it and implement it. Imagine them doing that in the Premier League! The football is entertaining too- Gavin (Rose) sets the team up to attack, and the players have a good attitude, we don’t get the diving and feigning injury you see at a higher level."

His relatively new found love of the non-league game is quite apparent. Has he managed to persuade more of his Premier League supporting friends that they should head in the same direction?

"People have a perception that the game at our level isn’t very skilful. They’re entirely wrong. It’s a good standard and nearly always entertaining- and more than that, the experience is positive, and the people are always friendly. There are so many good old fashioned grounds, too- I love the big terrace at Folkestone Invicta, Canvey Island is great, and then there’s Lewes- my friends who are into football would appreciate that as much as I do, I’m sure."

Gary has spent most of his life supporting Liverpool, and only the last few following Hamlet. On that basis there’s one obvious question. If Hamlet got to the Third Round of the FA Cup and got drawn to play at Anfield, who would he support?

“My wife asked me that exact question last week! It’s really difficult. In honesty I’d probably be happy either way, but a big part of me would want Hamlet to succeed. But I don’t really know. I know it’s a cop out, but a can’t really answer that question. I have both teams in my heart.”

So, the sixty four thousand dollar question. Could he see himself giving up the delights of Champion Hill and heading back to Anfield?

“As a regular? No. Definitely not. I’ve thought about it, and I’m not saying I’d never go again- I’d like to see the new main stand- but I can’t see myself ever going back regularly. I don’t miss it. If Liverpool are on the tv and it clashes with a Hamlet match- well, I go to Hamlet. My priorities are clear.”

If there was any doubt whatsoever about Gary’s allegiances, his final statement cleared them up once and for all.

“At Liverpool, I’m a number. If I vacate my seat someone immediately comes along and sits in it. At Hamlet, I’m important to the club, we all are- and they demonstrate that. The people in charge want to talk, the players want to talk, I’m actually part of something- a participant rather than just an observer.”

In the Premier League, perhaps not so much.