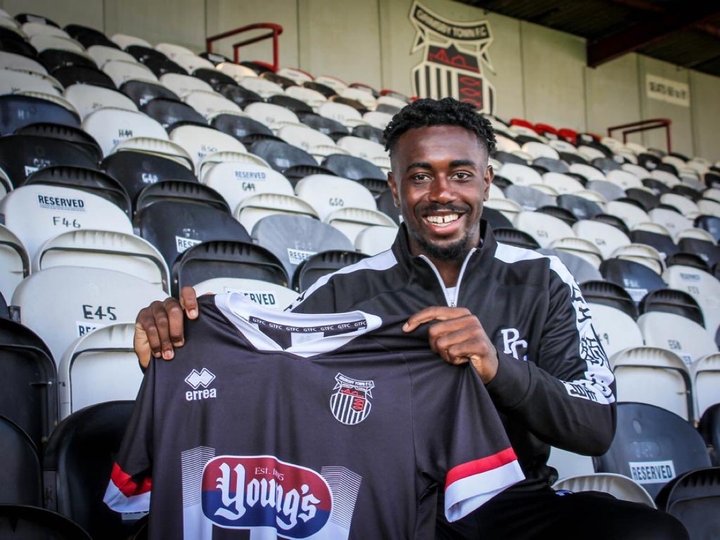 Invicta's star striker gets a professional deal at Grimsby

Folkestone Invicta striker Ira Jackson is off to the home of the UK fishing industry, as he has signed a professional deal with Ian Holloway's Grimsby Town.

Ira moved to Invicta in January of last year, and at that point the jury was out on whether he was a striker or a winger, but seven goals in fourteen appearances- many of them cutting in from a wide position- saw him swap the number eleven shirt for the number nine during the 2019-20 campaign, and how he responded- scoring twenty six goals before the campaign came to a premature end.

Ira spoke of his gratitude to Invicta after signing a two year contract with the Mariners, making the following statement on social media:

"I would like to thank Folkestone Invicta for an amazing 18 months with the club! Neil Cugley, Edgy and Mev gave me a phenomenal platform to be able to show I was the player that I believed I was and worked so hard to be! There were a lot of firsts at this club and I will forever be grateful.

To the fans and to the players who have supported me on this journey of trying to reach a goal of becoming a professional footballer. Any young player that believes in their ability and wants a platform to show that and the right support, Folkestone Invicta is the best club to do that."

"He's a two-footed centre forward who scored a lot of goals last season. He's been concentrating on a degree at 23 years old and now he's finished that, he's going full-time.

He's had lots of choices but he's chosen us and I've chosen him so I am absolutely delighted at it. He gave me a really good time yesterday and I can't wait to work with him really, he can play anywhere along the front, on the right, in the centre or on the left, so as we lost Charlie and Billy, I need to bolster that area and he's of that age where I believe he will become a saleable asset to us."

Good luck Ira- we're sure you'll grasp this opportunity and light up League Two next season!

Image courtesy of the Grimsby Town website and taken by Sam Strandt.

FA Handbook for 2020-21 now available  Some light reading for those of you who love rules and regulations...and who want to find out about promotion and relegation