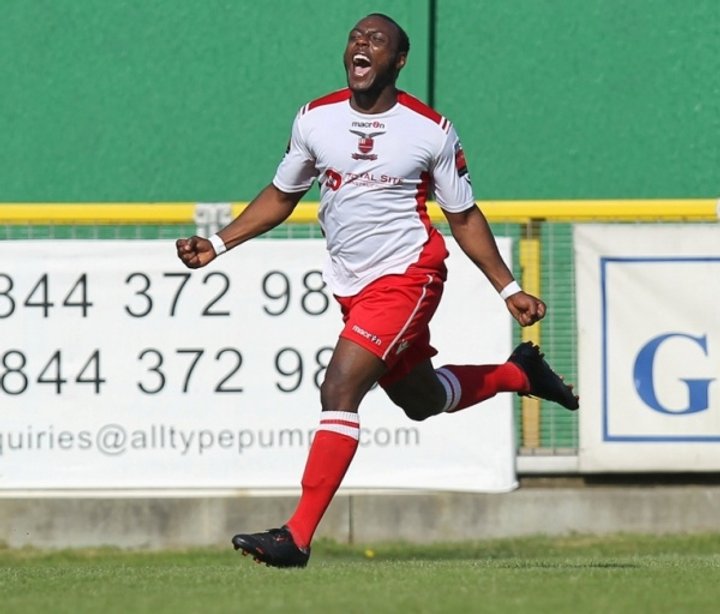 THERE was no shortage of surprises in Ryman North, starting at Sudbury where the hosts, widely reckoned to be the title favourites, crashed to a 3-1 home defeat by Cheshunt.

Jose Espinoza was the man of the hour for the visitors, heading them into the lead shortly before half-time and then, after Sudbury had wasted chances to hit back, adding the second on 80 minutes. Leon Antoine’s 89th-minute header gave Sudbury a little hope and there was time for a further goal. But it came from Cheshunt’s John Megicks.

Promoted Wroxham are expected to be among the promotion challengers but their Ryman debut brought a 2-1 defeat at Potters Bar. James Gershfield did the damage with two goals in five minutes in the middle of the second half and Matthew Blake’s 83rd-minute counter could not save the Yachtsmen.

“We won’t win a game all season,” one pessimistic Redbridge follower told me this week. Their young side wasted no time in proving him wrong as they came from behind to chalk up a 2-1 away victory over Romford, who are now sharing Thurrock’s ground at Ship Lane. It certainly didn’t look good for the Motormen when Romford skipper Jack Barry headed them into a 14th-minute lead. Romford had more of the game after that but Sibi Muwanua emerged as the Redbridge hero with an equaliser six minutes after the break and the 87th-minute winner (after which his celebration is pictured, courtesy of Gavin Ellis/TGS Photo).

Relegated Aveley were another side with pessimistic supporters but they came close to a home victory over fancied Maldon before drawing 2-2. Junior Dadson gave Millers a second-minute lead which was answered by an Ollie Berquez header midway through the half. Although the visitors then took control, it was Aveley who regained the lead through Paul Burnett in the 63rd minute. But they had Ellis Sands sent off for a ‘professional foul’ on Mitchell Das with ten minutes left and further punishment followed when Jamie Guy hammered home the resulting free-kick.

Brentwood are also expected to be in the promotion mix but they needed a Steve Butterworth goal in the third minute of added time to salvage a home draw against last season’s play-offs semi-finalists Tilbury. A header by promising 18-year-old winger Tom Wraight had given Dockers into a 74th-minute lead.

Striker Warren Mfula made something of a name for himself when he scored more than half Clapton’s Essex Senior League goals in the season before last. He has now stepped up to the Ryman League with Ilford and so far has 100 per cent of their goals! Two, in fact, and they gave the Foxes a 2-1 victory at Soham. The hosts should have scored several times before Mfula netted on 43 minutes. Robbie Mason headed the equaliser before half-time but Mfula had the last word with a 65th-minute penalty.

Needham Market’s prolific scorer Sam Newson lost his touch last season after suffering a bad injury before Christmas but regained it with a hat-trick in their play-off semi-final and looks set to shine again this season after his double gave the Marketmen a 2-1 victory at Ware. The hosts, who had a reprieve from relegation last season, took a shock lead after seven minutes when Ryan Fleming floated a shot into the net from close to the halfway line. Newson pounced on a loose ball to equalise shortly before the interval and polished off Danny Bloomfield’s pass for the 69th-minute decider.

Grays launched their promotion bid with a 3-0 win at Waltham Forest. Danny Bunce gave them the lead with an 18th-minute penalty, James Bunn fired the second from a tight angle on 70 minutes and the talented Joao Carlos added the third seven minutes later.

Chatham romped to the top of the season’s first table by trouncing visitors Waltham Abbey 4-0. Two goals came from vastly-experienced summer signing Jean-Michel Sigere, the opener after 18 minutes and a second immediately after the interval. Gary Tilley got the other two, on 38 and 78 minutes, and three of the goals were set up by another debutant, former Maidstone man Ryan Palmer.

Promoted Witham celebrated their return to Ryman League football after three years with a 2-1 home victory over Thamesmead. Jason Fontaine got on the end of a long clearance to put them ahead on 40 minutes and Danny Emmanuel netted in similar fashion in the 56th minute. Thamesmead threatened to rally when home skipper Scott Pethers was shown a second yellow card after conceding a 76th-minute penalty which Ashley Probets converted. But Witham held out.

Harlow took the points at Heybridge where, after 82 minutes of scoreless deadlock, Sam Deaney headed home a cross from fellow-sub Jordan Knight. Ben Newson earlier struck a post for the home side.

 Four-goal K's on top for now KINGSTONIAN (pictured by Andy Nunn celebrating one of their goals) moved to the top of the Ryman Premier table, at least for 24 hours, with a 4-2 home win over Harrow tonight (Monday).

Swans spoil homecoming in nine-goal thriller  A MASSIVE crowd of 1,569 turned out for Maidstone’s first Ryman South game at the Gallagher Stadium, their first league game in their home town for 24 years, and they were certainly royally entertained even the result was not what the majority of them wou