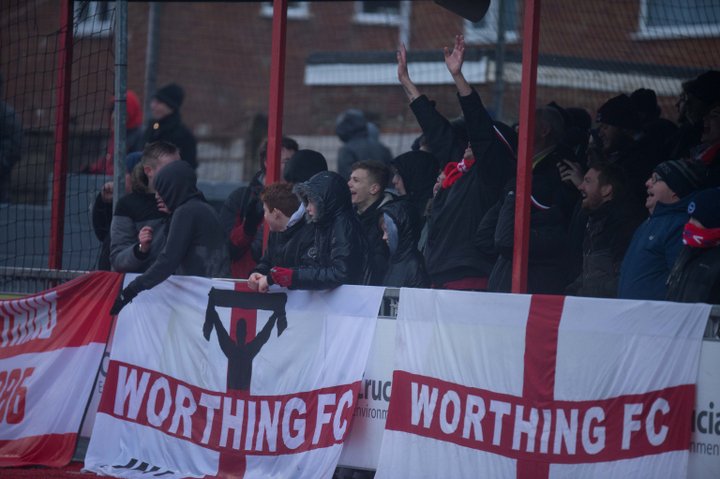 After two matches of last season Worthing were sitting forlornly at the wrong end of the table, with no points, no idea when they’d be able to play a match at their own ground after problems with the pitch at Woodside Road, and with rumblings of discontent in the dressing room and on the terraces. What a difference twelve months makes!

The revolution started by returning manager Adam Hinshelwood half way through last season reached its zenith at Colston Avenue last night, and Worthing now sit proudly on top of the league with six points from their first two matches. They had to earn them the hard way, after Ricky Korboa gave Carshalton Athletic a first half lead, but two goals in two second half minutes from David Ajiboye sent the travelling hordes back to Sussex with vertigo! Ajiboye joined the Mackerel Men in the summer, his second spell at Woodside Road after a short period on loan from Brighton & Hove Albion during 2016-17, and he seems to have found his feet quickly, his double last night following two more in pre-season.

Worthing may stay at the top for less than 24 hours, as we have an- almost- full programme of Premier Division fixtures tonight. The match of the day looks to be Dorking Wanderers playing their first ever competitive fixture at their brand new Meadowbank Stadium, and their promising squad will face a tough test with the arrival of Margate, 5-2 winners at home to Corinthian-Casuals on Saturday. Casuals also celebrate a first tonight- their first Premier Division home game, and they have another tough match against a side from Kent, Folkestone Invicta arriving in Tolworth with a point to prove after falling to defeat at home to Enfield Town on Saturday.

The Towners will follow up that victory with a home match against Bishop’s Stortford, whilst not too far down the road Wingate & Finchley will try to turn around their fortunes after their loss to Worthing with victory over AFC Hornchurch. Harlow Town are at home to Burgess Hill Town, both sides looking for their first point after defeats in Sussex on Saturday, whilst at the seaside Bognor Regis Town host Merstham whilst Brightlingsea Regent entertain Haringey Borough.

Potters Bar Town have their first ever Premier Division home match to look forward to, Kingstonian providing the opposition, whilst the final match sees Tonbridge Angels take on Lewes at Longmead.

Come back here for a round up tomorrow.

Thamesmead like them, and hope they care!  Mead try to tempt the Millwall masses!