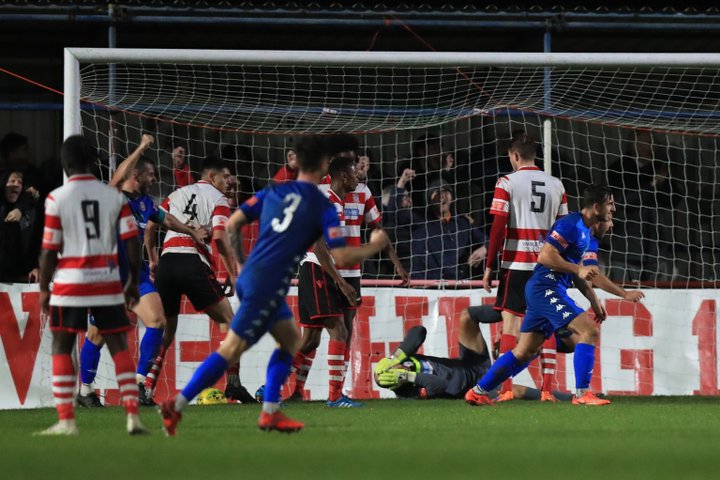 Kingstonian went into last night's match with Worthing hoping to reclaim the top spot relinquished to Enfield Town on Tuesday night, but instead the plaudits went to visitors Worthing, who were victorious for the fifth match in a row to leapfrog the K's into second place.

Ollie Pearce was the Worthing star in the first half, scoring not once, not twice, but three times to send the Mackerel Men in at half time three-one up. The K's goal came from Declan Skura, who brought them level in the twenty sixth minute- but that parity lasted only nine minutes before Pearce got his second, and his third came just before the break.

Kingstonian came out for the second half fired up, and three minutes after the restart Rhys Murrell-Williamson got a goal back. The equaliser came nearly twenty minutes later, Bryant Akono Bilongo with that one to the delight of most of the four hundred and three in attendance- but the last word came to the visitors. With fifteen minutes left Jesse Starkey curled in a corner, and it evaded every attacker and K's keeper Tolfrey and ended up in the back of the net. Another comeback was mounted by the hosts, but this time it found no reward.

The match was streamed live by the Non League Banter show, below we have both halves, as well as an interview with Pitching In Isthmian League Chair Nick Robinson.

And here are Mick and Nick!

Pitching In Isthmian South East- Stat Watch- attendances  Last in our series looking at attendances from the first two months of the season, we head South East