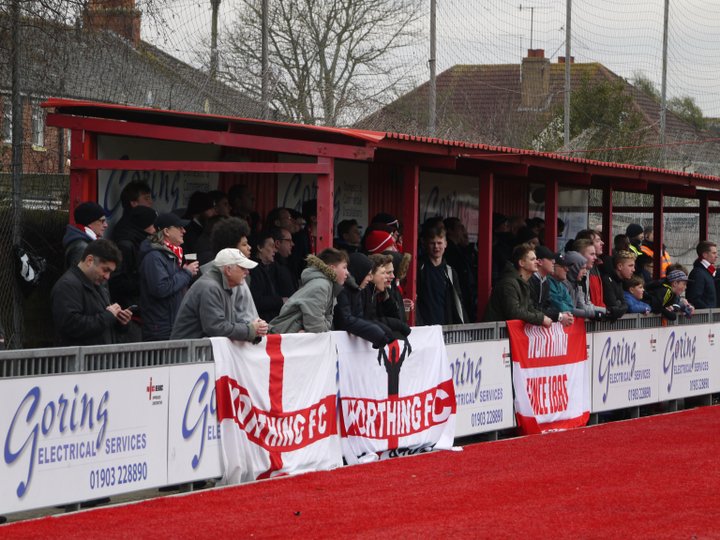 With five minutes to go last night, Lewes looked set to extend their unbeaten run to thirteen matches- and to move up to seventh place in the Bostik Premier League. 3-2 up and playing against ten men, Sussex bragging rights were undoubtedly assured- what could possibly go wrong?

And then Worthing decided to ruin the Rooks party, and send most of the 745 in attendance home miserable.

It had all seemed so positive for the home side little more than fifteen minutes earlier. Danny Barker- who had opened the scoring for Worthing in the first half- had just been given his marching orders, and Thomas Day had taken advantage to give Lewes the lead for the first time. All they had to do was close out the final quarter of an hour. But then Ollie Pearce, on as a substitute and formerly beloved by Worthing's greatest rivals, Bognor Regis Town, grabbed an equaliser. Surely that was that?

But no! Four minutes into added time Joe Clarke managed to send a free header into the net- and sent the Mackerel Men into fish heaven!

It had started well for Worthing, Barker's opener coming in the 22nd minute, but by half time James Hammond and Ronnie Conlon had made it advantage Rooks. Alex Parsons managed an equaliser thirteen minutes into the second half, but Barker's dismissal seemed sure to turn the game- and indeed perhaps it did, in favour of the ten men.

Worthing leapfrogged Bognor into second place, a point behind Tonbridge Angels, and there will undoubtedly have been a late party at Woodside Road last night, after the travelling hordes had negotiated the crowds on the A27 celebrating the decision to build a new Ikea at Lancing. Matchday meatballs- what could be better?

Both sides now turn their attentions to the FA Cup. Lewes travel to Bath City, whilst Worthing will hit the A27 once more, heading west this time, bypassing Bognor and ending up in Portsmouth, where they face Moneyfields- conquerors of Hayes & Yeading United in the last round. We'll be at Lancing to watch Horsham take on Poole Town for our #bostikmatchday feature.

The match programme from last night is available here.

 When Romford beat...Ghana New exhibition looks in depth at the 1951 visit of the Gold Coast touring XI to Brooklands