Mackerel Men wallop Wingate- whilst the Towners keep up the pressure 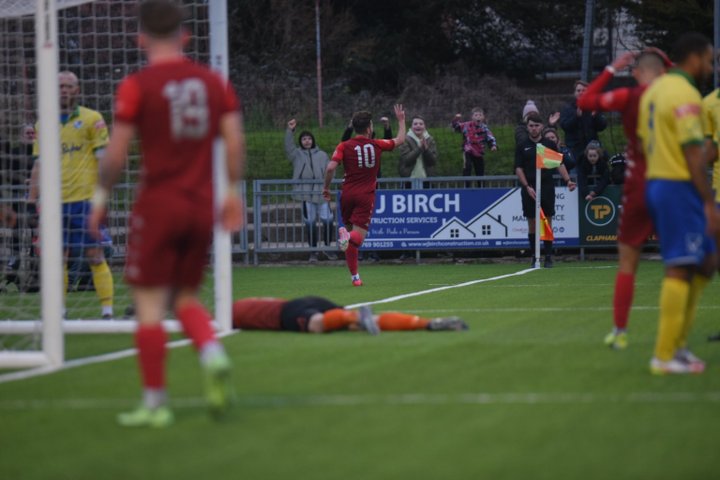 The Scholars shock the K’s, Wands hit three, and we’ve also wins for the Rooks, the Ambers and Margate. It’s our Pitching In Isthmian Premier round up.

Our leaders, Worthing, welcomed Wingate and Finchley to the seaside after seeing their lead at the top cut to two points by drawing two of their last three. The visitors had lost to the Mackerel Men the last six times they’d met- and six was once again a lucky number for Worthing as that’s how many they scored, whilst making it seven in a row against these opponents. Callum Kealey and Ollie Pearce made it two before the break, and after it Jasper Pattenden, Aaran Racine and two more from Pearce made it six- that’s thirty three for the season for the Worthing number ten, thirty of them in the League- and you can see him celebrate the last of those above, courtesy of Marcus Hoare.

Second place Enfield Town started the day two points behind Worthing with a marginally better goal difference. They ended it two points behind with a marginally inferior goal difference, despite scoring four at Bowers & Pitsea. Bowers had taken four points from six, but never came close to taking any this time around, even though, for once, Mo Faal didn’t find the net for the visitors. Lyle Della-Verde opened the scoring for Town in the sixth minute, Jeremiah Gyebi made it two seven minutes before the break, Sam Youngs had added a third before the half time whistle went, and although Norman Wabo got one back for the hosts just before the hour a late Jake Cass goal made it four.

Lewes are up to third after victory against East Thurrock United. The Rooks had seen their four game unbeaten run come to an end at Hornchurch last time out, but must have been confident against the Essex side, as the Rocks had lost five in a row and seven of their last eight. In the event it was much closer than the home fans would have liked, despite their side taking a two goal lead into the interval through Juevan Spencer and Razz Coleman De-Graft. Johnny Ashman got one back for the visitors just after the hour, and after nearly half an hour of nervousness Casey Petit made it three-one just before the end only for Ollie Miles to almost immediately bring it back to three-two from the spot. The Rooks held on for the points, and are eight points off the top and six behind second place Enfield.

Bishop’s Stortford slipped to fourth after sharing the spoils in a six goal thriller against Corinthian-Casuals. It must have looked like a three point certainty to the home fans after Frankie Merrifield gave them a first minute lead and Chris Harris doubled their advantage only thirteen minutes later, but Casuals are made of stern stuff this season and Alfie Bendle got them back into the game on eighteen minutes. Ben Marlow restored the two goal cushion for the hosts eight minutes after the restart, but within two minutes Kieron Cadogen had one back from the spot and three minutes from time Bendle earned a point for the visitors.

Folkestone Invicta, who won seven-nil last weekend, were hoping for more of the same as Carshalton Athletic came to call- but these visitors are made of stronger stuff. The hosts took the lead through Luke Wanadio ten minutes after half time, the winger adding to the three he got last weekend, but Athletic were quickly level, Daniel Bassett equalising just after the hour mark. That was that, Invicta in fifth, Athletic seven points behind in eighth.

Hornchurch have been in magnificent form and picked up Manager of the Month and our Golden Gloves awards for January. They were hoping they could beat the curse, and perhaps they did, but they couldn’t beat Haringey Borough in a six goal thriller. Borough were ahead after just two minutes, Mekhi Leacock-McLeod opening the scoring, but by half time it was advantage Urchins as Liam Nash and Charlie Ruff turned things around. The equaliser for Borough came five minutes after the break, Jorge Djassi-Sambu with it, but five minutes later the Urchins, who had won their last three meetings with Borough, made it three-two, Liam Nash with his twelfth of the campaign. Again the hosts weren’t done, and David Olufemi secured them a point eighteen minutes from time.

Kingstonian welcomed a Potters Bar Town side who were on a terrible run, having lost seven in a row, but new boss Sammy Moore watched his side turn that around at King George’s Field. Joseph Boachie put them ahead on thirteen minutes, and although Jerry Puemo equalised six minutes before the break Jaden Sharman gave the Scholars the lead once more with twenty three minutes left, and this time they held on to it.

Margate welcomed Horsham to Hartsdown Park. Neither were in the greatest of form, and only one goal separated the sides at the end of this one. It came in the very last minute, and to the delight of those in Blue it came to the hosts, Lewis Knight getting it.

Cheshunt had really gone off the boil in the league, with only one point from fifteen, but they got back to winning ways as they welcomed bottom side Leatherhead. The Tanners were unbeaten in three but couldn’t make it four, Daniel Ojo getting the only goal of the game fifteen minutes from time.

Bognor Regis Town got back to winning ways with a comeback victory over Corinthian-Casuals in midweek, and they ended Brightlingsea Regent’s unbeaten run at Nyewood Lane. Regent were three games unbeaten, but they couldn’t make it four. Harrison Brook gave the Rocks the lead six minutes before half time, Dan Gifford doubled their advantage seven minutes after the break, and Aaron Blair’s last minute goal for Regent was just a consolation.

Finally, Cray Wanderers hosted Merstham. The Wands got back to winning ways in midweek, but were seven points behind the Moatsiders and it seemed that three points was a must- and they got them by scoring three goals. Chris Dickson gave them the lead in the fifth minute, Kyel Reid doubled their advantage eleven minutes later, and Etahn Kaiser made sure with the third on fifty nine minutes.

 Millers bury Bury, whilst the Gulls keep up the pressure We’ve two points between the top three after a day with few goals. It’s our Pitching In Isthmian North round up.

Non League Day 2022  March 26th will be this season's big day- time to get planning!