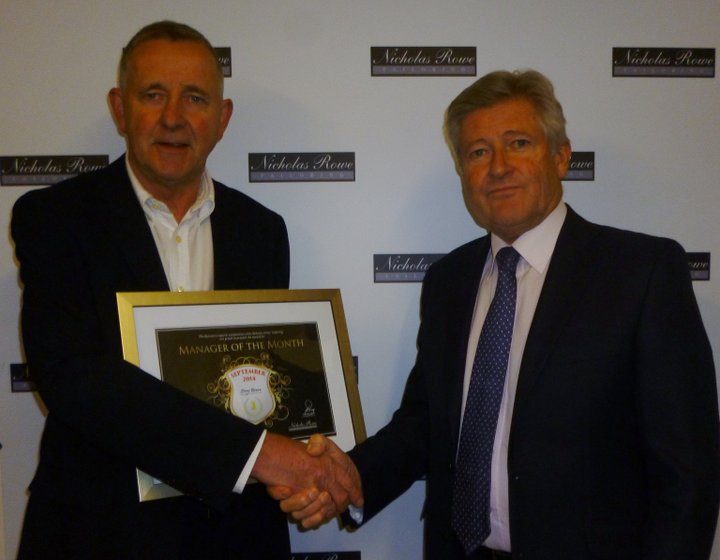 Manager of the Month

Margate’s Terry Brown could be wearing one of two new suits if he's heading out on New Year's Eve as a double winner in the Ryman League’s Nicholas Rowe Tailoring Manager of the Month Awards.

Brown, whose table-toppers host Lewes on New Year's Day at Hartsdown Park, was the inaugural winner of the Ryman Premier’s managerial accolade back in August and is pictured collecting his second accolade of the campaign from Nicholas Rowe after being named as one of November's three winners alongside Brightlingsea Regent’s James Webster in Ryman North and Hayden Bird at Ryman South Merstham.

As well as being presented with framed certificates to mark their achievements, the trio have all been getting measured up for bespoke new suits at the Surrey-based suit and menswear specialists who agreed a unique new sponsorship partnership in August to kit out all the Ryman’s top monthly managers and overall managers of the year.

Like all winners, Brown was able to choose from three colours at the long established company’s 7000 sq ft 'Suit City' in Redhill.

There is no restriction on the number of suits managers can win for their performances in Ryman League fixtures but joint managers have to win more than one award to both be kitted out as the monthly prizes are restricted to one suit per winning club.

Former AFC Wimbledon manager Brown took the top flight's honours for the second time this season for guiding his title-chasing side to three wins, one draw and a single defeat in league action during November.

For more information on the award's sponsor, visit their website at: www.nicholasrowetailoring.co.uk

Major improvements for Motormen  CHANGE is the word that sums up Redbridge’s Oakside facilities this week as the clubhouse, pitch and surroundings near the car park have been revamped ahead of the new season.