Margate take over at the top 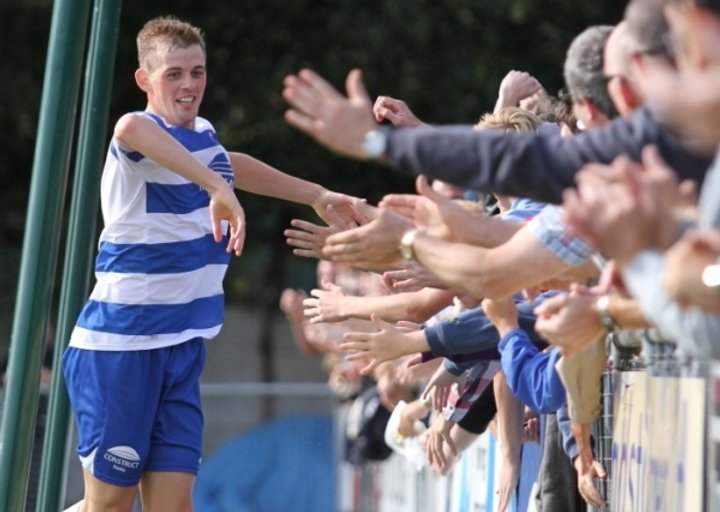 Carl Rook put them ahead after only seven minutes and Tommy Murphy added a superb second just after the half-hour, beating three players before firing home from 25 yards (his celebration is pictured by Don Walker).

The top two at kick-off time clashed at Hampton, where the game started 25 minutes late after Lowestoft had run into trouble on the M25. It did not seem to affect them as, with ten minutes in the clock, Jack Defty headed the first goal conceded by Beavers in 550 minutes of league and cup football this season.

Charlie Moone replied nine minutes later with a 30-yard blockbuster and that was the end of the scoring in an increasingly scrappy game. Hampton’s Tom Hickey was sent off towards the end.

Hampton dropped to second and Lowestoft to fourth behind Suffolk rivals Bury who claimed third place with a 1-0 home win over Kingstonian. The visitors were reduced to ten men in the 33rd minute when Byron Napper was dismissed and Bury made their advantage count after 58 minutes, when Billy Clark headed home a corner.

Premier newcomers Whitehawk moved up to sixth place, three points off the pace, after trouncing Thurrock 5-1 at East Brighton Park.

The visitors, who sank to the foot of the table, actually took the lead with a Lewis Perkins header on 29 minutes but were then demolished by James Fraser, who equalised quickly and completed a hat-trick with two goals in the first five minutes of the second half. Chris Winterton saved a Perkins penalty to kill off Thurrock’s revival hopes before Sam Gargan and Jerahl Hughes completed the nap hand.

Another promoted Sussex club, Bognor, trail Hawks only on goal difference after their 3-1 success at Wingate, the day’s only away win in the division. After a goalless first half, Terry Dodd fired Rocks ahead in the 55th minute and Mu Maan added another on 72 minutes. Leon Smith pulled one back immediately and Wingate stayed in the hunt until Doug Tuck netted Bognor’s third at the death.

Two sides seeking their first victory clashed at East Thurrock, who had drawn four of their previous five games, and it is Hendon who are still waiting after their 2-0 defeat. Hakeem Araba, signed this week from Bromley, opened the scoring on 32 minutes and Sam Higgins at last netted his first goal of the new season midway through the second half, snapping up the rebound after Berkley Laurencin had saved his first attempt.

Carshalton are also winless after their 1-0 defeat at Harrow. Luke Pigden hit the post for the visitors in an untidy affair which looked certain to finish scoreless until Gary Burrell popped up to head an 87th-minute decider.

Leiston, however, are off the mark, beating Hastings 3-1 in Suffolk to record their maiden Premier success after Danny Thrower and Rhys Henry put them two up in the first 20 minutes. Sean Ray pulled one back in the 34th minute and only 15 minutes were left when Gareth Heath clinched it for the promoted club.

It was all square at Concord, where the home side took the lead on the half-hour through Harry Elmes. Richard Jolly’s shot was tipped on to the bar as Wealdstone tried to hit back, and it was Jolly who levelled matters three minutes after the interval. Lee Chappell put Stones ahead with eight minutes left but Concord bounced straight back. Tony Stokes had a shot deflected on to a post and out for a corner, which he then headed home to make it 2-2.

It was the same scoreline at Lewes, where Max Howell scored in the second minute of added time to complete a comeback from 2-0 down. Visiting Cray had gone ahead through Michael Power on 16 minutes and Leigh Bremner’s penalty stretched their lead after 34. A Joe Vines own goal four minutes before the interval revived Rooks’ hopes but it took a long time for their pressure to pay off.

Jay Curran headed Canvey into a third-minute lead at Met Police but it was not to be their day as the Police hit back to win 2-1. A free-kick somehow went in off Steve Sutherland’s backside to level matters two minutes after the break and Sutherland also got the winner more conventionally with a 67th-minute header. Harrison Chatting almost saved the islanders, hitting a post in added time.

 Mixed fortunes for twin marksmen THE Newson twins grabbed two FA Trophy goals apiece yesterday (Saturday), but with contrasting results. Ben’s double led Heybridge to a 4-1 home win over Worthing but Sam’s pair could not save Needham Market from a 4-3 home defeat at the hands of Maidston

Soham break their duck  SOHAM became the last Ryman League team to get off the mark this season, recording a 4-2 victory at Redbridge yesterday (Saturday) in the only Ryman North fixture of the day.