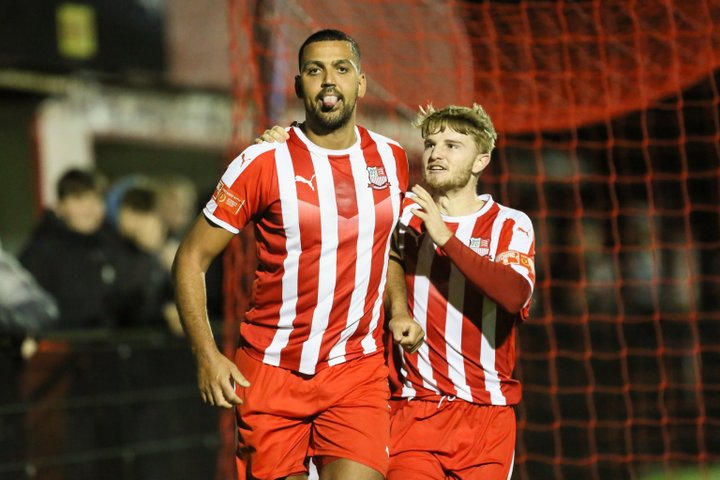 It's our Round up of a busy Tuesday night in League and Velocity Trophy.

Bishop’s Stortford moved into the top five with a point at Merstham- but after going ahead after just two minutes the Blues had to come back to claim that draw. Jake Cass got that opening goal- his fifteenth of the season- but within twenty four minutes the Moatsiders were ahead, due to a quickfire double from Korrey Henry, making it ten goals in eleven games for the Merstham number nine. The equaliser came with twenty three minutes to go, Darren Foxley getting his fourth in six matches twelve minutes after being introduced from the bench, forcing home a Jonathan Giles corner.

Horsham have now won five league matches in a row, and continued their climb up the table last night with victory over Wingate & Finchley. They scored two goals without reply last night, one in each half, Rob O’Toole opening the scoring eight minutes before the break, Lee Harding rounding things off twenty one minutes from time. The Hornets climb to fourteenth, whilst the Blues are eighteenth.

Carshalton Athletic are up to eighth after victory at Potters Bar Town. Daniel Bassett’s seventh of the campaign got the Robins off to a flyer, and when Paris Hamilton-Downes increased their lead in the twenty sixth minute it seemed victory was assured- and that was just about the case, the Scholars consolation coming right at the end- an own goal.

There was another late, late goal at Bowers and Pitsea, and it went to Cray Wanderers, who earned a point right at the death due to Anthony Cook’s screamer from distance. It would have felt rather rough for Bowers, who had been ahead for forty five minutes, Lewis Manor’s eleventh of the season coming right at the end of the first half. Bowers move up to seventeenth, whilst Wands are four points behind them in twentieth.

Our headline image comes from that match, and it comes courtesy of Nashyphoto and his new lens, which is getting lots of work!

We didn’t have any matches last night, but we did have one on Monday we thought we’d catch you up with. Hashtag United moved up to eleventh place and slowed AFC Sudbury’s promotion charge in the process, coming from behind to defeat the yellows three-two. Last Dombaxe gave Sudbury the lead midway through the first half, but two goals in five minutes before the break, both going to Carlos Flood, dampened down any overconfidence which might have been displayed by the visitors. George Keys equalised nineteen minutes from time, however, and it looked like a point each would be the outcome until Jesse Waller-Lassen decided that he had other ideas, getting a winner for the Tags right at the end.

Marlow welcomed Guernsey to Oak Tree Road, but they weren’t very welcoming at all, on the pitch at least. Three goals a half flew past Jordan Kelly in the Green Lions goal, with Kameron English getting a hat trick, Nnamdi Nwachuku getting his customary goal, whilst Adam Richards and an own goal made up the tally. Nwachuku has now scored in fourteen of the twenty matches he has played this season, sixteen goals in total. Marlow are sixth, a point outside the top five.

Marlow seem to have taken up almost the entire goal ration for the Division, as the other two matches only managed one goal between them. That goal went to Basingstoke Town, who climb to second after Nathan Smart’s second half finish earned them all three points at Staines Town, whilst South Park and Westfield were uncharacteristically toothless at Whitehall Lane, having to be content with a point apiece.

Herne Bay remain in fifth place after victory at Whitehawk. Bradley Schafer, making a Blues debut again after returning from ten minutes at Hythe Town and a little longer at Sevenoaks Town, got both of their goals. Billie Clark got a late consolation for the Hawks, who remain fourteenth.

Two points behind Bay are Hastings United, who welcomed Chichester City for a Sussex derby and took all three points due to two second half goals. Kenny Pogue got the first one, his ninth of the campaign, whilst Tom Chambers made sure of the points nineteen minutes from time.

We had five Velocity Trophy matches last night, all but one of them featuring teams from the same Division playing each other.

In the First Round, Chertsey Town continued their fine form with a five-two win over Chalfont St Peter. Magnus Abisogun got their first and fifth, with Manolis Gogonas, Mark Bitmead and Ashley Lodge providing the filling in that sandwich, whilst Josh Boorn and new arrival Jordan Junor struck back for the Saints.

Into the Second Round, and after Jayden Skerry impudently gave Burgess Hill Town the lead at top-of-the-table Ashford United, the Nuts and Bolts hit back almost immediately with two, Roberto Ratti and Josh Wisson securing victory before the half time break.

Basildon United defeated Romford as recently as the weekend, but they couldn’t do it again, as Boro ran out three-two winners last night. Amadu Kanu and Darnell Kithambo gave the visitors a two-nil lead at the break, but after the restart the Bees hit back, Declan Nche and Robbie Farrell making it two-all. The last word went to Abdulmojeed Shogbeni, who got the winner for Romford with six minutes remaining.

Haywards Heath Town were in the lead for almost an hour against Ramsgate, but ended up needing a shootout to secure victory. Nathan Cooper gave them that lead on the half hour, but Joshua Ajayi’s fourteenth of the season drew the Rams level just before the end. The shootout must have seemed almost as long as the match, the hosts eventually triumphing seven-six.

Finally, a penalty and an own goal gave Tooting & Mitcham United a two goal lead in the first half of their match with Sittingbourne, Dan Williams getting that goal. The Brickies got one back with eighteen minutes remaining. Johan Caney-Bryan scoring from the spot, but there was no equaliser forthcoming and the Terrors march on.

Grays Athletic and Barking compete in the Second Round this evening.

 Gordon's Alive! And in a flash, he's back at Tooting and Mitcham United!