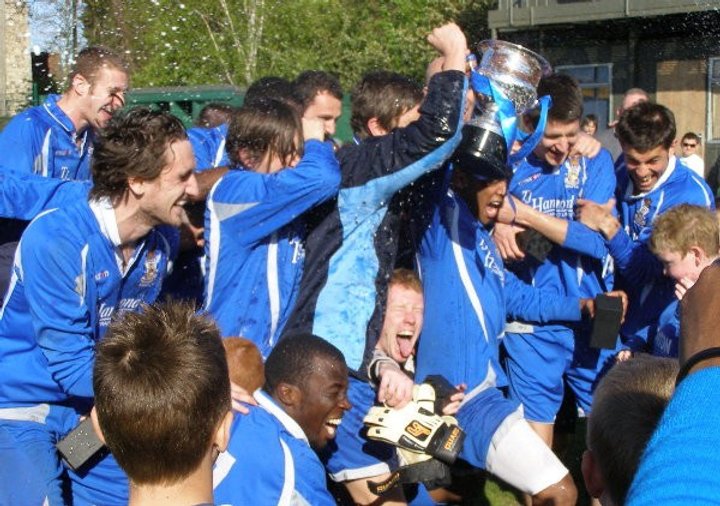 Groundhopper David gives us his favourite Isthmian match of all time, as the Rocks and the Millers fought for promotion.

On a hot summers day in April 2009 I drove the 60 miles across Essex to see the top two in Isthmian North battle it out to see who finished top of the division on the last day of the regular season. The fixture computer certainly threw up a humdinger of a final game. After 41 games each Aveley were 2nd, 2 points behind East Thurrock United- so they knew that only a win would do, whilst Thurrock knew a draw would be enough. A crowd of 800+ gathered for this game and would not be disappointed!

The 1st half was cagey but frenetic. An East Thurrock player, Kris Newby, was stretchered off due to a clash of heads, and Aveley scored through Petrit Elbi to make it 0-1 at half time. The 2nd half was set up nicely and it didn’t disappoint, you could cut the atmosphere with a knife.

East Thurrock came out like a train in the early stages of the 2nd half and Max Cornhill hit the bar with a screamer some 25 yards out. Soon afterwards they equalized in their best spell of the match, Steve Harrison getting the goal. It was end to end and soon after the equalizer East Thurrock took the lead for the first time- from a corner, which came after a point blank save from the Aveley keeper, James Marrable, who would play a central role in what followed. The Rocks got a penalty soon after they had made it 2-1, and it could have been game over- but Marrable made a great save to keep them in the game; my man of the match if I’m honest. It was a vital moment as Aveley went up the other end to grab an equalizer to make it 2-2, Richard Ketchell with the vital goal, but it wasn’t quite enough for the Milers- yet. It went from bad to worse for East Thurrock as in the melee after the equalizer the Rocks Ray Powell managed to get himself sent off. The momentum of the game was swinging Aveley's way.

The game had swung one way and the other, and the excitement of the last quarter lives long in my memory. The game was poised at 2-2 but Aveley had the man advantage, but I believe nobody in the ground could quite believe what took place in the final 10 minutes. It was Aveley’s turn to take the lead with 5 minutes to go- a scrappy goal mouth scramble ending with Elbi getting his second and the Millers third- but they all count. Next, in the dying minutes a long punt up field towards the Aveley goal was chased down by Rocks forward Kurt Smith, on as a substitute. The Millers keeper then made his only mistake of the game, missing the ball in the sun, and in a desperate attempt to recover the situation dragged down the attacker, who was clear on goal and about to win the title for his club. A clear goal scoring opportunity and therefore a clear red card for Marrable - and, of course, a penalty. With no subs available an Aveley outfield player had to go in goal, and Glen Golby faced the spot kick- and although it was well struck, the stand-in goalkeeper saved it! East Thurrock had had 2 penalties and missed them both!

Aveley saw out the remaining minutes of the game to win it- and take the title in the process. East Thurrock had to settle for 2nd and the lottery of the play-offs, which unfortunately was too much for them, as they lost in the play-off semi-finals to Concord Rangers- who finished 16 points behind them in the league.

The two sending’s off and two missed penalties were the defining moments of this game. East Thurrock were unlucky to have their usual penalty taker stretchered off in the 1st half, but the last gasp save by an outfield Aveley player topped an amazing game for me.

I am a hopper in truth and not a supporter of either team, but this game had everything and is a great favourite of mine. I have watched non-league for 30 yrs plus, and my favourite game of all time will always be Wivenhoe Town (my team) v Runcorn in the FA Trophy in front of 1922 supporters- and our last minute equalizer to take them to a replay. Out of all of the other games I’ve watched, East Thurrock United v Aveley in April 2009, a winner takes all title decider, runs it a close second.

Would you like to give us the match of your lifetime? Get in touch with Ian at townsendaround@gmail.com