Match of my lifetime: Roger Butcher, Tooting and Mitcham United 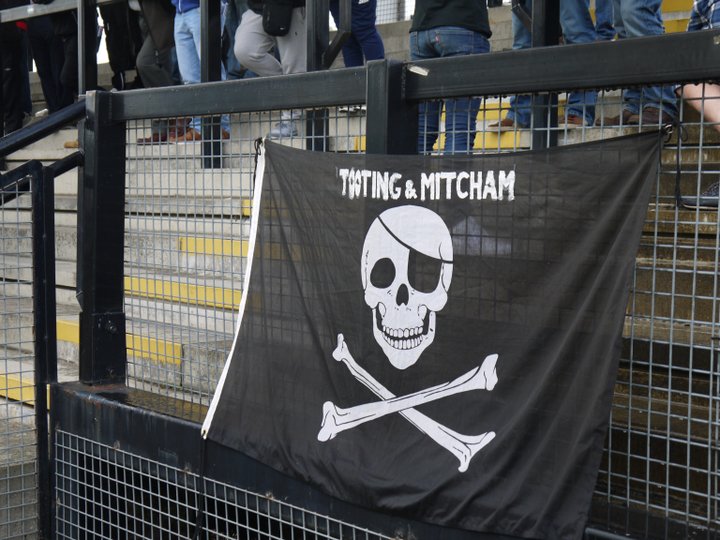 Roger tells a magnificent story. Only one goal, but along with it came a red card, a terrible injury and collection of tactical genius.

I’m going to propose Tooting v Greenwich as my Isthmian League match of the century! I doubt whether anything will ever top us beating Swindon in the FA Cup in the 70s although our brilliant 4-3 victory over Conference side, Eastbourne Borough ran it quite close. However, they were cup games, with all the one off drama that they can produce. Its not quite so easy to get the same sense of theatre in a league game unless it’s the last game of the season with promotion or relegation on the line.

But what about a mid-season game? Tooting & Mitcham v Greenwich Borough on 28th January 2017 was a game that created insane levels of tension and excitement. But first, a little bit of context. By January it was a three horse race for the Division One South title – with both Tooting & Greenwich vying with Dorking Wanderers for top spot. Tooting were actually top at the time but Greenwich were a couple of points behind but had games in hand. So this was a critical game. In the background there was also the feeling that Greenwich were the team with the big money and included within their ranks ex-Charlton and Orient pro, Bradley Pritchard. To add further spice, Greenwich had recently poached our own Billy Dunn who had already scored 20 goals for us before Christmas, but would be lining up against us on this afternoon.

The game began as expected at a high tempo with both teams having early chances as Danny Bassett hit the bar, while Tooting keeper Kyle Merson was called into action at the other end. In the 15th minute though, the game took its first twist as Quincy Rowe was dismissed for a foul on Greenwich striker Rob McDonald as he bore down on goal. 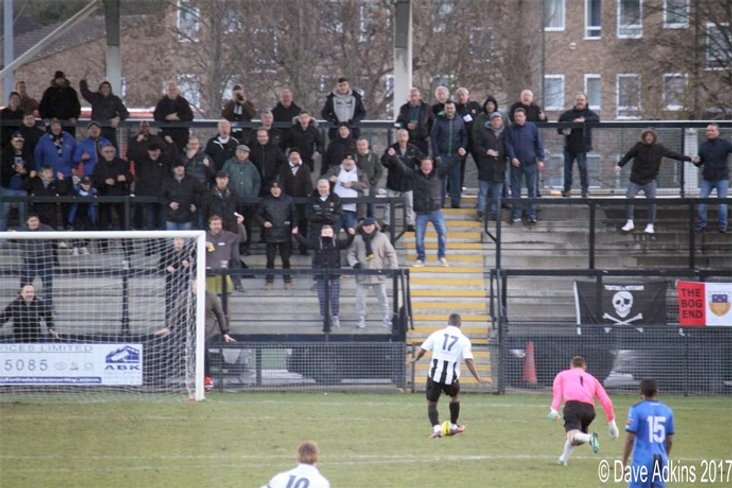 It was now that manager Frank Wilson pulled off his tactical masterstroke. Probably the conventional wisdom in this situation would be to withdraw one of your attacking players and substitute him with a defender. But Frank took off a full back and put on a midfielder! We went to 3 at the back which allowed us to keep our shape and to maintain an attacking threat at the other end. Importantly, it prevented Greenwich from laying siege to our penalty area for the next 75 minutes. Nevertheless, its fair to say Greenwich were on top for the rest of the half with Kyle Merson the busier of the 2 keepers.

Although Greenwich had a couple of early chances in the 2nd half, with Sol Patterson-Bohner clearing one off the line and Kyle Merson again called into action to save from Jake Britnell, Tooting were becoming more of a threat at the other end and there was a sense that Tooting could sneak a shock victory despite the numerical disadvantage. Again Frank Wilson showed attacking intent by bringing on two forward substitutes, Taurean Roberts and Mike Dixon. Tooting had a good penalty shout turned down and had a header from Sol Patterson-Bohner drift just wide as the Terrors started to get on top. Meanwhile, ex Tooting striker Billy Dunn was having an ineffective afternoon. Cheers Billy!

The next big twist occurred with 15 minutes remaining as Danny Bassett went down after a terrible challenge from a Greewnich player. After a lengthy period of treatment, Danny was stretchered off with what turned out to be a leg fracture, and having used all 3 subs, Tooting were left to face the last quarter of an hour with just 9 men. 2016/17 was a great season for Tooting in which the players managed to dig themselves out of a few sticky situations, but none tougher than the task that lay ahead. You could actually see the players raise the effort level to 110% as we chased and harried every ball. And critically, we kept a bit of pressure on up front when we could in the shape of Mike Dixon. And it was Mike Dixon chasing down another seemingly lost cause that turned the game on its head. A slightly overhit back pass was mis-controlled by Greenwich keeper Craig Holloway allowed Dixon to sneak in and tap the ball around the keeper and to run the ball into the empty net. The crowd erupted. The team erupted. The bench erupted. I can’t remember seeing such exhilaration in a goal celebration.

That left 11 minutes plus an inordinate amount of stoppage time to survive. And for the first time in the match, we were forced to sit back and defend. But once again, you could see the increased effort as we re-doubled our work rate. The players were determined not to let go of this miraculous victory. We were pinned back, but Greenwich weren’t allowed any time on the ball and were unable to turn their 2 man advantage into any clear chances. The final whistle arrived and there were riotous scenes on the terraces. Less so on the pitch as the players must have been so drained after such a fantastic effort.

Long-time supporters were agreed that we had just witnessed on of the best matches at Tooting over the last 50 years. And it is a game that is still fresh in my memory, and I’m happy to recount the story to anyone who is prepared to listen…

Would you like to write about the match of your lifetime? Email Ian on townsendaround@gmail.com and we'll get your tale to the Isthmian audience.

 An electronic programme library Even if you hate them, you might want something to read until the football is back!

Match of my lifetime: Mark Wells, Horsham  Mark takes us back to a Hornets famous 2007 FA Cup match- but not THAT one!