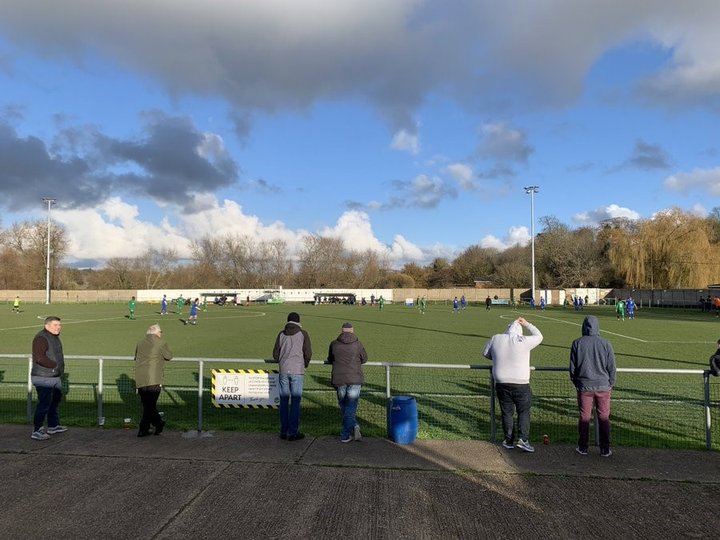 It’s nice to get some actual football to write about, however fleeting. Here’s a round up of Saturday’s action.

Cray Valley PM hosted Corinthian-Casuals in the London County Cup First Round, and the one hundred and thirty three fans who turned up to watch were given a treat as the sides scored seven goals between them. The Millers struck first, Matthew A-Warren opening the scoring after fourteen minutes, but Casuals turned the tables when Keiron Cadogan- from the spot- and Jerson Dos Santos scored in the thirty first and forty first minutes. Sam Hasler made sure we were all square by the break, but five minutes after it Cadogan got his second of the game to restore the visitors lead- and that’s how things remained until seven minutes from the end.

With time running out Ade Yusuff drew the hosts level, and then in the very last minute Hassan Ibrahiym snatched a winner, delighting the home fans and sending his side through to round two.

We also had a collection of friendly matches. Ashford Town defeated Banstead two-one with goals from a trialist and Bradley Sweeney; whilst Aveley had to quickly find some opposition after East Thurrock United had to pull out of their match at Parkside, and got National League South Braintree Town in as replacements. The Millers fell to a two-one defeat, we don’t know who got their goal.

Barking entertained Fisher, and ran out comfortable three-nil winners, with goals from Isaac Westendorf and a pair of Juniors, Dadson and Luke. We don’t know the result of the match between Bedfont Sports and Combined Counties side FC Deportivo Galicia.

Bracknell Town defeated Didcot Town by four goals to one- scorers as yet unknown; whilst Brightlingsea Regent defeated Witham Town three-one with goals from Jake Clowsley, Khris Oti and James Crisell. We don’t know who got the visitors late consolation.

Cheshunt and Waltham Abbey played out a one-one draw, but again we’ve no idea who scored.

Concord Rangers took on Coggeshall Town (at Bowers and Pitsea, behind closed doors), and the National League South side won four-one. Again, no scorer details are available.

Cray Wanderers and Basildon United shared five goals at Flamingo Park, the visitors getting three of them. Murrell-Williamson and Parker scored for the hosts, we don’t have the Bees scorers.

Haringey Borough and Hendon met at Coles Park, and warmed up the faithful with eight goals, Borough getting five of them. Yes, you’re right, we don’t know who scored them!

Hertford Town defeated Oxhey Jets four-one, and our headline image shows fans at that game and is courtesy of the club Twitter feed, whilst Heybridge Swifts and White Ensign played out a seven goal thriller, the visitors getting four of them. Manny Osei and two from Andy Fennell had earlier given the hosts a three-nil lead.

Hornchurch defeated Grays Athletic three-nil, all of the goals coming in the first half and two of them from the spot. Sam Higgins got the first spot kick, Liam Nash the second, and Nash added a third from open play in the thirty eighth minute- and that was that.

Callum Bennett and Sam Nunn got the goals as Felixstowe and Walton United won at Leiston, whilst Kingstonian fell to a two-one defeat at Metropolitan Police, scorer unknown.

Pagham defeated Worthing one-nil, whilst elsewhere on the Sussex coast Peacehaven & Telscombe also got one, but Whitehawk got five- Rodrigues (2), Emberson, Sobowale and Muggeridge scoring for the Hawks.

If we’ve missed a match, please let us know! We’ve relied very much on social media for this round up, and that’s not always the best source of information.

Jacquart returns to Merstham  Midfielder is a Moatsider once more