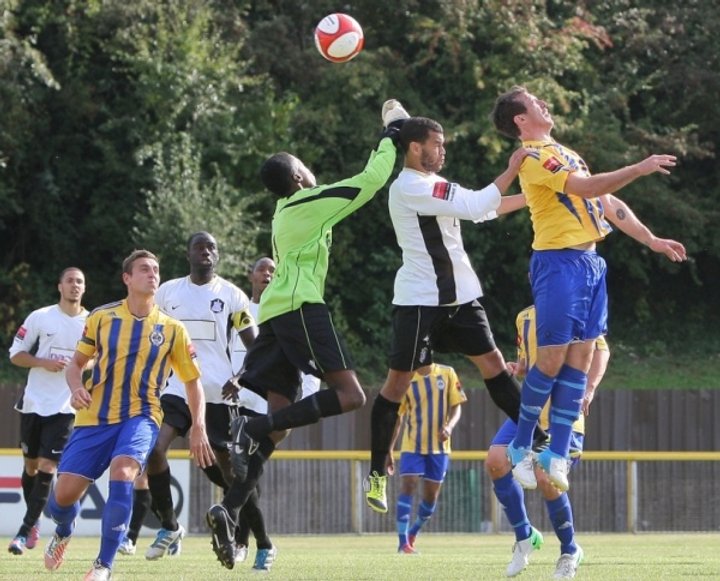 THE Newson twins grabbed two FA Trophy goals apiece yesterday (Saturday), but with contrasting results. Ben’s double led Heybridge to a 4-1 home win over Worthing but Sam’s pair could not save Needham Market from a 4-3 home defeat at the hands of Maidston

Solomon Ofori, yet to score a league goal this season, netted his fifth in cup competition to give Swifts a 24th-minute lead which Ben Newson doubled four minutes later.

Jamie Brotherton replied for Worthing early in the second half but Newson struck again on 69 minutes and Michael Cheek wrapped it up with a late penalty.

Needham were always playing catch-up after Paul Booth gave Stones the lead midway through the first half. Tim Olorunda added another in the 43rd minute. There was still time for two more goals before the interval, with Sam Newson’s effort being answered by a Booth penalty.

The hectic action continued with three more goals in the first six minutes of the second half: Booth made it 4-1 with his hat-trick goal, and his 10th of the season, before Sam Clarke and Newson replied – and somehow that was the end of the scoring.

That made a win apiece for the two regional Ryman divisions on a day which could have answered the often-asked question of which is the stronger. There were 11 North v South clashes in all.

Perhaps the biggest surprise came at Ship Lane, where Romford came from behind to beat Dulwich 3-1. Vernon Francis put the visitors ahead after 10 minutes and Romford’s Nick Reynolds missed a penalty shortly afterwards. Reynolds also headed against the bar (pictured courtesy of Gavin Ellis/TGS Photo)

Two goals in six minutes either side of half-time, a long-range lob by Adam Salmon and a Reynolds header, turned things round and Reece Hewitt netted Boro’s third on the hour.

Witham were in front after two minutes at South leaders Crawley Down thanks to a Billy Hunt pnalty. The Anvils drew level through Luke Blewden just before the break and clinched a 2-1 win with a goal from Baff Addae 20 minutes from time.

There was a much more startling change of fortunes at Walton & Hersham, where Maldon seemed to be cruising to victory with a goal in each half, Dave Wareham and Chris Bryan the marksmen. Jerome Maledon pulled one back in the 78th minute and then two free-kicks from Adiosun Moraes were headed home by Phil Williams, in the 88th minute, and Ashley Quashie, in the second minute of added time, as Swans snatched a dramatic 3-2 victory.

It was all square at Thamesmead, where an unmarked Lloyd Cotton headed Burgess Hill into a 12th-minute lead and Ashley Probets replied with a penalty 12 minutes from the end.

An 83rd-minute goal from substitute Adrian Stone earned Faversham a 1-0 home victory over Sudbury while, at nearby Herne Bay, Chatham were 2-0 victors with a goal right on half-time by Rodrigue Ndiane and another by Jack Pallen in the 70th minute.

One goal from James Peagram five minutes before the interval was enough for Waltham Abbey at Chipstead, and Potters Bar came out on top 2-1 at Corinthian-Casuals where all the goals came in the first half-hour. Josh Urquhart’s penalty for the visitors was answered by Danny Dudley before Danny Johnson netted what proved to be the decider.

The final match in the North-South series was at Hythe, where the hosts thumped Ware 4-0. Brendon Cass set up the 41st-minute opener for Dave Cook and scored himself three minutes after the interval. Nick Reeves got the third on the hour and Cass struck again just before the end.

So which division is better? The question remains unanswered, the final outcome being North 5 South 5 with one match drawn.

Waltham Forest followed up last week’s shock 5-2 FA Cup victory at Hemel Hempstead with a 3-1 success at North rivals Cheshunt. Luke Stanley gave Forest the lead four minutes before the interval and Adrian Clifton added two in the game’s third quarter, separated by Leon Archer’s strike for the home side.

The other all-North tie, at Brentwood, ended scoreless. Harlow had a chance from the penalty spot after 16 minutes but Piers Wixon’s kick was saved by Elliott Justham. Brentwood’s Alex Read was denied by a post in the closing stages.

Sittingbourne, who had scored only three times all season, found their touch as they thrashed visiting Horsham 4-0. A Nick Davis header after seven minutes gave them some confidence and, after Horsham’s Wayne Clark hit a post, Hicham Akhazzan and Joe Nwoko netted in the space of four minutes shortly before the half-hour mark. Akhazzan nabbed his second two minutes from time.

As in the North, the second all-South tie finished 0-0 and Folkestone will have to travel to Merstham for a replay on Tuesday. The Kent club could have made sure at the first attempt but Stuart King failed to convert several chances, hitting a post with his best effort.

That left seven ties in which Southern League clubs provided the opposition and they produced plenty of goals. Ryman clubs were outscored 17-15 but chalked up four wins.

Grays were quick off the mark: Joe Sweeney gave them the lead in their home game against Aylesbury after just 16 seconds. When the visitors, 21st in their division, had Lee Grace sent off in the 12th minute it should have been easy for Grays but Brian Haule equalised two minutes later. Joao Carlos put Grays 2-1 up on 26 minutes and that was how it finished.

Tooting, bottom of Ryman South, came from behind to win 3-1 at North Greenford, who had the chances to be more than 1-0 ahead at half-time. They were punished after the break as Kai Bichard equalised on 52 minutes and Lee Hall put the Terrors ahead from the spot five minutes later. Joseph Acquah added the insurance goal with 12 minutes left.

Leatherhead stormed to a 4-0 victory at Northwood, where Chris Boulter’s sixth-minute header provided a half-time lead. The tie was settled in the first seven minutes of the second half as Greg Andrews and Mark Simmons found the target, leaving Elliott Thompson to complete the scoring in the 80th minute.

Wroxham completed the list of Ryman successes with a 3-1 home win over AFC Hayes (a Ryman club a few years ago when they were known as Brook House). Hayes took the lead after 34 minutes but an own goal squared it two minutes later and Matt Daniels put the Yachtsmen ahead in added time at the end of the half. That was a penalty after a foul on Matt Blake, who added the third himself in the 58th minute.

The beaten Ryman teams went down heavily, with Tilbury, second in the North table, crashing 4-1 at Chertsey who are 20th in their league. Two goals in the first 11 minutes had Dockers on the ropes and they were four down shortly after the interval. Danny Francis gave them a little late consolation with his ninth goal of the season.

Aveley equalised through Billy Holland in the 40th minute at Royston but were stunned by a burst of three goals in five minutes early in the second half and went down 5-1.

Walton Casuals lost by the same margin at home to Ashford (Middx), who led 3-0 by the time Casuals had Hassan Nyang sent off in the 40th minute. They pulled a goal back with a Liam Holden penalty three minutes later but to no avail.

Margate take over at the top  MARGATE are the new Ryman Premier leaders after a comfortable 2-0 home victory over Enfield Town yesterday (Saturday).