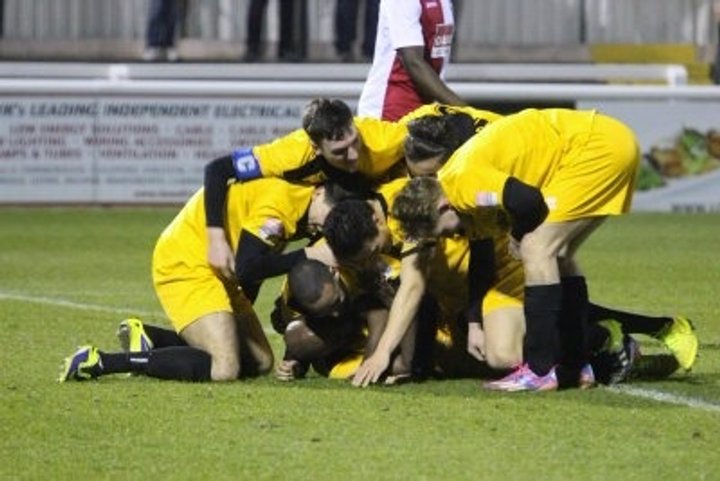 Merstham manager Hayden Bird and his Ryman Premier side are looking forward to going one better than last season when they meet Godalming Town in the final of the Surrey Senior Cup.

After losing 2-0 last season to the Metropolitan Police, pictured below, the Moatsiders knocked out National League favourites Woking with a 3-1 semi-final victory at the home of the Cards on Tuesday night.

Goals from Fabio Saraiva, Charlie Penny and Calum Willock booked Merstham's berth in the final against the Combined Counties outfit, pencilled in to take place at Woking's Laithwaite Community Stadium on Wednesday 4 May.

Saraiva put the Moatsiders ahead before the break before Penny and then Wilcock ended any hopes the 12 time winners still harboured of reaching their 28th county cup final in front of their fans after Garry Hill's side pulled one back. Ironically after the events of last season and with the coming weekend off, Bird's side start their preparations to win the competition for a second time next Tuesday night when they host the Met Police at Moatside in Ryman Premier action. Merstham beat Whyteleafe 3-2 at Imber Court in 2008 to record their first triumph.

 Log on for Wednesday's live scores! Follow Wednesday night's action in the Ryman Premier and Ryman South on the live scores service.