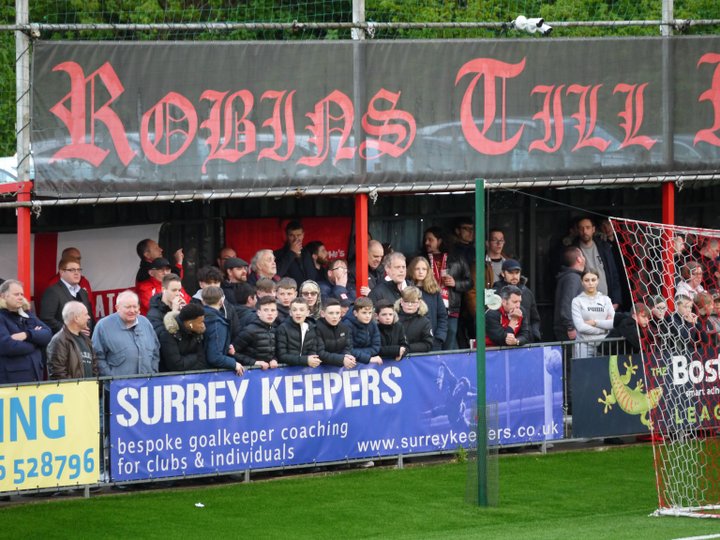 Carshalton Athletic and Merstham played out a Surrey derby for more than bragging rights- the winners marching on to a Playoff Final on Bank Holiday Monday. The Moatsiders left the Robins nest with the prize.

It was an hour before kick off at Colston Avenue, and Carshalton Athletic media guru James Barrett-Sterling was repeating a well-prepared piece to camera at the front of the grandstand, whilst trying to keep his expensive electronics sheltered from the persistent rain. He spoke about positivity, balance and focus, and then made the point that, whatever happened, the club should be justifiably proud of their efforts this season.

Behind him, walking the pitch and seemingly oblivious to the weather, Merstham manager Hayden Bird seemed deep in thought. Perhaps he was preparing his message to his players, and also about to speak of positivity, balance and focus. What was certain was that the words being delivered by James about pride could apply just as well to the Moatsiders. For Carshalton to finish their first season after promotion in second place, and play such scintillating football for much of the campaign, was rather magnificent. For Merstham, after all a village club, to finish in fifth place and qualify for the playoffs- the best finish in their history- was also unprecedented, and their football had also been a joy to watch for the majority of the season. Sometimes pride comes before a fall, and one of our teams tonight would indeed have to fall, but both sets of players would have cause to look back on their achievements this season with delight, whatever happened over the next ninety minutes.

As James finished his recording, the sun came out, and a rainbow appeared by the far corner flag, suggesting that the pot of gold may be buried at the end of the massive covered terrace that stretches one side of the ground- if you’ve never been here, perhaps consider it like a Non League Signal Iduna Park. Apart from the fact that the terrace filled by Borussia Dortmund fans is behind the goal, you’d struggle to tell the difference. 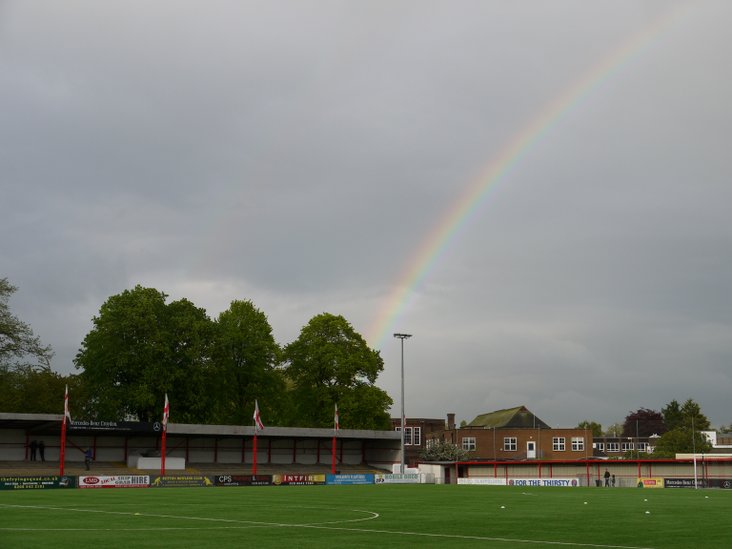 Looking for a pot of gold...

Well, apart from the fact that Carshalton have a ‘Red Wall’ rather than a yellow one, obviously.

Tonight’s victors would, for this season only, have to win three matches to join our champions Dorking Wanderers in National League South, rather than the usual two. The winners tonight would take on Haringey Borough or Tonbridge Angels, and then the winners of that match would face either Metropolitan Police or Poole Town in a Super Playoff Final on Saturday 11th May, Met and the Dolphins having already progressed to the Evo-Stik South Premier Final.

Talking to supporters of both sides before kick off, there was the expected mixture of confidence and trepidation- but perhaps the largest portion of the latter was with the home fans. It wasn’t difficult to understand why. Twice this season they had taken on the Moatsiders, and they were yet to pick up a point, losing 2-0 away and 2-1 at home, on the most recent occasion despite playing against ten men for more than an hour. Third time lucky? It was too difficult to call. Even the neutrals we encountered tonight were sitting so firmly on the fence they were in danger of contracting piles.

Following the toss the teams- and their fans- changed ends, and then the Robins, with Tommy Bradford, got us underway. 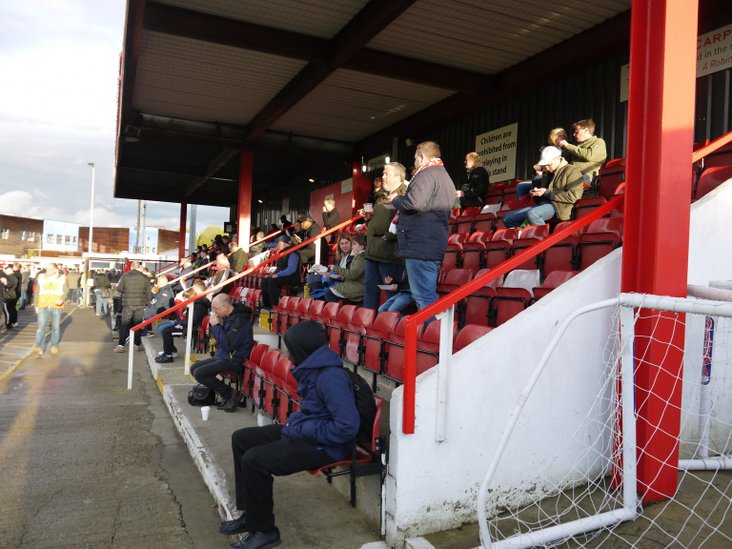 Half an hour to go

Two minutes later, Merstham were ahead.

It came as rather a surprise. The Robins had gone straight on the attack, and when Merstham cleared the ball Jacob Mendy, in the left back position, seemed to have plenty of time to clear. Instead he attempted a back pass, scuffed it, and Walter Figueira nipped in and steered the ball expertly across Billy Bishop into the net.

Last Saturday at Worthing, the Moatsiders got three goals in the first six minutes. Athletic would need to ensure they weren’t similarly swept away. In player-manager Peter Adeniyi they had just the man to spread calm throughout the side, and the yellow tide was halted, for now. Merstham kept up the pressure, however, and for most of the next fifteen minutes the Robins, apart from one foray, struggled to get out of their own half- although Bishop wasn’t unduly troubled, the one shot that did come his way, from Kenny Beaney, ending up in the crowd behind his goal.

And then, from nothing, Carshalton were level. Bobby Price got to the byline, crossed to the near post, and there was Adeniyi to poke the ball home. A minute later more home pressure saw Amadou Tangara make a save from Bradford. The pendulum seemed to have swung back in favour of the home side. 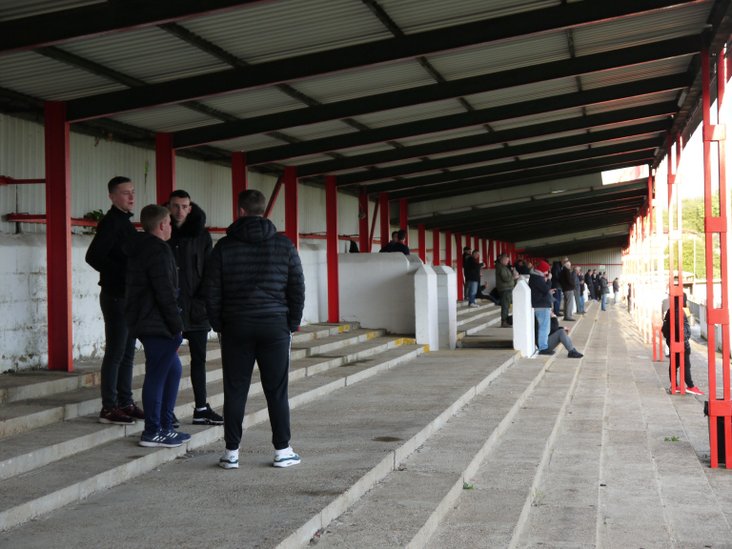 The 'Red Wall' in its early stages

They almost made that pressure count on twenty five minutes. Bradford found himself in space just outside the box, to the left, and saw Harry Ottaway coming in at the far post. His cross was aimed at Ottaway, but curled ahead of the Robins striker and crashed back off the upright, keeper beaten. Price, on the penalty spot, was first to the rebound but found the feet of a diving Tangara. Merstham scrambled the ball clear, and had a spell of pressure of their own, which ended with Michael Abnett firing a shot through a crowd of bodies which Bishop got down well to save. Abnett’s next action was to be on the receiving end of a foul from Omar Koroma on halfway, which saw the Robins forward become the first name into the referee’s notebook.

Gus Sow was the next player to see a yellow card. Following a spell of Carshalton pressure which ended with a Koroma free kick into the wall, Bradford got to a bouncing ball on the left and found Sow’s foot as high as his head. Defender Daniel Pappoe stood over the ball, and we assumed it was a feint as he’d done the same prior to the previous dead ball, but on this occasion Pappoe struck a shot which would have ended up in the car park had it not been for a very tall fence behind the goal. It must have seemed a good idea on the training field. That was the last notable action of the half.

It perhaps wasn’t a surprise that the second half didn’t start with the intensity we’d seen in the first. Both sides seemed to have decided on a little more caution, and it took a whole five minutes for the first shot, an effort from Figueira which wasn’t even slightly comparable to his attempt forty eight minutes earlier, the ball walloping against the ‘Big and Tall Menswear’ sign situated above the heads of the away fans. A foul by Price on Beaney two minutes later gave the visitors a far clearer sight of goal, and the player fouled got up to take it, striking the advertising board around six feet to the left of the last one. Price atoned for his error by delivering a cross to the far post three minutes later that needed only a touch to deliver a certain goal, but neither of the home players closing in could get that touch and a goal kick was the result.

The one thousand, one hundred and fifty one in attendance weren’t being given as much excitement as they’d got before the break. The hour mark came and went without a single strike on target, and a number of niggly fouls broke up the flow of the match. A conversation to the left of the main stand turned to what was happening at Coles Park, where Haringey Borough had just scored. Unfortunately for the side in yellow at that match, Tonbridge Angels already had two. This was interrupted as the ball was laid back to Price on the edge of the Merstham box, but the shot was so far wide and high that people waiting on the platform at Carshalton Railway Station would have been well advised to duck. The next shot, from Ottaway in the seventy fifth minute, was closer to the target, but still a good five yards over the bar. The Robins were having most of the possession, but there was little danger at either end. Thoughts began to turn towards extra time- and then Merstham decided to change all of that. 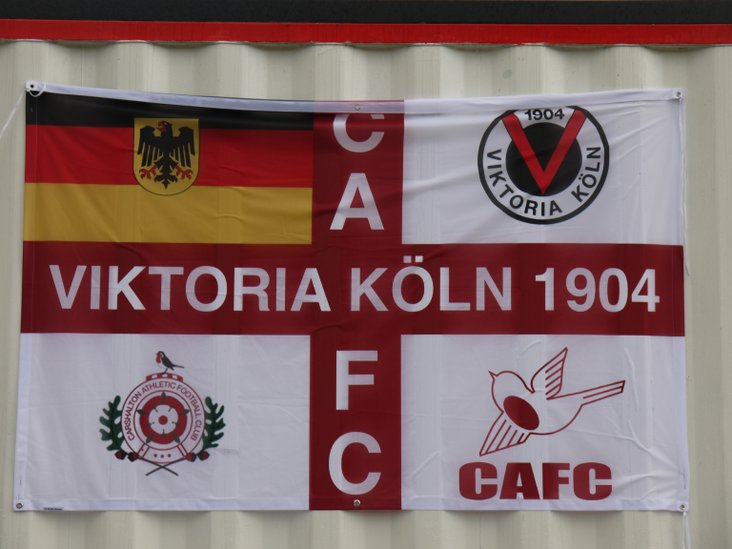 In the 79th minute Kershaney Samuels got the ball at the right-hand side of the Carshalton box. He drove in a shot, and it seemed to take a deflection. Bishop couldn’t get to it, and it looped into the back of the Robins net. The Moatsiders fans behind the goal celebrated as if they’d won the lottery.

Carshalton made a change. A defender, Luke Read, went off, and an attacker, Christie Pattisson, came on. He had eight minutes to make a difference, but his cause- or rather that of his side- was soon undermined by a red card. Somewhere behind a pillar Omar Koroma received his marching orders. It was difficult to understand what had happened- certainly nobody in the press box could work it out- but those thoughts were banished a moment later as Bradford found himself free in the box, walloped the ball- and it flew inches wide of the near post. Could the ten men grab an equaliser? Koroma watched on from the tunnel, caged, his head in his hands. Four added minutes were announced, and for the first time Carshalton went direct, hoisting long balls forward in the hope of creating an error in the Merstham defence.

We moved into the last minute of added time. Would there be a chance? There was. Korboa, on the edge of the box, poked a shot goalward, but it went past the far post, Adeniyi just failing to get a touch. And then it was over, and the stadium announcer was wishing the Moatsiders the best of luck for Monday’s match at…Tonbridge Angels. Steve McKimm’s side had made it two away wins out of two.

Both sides were saluted from the field by their fans. Both deserved their accolades. But it was Merstham who marched a step closer to glory. 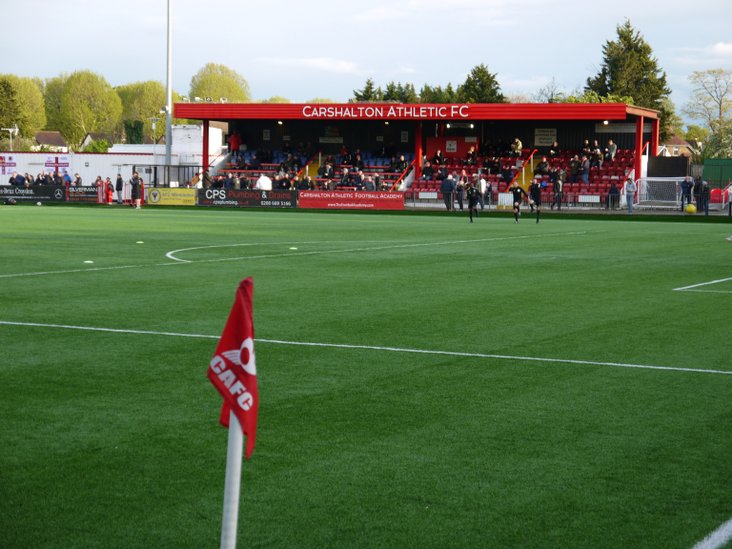 The main stand at Colston Avenue 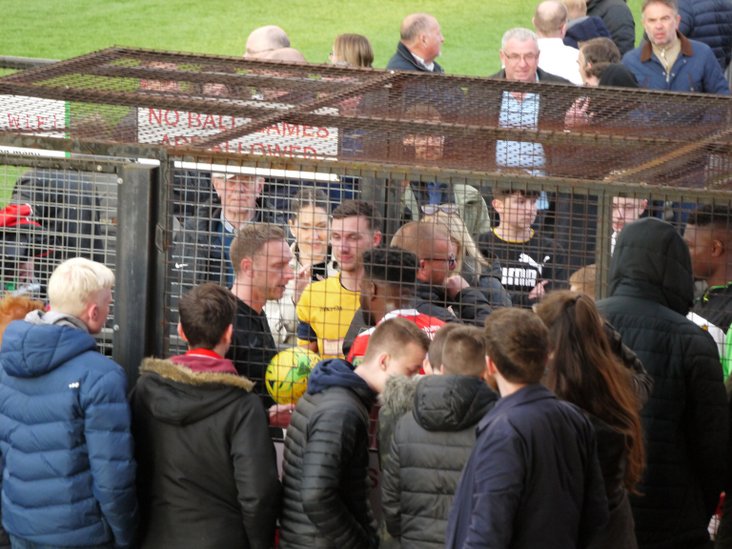 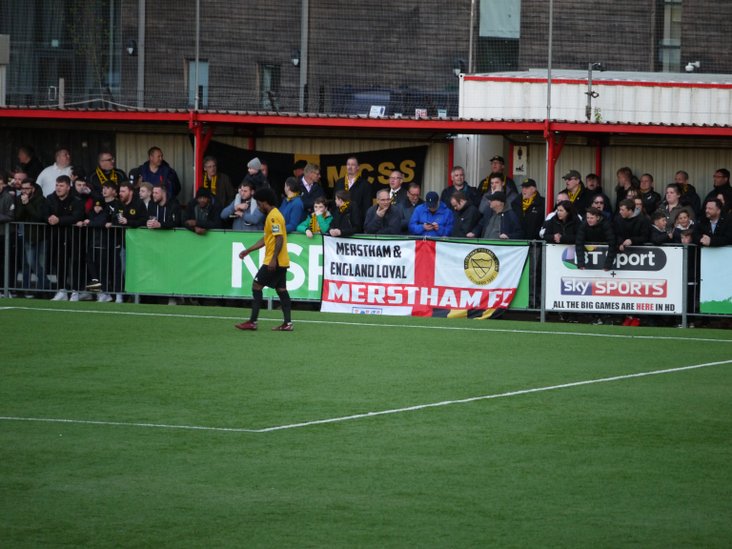 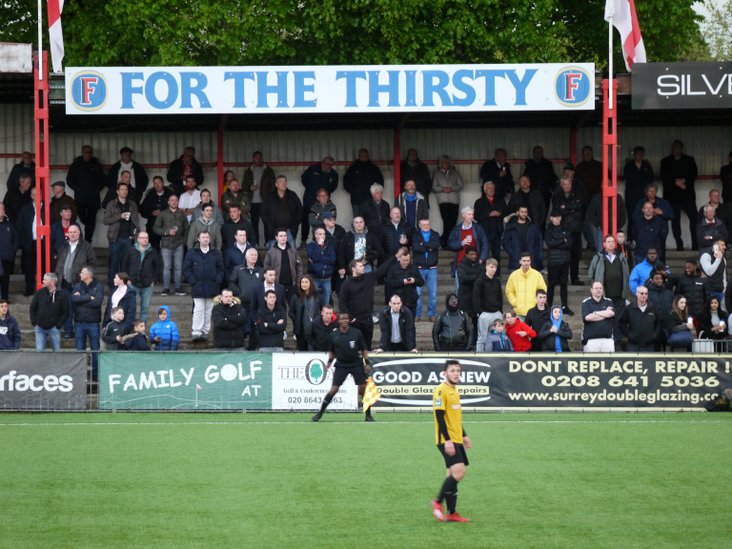  Uxbridge announce managerial change- less than a week before a Cup Final! Honeycroft will have a new man in the dugout- for the first time in over a decade

Nine-man Swifts take the prize  We had two goals, three red cards, and enough incident to keep the fans talking for months. Heybridge Swifts defeated Aveley to reach the North Division Playoff Final- and here's how they did it.