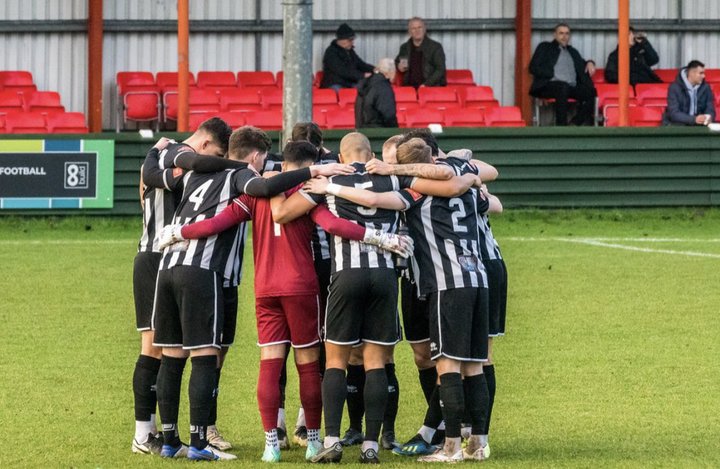 We also had wins for Chertsey Town, Westfield and South Park. It’s our Pitching In Isthmian South Central round up.

It has almost become Bracknell Town and who else for promotion this season, with the Robins fourteen points clear at the top at the start of the day- and with the same advantage at the end of it. Town welcomed another Town, Thatcham, to Bottom Meadow having won their previous fourteen league matches, and did what they seem to do almost nonchalantly of late- score- very early on, Dan Bayliss putting them ahead after just five minutes. The Kingfishers didn’t lie down, but they did concede another right at the end, Seb Bowerman scoring from the spot to make it two. That, rather incredibly, means that Seb has scored sixteen goals in his last eleven matches- and reaches twenty for the season.

FIFTEEN wins in a row- fourteen points ahead- fourteen games to go. It’s all coming up Bracknell.

Chertsey Town were leading the chase behind the Robins at start of play. The Curfews were on the road to Chalfont St Peter, the Saints buoyed by last weekend’s win over Binfield, and the hosts held out for eighty minutes, when Jake Baxter- it’s always Jake Baxter- finally broke the deadlock for Town to ensure that Bracknell couldn’t get even further ahead. That was the only goal, and it was Baxter’s seventeenth of the campaign.

Uxbridge had previously lost only to Bracknell this season- twice- and defeated Chertsey last time out. The Red Army were on the road to another form side, Hanwell Town (pictured courtesy of the club), the Geordies having won their last four games and scored nineteen goals in the process- and that goal tally moved on to twenty in five when Harry Rush put them ahead midway through the first half. It was two-nil eight minutes after the restart, Jack Hutchinson finding the back of the Uxbridge net, and Hutchinson’s second of the match made quite sure of the points a minute from time and saw the Geordies climb to fourth- a point behind their visitors.

Marlow, having conceded fewer goals than anyone in the top eight levels of English football at the start of play, were on the road to Northwood. Woods have been much better on the road than at home this season, but they did what few clubs have managed and broke through the Marlow defence on fifty three minutes, Josh Helmore opening the scoring. That was the only goal of the game, and Marlow now have to share their defensive plaudits with guess who- Bracknell Town. Jordan Brown saw a late red for the visitors.

South Park, with new signings (more about those tomorrow), welcomed Sutton Common Rovers to Whitehall Lane- but it was a familiar name that opened the scoring, Melford ‘man mountain’ Simpson with the goal on nine minutes. The equaliser came just before the break, an own goal damaging Sparks, but then Rovers damaged themselves, with a red card for Ryan Healy and the hosts took advantage in the very last minute, Danny Alderton snatching the points for the hosts.

Ashford Town welcomed Westfield, and the Tangerines were a little too welcoming when Kai Hamilton-Olise put the visitors ahead midway through the first half. The hosts drew level five minutes after the break, George Spiers delighting the Tangerine faithful, and they were even more delighted when Aaron McLeish-White put their side ahead just before the hour.

They didn’t stay delighted. Sam Evans equalised for Westfield twelve minutes from time, Luke Elliott put them ahead five minutes later, and IK Hill made it four-two with four minutes left to claim all three points for the Woking side.

Chipstead and Tooting & Mitcham United couldn’t manage a goal between them.

Goals, red cards and drama galore!  We had an incredible nine goal thriller at Cray, five for the Towners, four for the Blues- and Worthing’s lead is cut. Here’s our Pitching In Isthmian Premier round up.