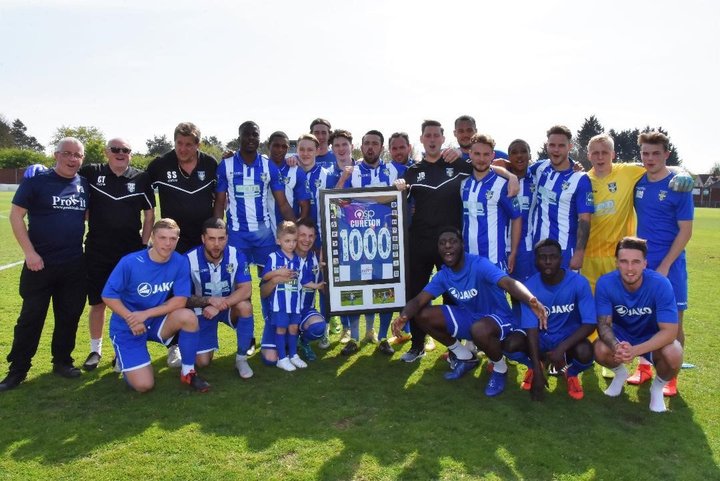 Bishop’s Stortford fan Steven has picked a selection of blue legends, and a rather attacking formation.

We haven’t had too many players on loan from Tottenham, but Jordan did play for Stortford during the 2011/12 season. Whilst still young and developing it was clear he was a high-quality stopper and he has gone on to play for several football league clubs.

Club captain for several seasons during his time at Stortford Johnny was one of the most committed and dependable full backs I have seen. Whilst not a rampaging, overlapping full back he was something of a long throw specialist and created numerous goal scoring opportunities by launching the ball into the box.

Our current centre half and club captain Ryan and reads the game really well. Dependable and quietly effective he is strong in the air and on the deck.

Callum was a local lad who went to the same primary school as my son. He was on West Ham’s books for several years but managed to get sent off at half time in his only senior appearance and unsurprisingly never featured for them again. Bizarrely I believe he is now a coach as Juventus’ satellite academy in Boston, USA which is quite some journey from Stortford.

A combative midfielder you could never accuse Glenn of lacking desire. Never gave the opposition any time on the ball. Rose to gain England C team honours.

Club captain during our run to the First Round of the FA Cup in 2013, Reece sported an impressive range of tattoos and was never bullied in a game, always fighting toe-to-toe (sometimes literally!) with the opposition.

Fans always have a soft spot for players who are home grown and who have come through the club’s youth system. “Wholly committed” is a good way to describe the way Jack plays. He is basically a walking yellow card and I always think it would be more efficient and save a lot of time if the referee just booked him when the teams line up in the tunnel before the game. Always gives his all for the club.

You need to earn the right to play in a physical league such as the Isthmian, and my other three midfielders certainly wouldn’t be intimidated by any opposition, but I felt I needed a bit more creativity in the midfield which is why I selected “Churchy”. A ball playing midfielder who wore the Captain’s armband for a number of seasons’ at Stortford he knew how to pick a pass to unlock the defence and would always chip in with a few useful goals each year.

Jamie played and for a time also managed Stortford during his time at the club from 2018-20 and is a club legend. A veteran player whose true age is a State secret, he will certainly get his Covid vaccine before any of his teammates. His career has spanned the top nine tiers of the football pyramid and he is one of only 29 players in the world to have made over 1,000 competitive appearances. His 1,000th game was one of my favourite Stortford matches when, in front of the TV cameras, he scored two fantastic goals to help us to a 3-2 win over Brightlingsea Regent. A true football gentleman.

Dwight joined us on loan from Dagenham & Redbridge for the 2011/12 season. A natural goal scorer he was far too quick and talented for the defenders in the National League North (where Stortford had bizarrely been exiled to that season) and he proceeded to score 29 goals in 42 games. He was clearly destined for a higher level and I was delighted to see him make it all the way to the Premiership with Crystal Palace and Newcastle. He has never forgotten his roots and has occasionally been spotted back at Stortford watching the odd game.

Steve graced the turf at Stortford for just under two seasons from 2004-06. He was instrumental in helping Stortford reach the FA Trophy semi-final in 2004/05 and finished as the top goalscorer in the competition. He was a robust striker and a physical handful for defenders. He always gave 100% and was a fan’s favourite as a result. Another Stortford player who progressed all the way to the Premiership with Norwich.