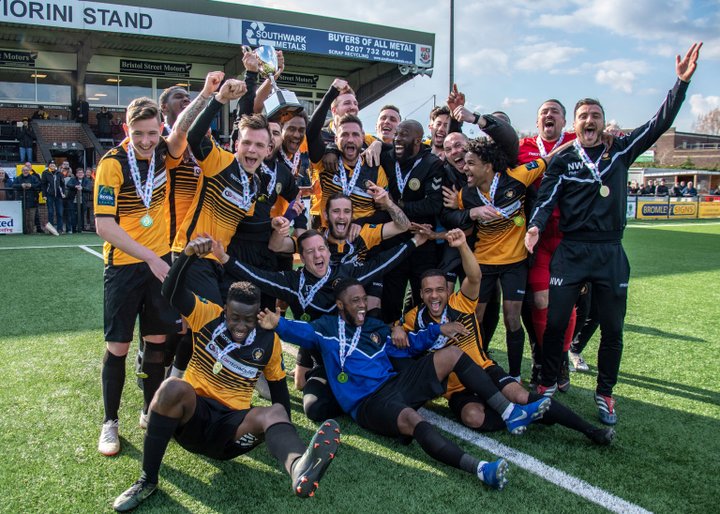 We’ve been asking supporters to pick the best eleven players they’ve seen play for their club. On this occasion we’re taking a trip to Hayes Lane courtesy of Mark, who brings us his very favourite Wands

For the latest in our series where supporters pick the best players they've seen play for their club, we visit those Wanderers of Cray- who will hopefully have a home of their own shortly, so that they can be Wanderers who don't have to wander. Mark Hunt is our guide.

In effect a striker by trade but converted to a full back due to absence in that area and uses his great pace and an eye for a goal and a scorer of tremendous goals.

Exceptional centre-half came to Cray in January 2016 and has been a great success and part of a great defence at Cray Wanderers. Scores the occasional vital goal and now the man in the mask is a real leader of men.

Going back to my early days watching Cray, Mark was the Wands skipper and an inspirational figure during the early days in the Isthmian League and Premier. Scored plenty of goals and showed great quickness and a threat from set pieces.

Grant Basey
-
Sometimes you see players for the first time and instinctively know he was an ex- pro and Grant Basey was such a player. Strong as an ox and incredibly quick, Grant had a knack of scoring goals from free-kicks early in his Cray career and although only played for a season and a half before retirement it was a real pleasure to watch him play.

Leigh came to Cray in 2005 and over four spells at the club scored 138 goals putting him third in the all time Cray goalscorers list. Always gave 110%, scored great goals and looked after himself exceptionally well. A Cray Wanderers legend.

Ditto above for Grant Basey. You knew first time you see him play he has been at the top levels of the game. Rarely gives the ball away, Bradley usually dominates the midfield and incredibly disciplined.

Part of the team which miraculously stayed up in the Isthmian North in 2014-15, Chris was a midfielder who had been out of the game for a little while but his dynamic displays included 12 goals to help stave off the drop to the Kent League. Similarities with Paul Scholes in looks and ability.

Came to the club in 2015 and an immensely popular player who perhaps is not a great goalscorer but makes up for it with assists galore. To me one of the best players in the whole of the non-league game

Superb striker came to Cray in November 2018 and helped Cray win the Isthmian South-East in his first half season and has now 58 goals for the Wands and was top scorer in the Isthmian Premier last season. Scores all types of goals, a great centre-forward who helps set things up for others and on course to be a Cray Wanderers legend.

Another remarkable striker with 108 Wands goals to his name in three different stints with the club and incredibly powerful similar to Joe Taylor. Another player who can score all types of goals and deadly in one on ones and an intelligent player.

 My First XI: Carshalton Athletic, Alan Johnstone We’ve been asking supporters to pick the best eleven players they’ve seen play for their club. We’re off to Colston Avenue, where Alan brings us a flock of Robins.