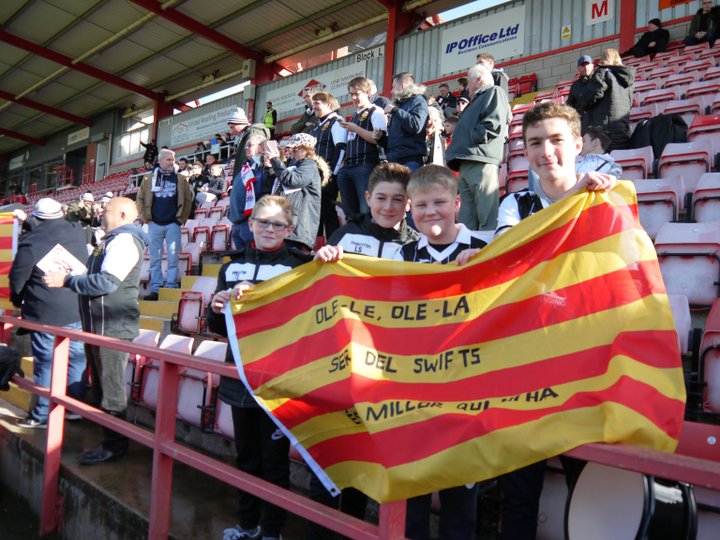 Compared to many of you, I’m still an Isthmian virgin. I only started watching Isthmian League football regularly during the last decade, after being formerly involved with Crawley Town when they were still a non-league club- although I did take in the occasional match in between trips to the Broadfield Stadium. I walked away from the Red Devils a couple of years after they were promoted to the Football League, as I missed the Non-League experience enormously, and began writing about what I was watching- first for fun, and then on a semi-professional basis.

As I was- and am- a neutral, my chosen First XI is not focused on one side; indeed, part of the fun of being a neutral was that I could choose somewhere different to go each week. You will probably notice that it has something of a Sussex flavour, as that’s where I live. So here we go- and after reading my efforts, please feel free to send in yours. Details of how to do that are at the end.

When Bognor won promotion- via the playoffs- in 2017, they had the best defensive record in the Premier Division. Dan was an enormous part of that. Such a commanding presence, and thirteen clean sheets. Still, as professional cricketer he was probably used to facing much harder shots than those fired at him by Isthmian forwards!

I’m cheating a little here. I did watch Tarkan play Isthmian football for Worthing and Redbridge, but in truth my best memories of him came before that, when he was magnificent in defence for Kingstonian as they won the FA Trophy. He was very good in the Isthmian League later in his career, but every time I watched him I was taken back to the days when he was charging down the flanks at Kingsmeadow, skipping past challenges like they weren’t there or making decisive tackles with wilful abandon, so perhaps my Isthmian memories of him are tinged in sepia. Those performances earned him a professional career with Rushden & Diamonds and Dagenham & Redbridge.

I suppose that in truth one of the main reasons I headed occasionally to the Dripping Pan in the early years of the twenty first century was to watch Jay, who I’d first seen during the tail end of his career with Crawley Town. He read the game very well indeed, and it was quite obvious why he’d made the step up to be a professional at Brentford. I watched him play for the Rooks in a second spell later in his career, and also saw him a number of times for Metropolitan Police- including in an FA Cup tie against Crawley Town at Imber Court. These days he’s managing Burgess Hill Town, and still seems to be kicking every ball- if only in his head.

One of the bravest players I’ve ever seen. Given some of the challenges I’ve watched him shrug off I’m surprised he isn’t permanently concussed. Fabulous at reading what’s happening ahead of him and being in the right place at the right time to deal with it, Gary has become a legend for both the Rocks and the Hornets, particularly the latter, where he is the record appearance holder. Also spent some time at Lewes, which I have no recollection of whatsoever!

I was lucky enough to see Wes play a handful of times during the Hawks 2016-17 promotion season, and it was quite easy to understand why he was a club legend. I’d seen him occasionally during his professional days, for Bournemouth and Portsmouth, but he didn’t really make a firm impression on me until his second spell at Havant. His most memorable moment, for me, came in the match which saw the club effectively clinch promotion when defeating nearest rivals Bognor Regis Town one-nil, scoring the only goal when wrong-footing a defender and then finding the top corner- but that was the fourth time I’d seen him that season and he’d been immense each time. Now at Dorking Wanderers.

Magnificent at Kingstonian, even better at Tonbridge Angels. The standout player in a great squad when Angels won promotion (twice- that was the season of Playoffs and Super Playoffs) a couple of years ago, and he has now been Angels Player of the Year for three years in a row. That really is no surprise- indeed the only surprise is that he’s never played professionally.

What a season Heybridge Swifts had in 2017-18, and what a season winger Joan Luque had for them, scoring a goal every two matches and setting up a large number, too. Every time I watched him play he was virtually unstoppable, and it was no surprise when he climbed the ladder with Lincoln City. These days turning out for Maidstone United.

Jordan joined Worthing on loan from Brighton & Hove Albion in April 2016, and only played for the Mackerel Men (although we called them the Rebels back then) six times, but still managed to score eight goals. He was simply superb; scoring from open play and with the dead ball- a wonderful free kick in the Playoff Semi-Final against Hythe Town springs to mind. He also scored in the final against Faversham Town.

I watched Jake play for Brighton and Hove Albion and Whitehawk prior to his move to Billericay Town, and thought that perhaps I’d already seen the best of him- but I was wrong. He was simply unstoppable during the Blues promotion season of 2017-18, scoring goals for fun- and indeed, he’s still doing it even now, at a higher level.

The most consistent player I’ve ever watched in the Isthmian League, without question. His work rate, positioning, the way he brought other players into the game and his unerring ability to find the net- it was difficult to watch him play and to try and write an unbiased report on occasions, as I’d find myself focused on his performance and not notice what was happening around him. One of my holy trinity, along with Allan Clarke of Leeds United and Dannie Bulman of Crawley Town (formerly Ashford Town, although I never saw him play there).

Jason got his professional chance with AFC Wimbledon, and saw it effectively ended with a broken leg at Crawley Town. I was at that match, winced at the tackle- I can still hear the contact, even now, almost nine years later- and never really came back from it, but at least it gave us the chance to continue to watch him. Magnificent once more during Dorking Wanderers title wining season.

I watched Omar regularly during his entire Worthing career, and there were many, many highlights- but one that stands out for me was his goal against Sutton United in the FA Trophy Second Round in January 2017. He picked up the ball in his own half, and set off on a typical barnstorming run, untroubled by the three defenders trying to get to him and finishing into the bottom corner. I saw him score many goals like that, and his partnership with Lloyd Dawes was really special.

Soon after that match he was picked up by Forest Green Rovers where he won promotion to the Football League. He then moved on to Bromley- where he scored at Wembley in the FA Trophy Final- and these days is knocking them in for Sutton United.

Right, now it's your turn- but we'd like you to focus particularly on your club, unless you're a neutral! Have a think and send your First XI to Ian at townsendaround@gmail.com and you'll see it here, soon.