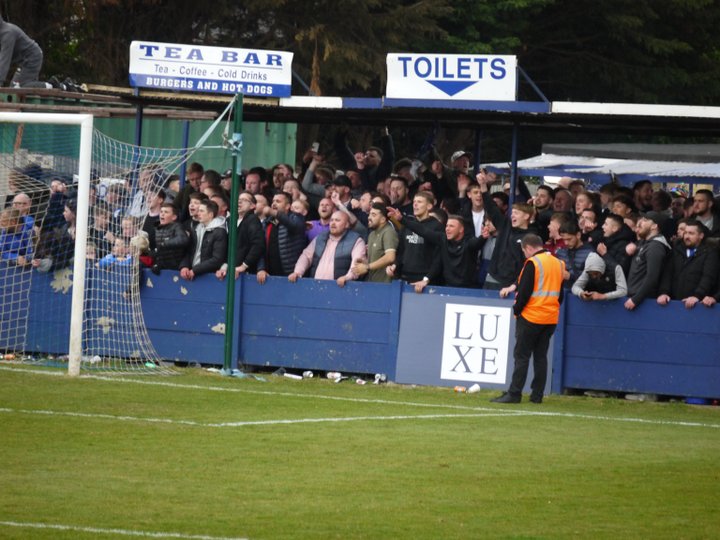 We have a South Central First XI, courtesy of a neutral!

Lio Roberts is next up, giving us a neutral take on the Pitching In Isthmian South Central.

Goalkeeper - Simon Grant (Marlow) - A great shot stopper and figurehead for a Marlow side that conceded just 8 times in the first half of the season. Grant is adept at rushing out to clear through balls and equally good at charging the length of pitch to celebrate or get in the referee’s ear. Probably the league’s best entertainer.

Right-back - Dan Carr (Hanwell Town) - An ever-present who played mostly at right-back this season but kept all the threat of a winger. A nifty dribbler who can make pinpoint crosses, he adds an extra edge to the Hanwell attack while being capable at tracking wingers at the other end of the pitch.

Centre-back - Temi Eweka (Bracknell Town) - An imperious presence who has a great understanding of his partner Bayliss, Eweka is one of several leaders who helped keep the great discipline of this Bracknell side. 12 goals conceded is an incredible record and several of those came when Eweka wasn’t even on the pitch.

Centre-back - Dan Bayliss (Bracknell Town) - The Bracknell centre-backs almost pick themselves for this team with their achievements this year. Bayliss is a man mountain, powerful in the air and outstanding when stepping into tackles. 8 goals on top of all that is a nice bonus too.

Left-back - Liam Gavin (Binfield) - Really not a left-back and it feels almost comical putting him there, but to give credit to a defender who stands out for a team surpassing expectations, I wanted to force him into this team anyway. Gavin’s aggression and aerial dominance helped Binfield to one of the league’s best defensive records in the season half of the season. He’s a serious presence who gives his all to the side.

Central midfield - Harry Rush (Hanwell Town) - Such an impressive, all-action midfielder who contributes in so many ways. He can swing in a good set piece, drift to wide areas, use either foot and create chances like it’s second nature to him. Rush wears the armband for Hanwell and he’d make a fitting captain for this team too.

Central midfield - Ashley Lodge (Chertsey Town) - Another all-rounder with an engine to track attackers for a full 90 minutes. A great passer from deep who can drive forward with the ball and looks competent in several different roles in the midfield. A decent striker of the ball too, he scored in both play-off games.

Right wing - Magnus “Gary” Abisogun (Chertsey Town) - Abisogun’s physicality makes him a handful for any left-back in the league and he’s lethal when played in behind. Just through his ability to get around defenders and his willingness to shoot with either foot, he creates a lot of chances for himself and often finishes them. He’s stood out like a main character of every game I’ve seen him in.

Attacking midfield - Darryl Sanders (Bedfont Sports) - His goal tally speaks for itself but Sanders is so much more. A brilliant playmaker able to disguise a pass very well, it’s not surprising to see “the wizard” picked up by Bracknell this week after being such a central figure in Bedfont’s matches.

Left wing - Seb Bowerman (Bracknell Town) - Seb has been a cut above for years and it’s exciting that he’ll finally be in step 3 with Bracknell having resisted offers from other clubs before. His acceleration and low centre of gravity have always made him a threat and now that he’s become more prolific than ever, he’s been such an asset to the Robins.

Striker - Ogo Obi (Hanwell Town) - I remember seeing him touted as "the new Nigerian Messi” a few years ago and he’s always had natural ability during his drop down the pyramid. This season he’s reached another level, finishing with real poise and playing like a proper number 9. He’s provided a lot of vital contributions so ending with the play-off final winning goal was very fitting.

Shot of the Season 21-22: Chris Neal  We asked our fabulous Pitching In Isthmian Photographers to choose their favourite photograph of the campaign, and tell us why it is important to them.