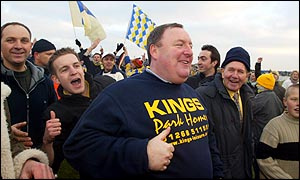 As a Canvey Island supporter, I am privileged to have had many great memories of FA Cup runs in years past.

This season an epic run has taken the Gulls from the Preliminary round to the Second Round proper and whilst this year, the magic of the cup has been diminished by the fact that for many of the games fans have not been allowed to attend, this has still been a run that will be remembered for a long time.

The last time Canvey reached the second round was in 2001. After defeating a Wigan Athletic side managed by Paul Jewell- and highly fancied to do well in Division Two(as it was called then) that season- at the JJB Stadium in the First Round, Gulls found themselves pulled out of the hat at home to Northampton Town.

The game attracted the Match of The Day cameras on a Sunday afternoon to Park Lane. In front of a 3,000 plus crowd, a Canvey side featuring the likes of Steve Tilson, Mark Stimson, Julian Dicks and Neil Gregory attempted to make history by reaching the Third Round for the first time in their history.

The game was covered by Barry Davies and Trevor Brooking in the commentary box with Mark Lawrenson, Alan Hansen and Ray Stubbs in the studio.

In the first half, Canvey were understandably nervous and seemed to freeze in front of the cameras. Their usual passing, quick fire attack seemed to be missing and although they were playing a side 3 leagues above them (Canvey were in the Isthmian Premier at that time), they were hugely disappointing. This provoked an extremely negative reaction from Messrs Hansen and Lawrenson and even the mild mannered Brooking gave Gulls’ midfielder Steve Parmenter a ‘roasting’ for his free kick taking abilities.

This was somewhat harsh considering Canvey were up against a Northampton side featuring the likes of Marco Gabbiadini, Paul McGregor and Darryl Burgess, who had experienced highly distinguished careers at the top end of the Football League.

Canvey had a point to prove and prove it they did. Canvey’s management team of Jeff King and Glen Pennyfather must have heard the half time debate from the BBC studio and used it to their advantage as The Gulls were fired up at the start of the second half.

Within minutes, Canvey had taken the lead. Dicks picked up the ball on the left and played in a cross that Stimson flicked with the back of his foot into the air for Gregory who was arriving in the penalty area.

Gregory who had scored Canvey’s winner against Wigan with a magnificent volley waited for the ball to drop and sent a thunderous volley past keeper Keith Welch and into the net. It sparked wild celebrations amongst the Canvey fans behind the goal.

Canvey still had much of the second half to play but defended resiliently with goalkeeper Ashley Harrison making a number of fine saves.

Dicks may have scored a fairy tale free kick near the end with Welch turning his effort over the crossbar but the goalkeeper saw a red card in the final minutes of the game when he handled Lee Boylan’s goal bound shot whilst outside his area.

Canvey held out comfortably to seal the win. Cue a pitch invasion and Hansen, Lawrenson and Brooking gushing over Gregory’s goal. Canvey had, had to dig in to win the game but a moment of real quality had seen them through.

Gulls were then drawn away to Burnley at Turf Moor in the 3rd Round then riding high in the First Division.

An injury ravaged Canvey side missing the likes of Gregory, Dicks, Tilson and Mick Bodley put in a brave display but an Ian Moore hat-trick gave the Clarets a 4-1 win that ended Gulls’ amazing run in the competition.

Now 19 years later, Canvey face Boreham Wood with a prize of a place in the third round at stake. Can the Gulls pull off a shock result? Well, if their past history is anything to go by, you can never write them off.

Thanks to David for his memories. Would you like to share your greatest FA Cup moment? Send an email to Ian at townsendaround@gmail.comand we'll feature it here!

Image of Jeff King and Canvey supporters taken from BBC.co.uk.

 Stat Attack: Our Immovable Objects! Whilst we wait to have some actual football to write about, we continue to search the statistics. This time, we look at the teams with the most rock-solid defences

Marlow Day: Programmes from Yesteryear- Marlow v Tottenham Hotspur, 2nd January 1993  To celebrate Marlow's one hundred and fiftieth birthday we've gone back through our archives, to look once more at the day the faced Spurs at White Hart Lane