New specials have all the answers! 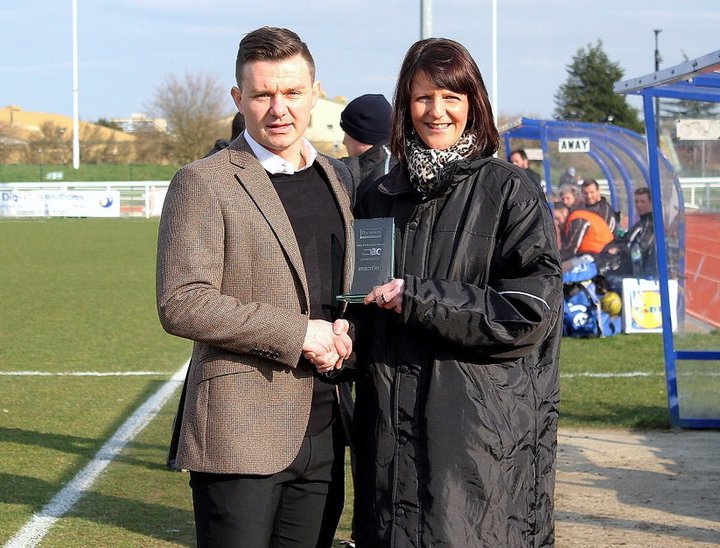 The Ryman Round-up Show may have all the answers if you're wondering about future changes to the laws of the game or anything else from ground-grading to the rules governing promotion and relegation!

To celebrate the final weeks of the 2016-17 season and update supporters on the latest news from Wembley and the Ryman League's Dartford HQ, the team behind the hit weekly podcasts and live Monday night broadcasts on Facebook have produced two specially recorded shows with a trio of experts who definitely do know - Ryman League chairman Nick Robinson, vice-chairman Craig Johnson and secretary Kellie Discipline.

After releasing the first joint interview with the chairman and vice-chairman to rave reviews, the show's host David Square sat down with the Ryman League's secretary at Aveley's Mill Field to record the second installment of The Isthmian Off The Cuff Show.

As well as answering Square's queries, she arrived to a long list of questions from fans keen to hear her thoughts following her long career in the game. Not that she would have struggled with her experience since starting out as the secretary of Erith & Belvedere before stepping up to become secretary of the Football Conference and later Thamesmead Town.

Appointed as the Ryman League's secretary in April 2011 after joining the board a year after Mead's promotion in 2008, the long-serving official is also a director of the Kent FA and a 2016 graduate of the Football Association's Women's Leadership programme.

Both specials have received thousands of hits since being released ahead of Monday night's latest two hour phone-in for fans, players and officials of the Ryman League. Recorded at the Harlow Arena, this week's show features another another top line-up of guests including Marc White, manager and owner of Dorking, and Danny Heale and Joe Keith from Canvey Island.

Launched with the backing of the Ryman League during the 2013-14 season, the Ryman Round-up show now has its own channel on YouTube and has been regularly attracting more than 2,000 viewers and listeners, one recent episode pulling in more than 3,500 combined hits.

Since returning in November with then new Leatherhead boss Jimmy Bullard as its first star guest, a host of fans, players, managers and officials have been guests on the show dedicated to the news and action in the Ryman League.

Supporters who can't tune in live on Monday nights can also listen to the show later at their leisure after it is packaged up as a podcast on Audioboom and iTunes.

To listen to any of this season's podcasts on Audioboom or iTunes, click here: http://itun.es/gb/d_034.c or http://audioboom.com/RYMANROUNDUPSHOW.

For more information on the show, clubs and supporters should call at 07510 145423 or visit www.hawksradio.co.uk.

Celebrations will be on tap for fans!  Folkestone Invicta are staging a two day beer festival at the Fullicks Stadium next weekend before hosting Tonbridge Angels in their final home game of Ryman League campaign on Easter Bank Holiday Monday.