We’re back in the Premier Division, and off to Bishop’s Stortford, where Steven Vale is experiencing a new emotion- confidence- and promoting some world-class chips

We asked supporters of our Pitching In Isthmian League clubs to preview the new season, reflect on the old and predict the final outcome. Their predicted 1-20 (or 22) will be worked into a final table which you will see just before the big kick off. Steven Vale often responds to this feature for Bishop’s Stortford and his optimism is usually tempered with caution- but this time, not so much!

Definitely our FA Cup run. Beating St. Albans 2-0 live on national TV was one of the best nights in Stortford’s recent history. We were also extremely unlucky to go out on penalties at Brackley Town in the next round when we fought back from 3-1 down to get to 3-3 and then hit the bar in the last minute. 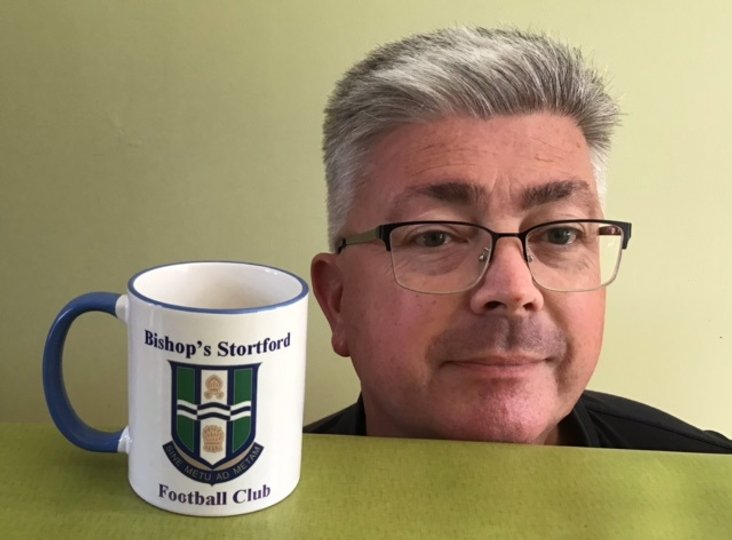 A double mug-shot, one of which is Steven Vale

I think Jake Cass will make a big impact this season, probably on the opposition centre half! Jake is a physical centre forward who had an excellent first spell with us before moving onto Braintree, who were then in the National League. Unfortunately he suffered a broken leg against Sutton United in only his fourth game for Braintree but he is now coming back to full fitness and I expect him to form a very fruitful partnership with Frankie Merrifield.

The other player I would highlight is new signing Jonny Giles. He has played for various sides at a higher level and the club and fans expect great things from him this season.

Promotion, either automatically or via the play-offs. This is the best Stortford side for several years.

Worthing as I’m expecting that to be a top of the table clash.

I know I won’t win any prizes for originality, but the Dripping Pan (Lewes) is my favourite away ground.

Since Harlow started their slide down the pyramid we no longer play any really local rivals. I think Worthing will be our main rivals for the title.

Our chips are world class. Try to time your purchase to just before the half time whistle to avoid the queues and ensure they are freshly fried.

Jamie Cureton. A quality player who played the game in the right way with a smile on his face and who always appreciated the support he got from the fans.