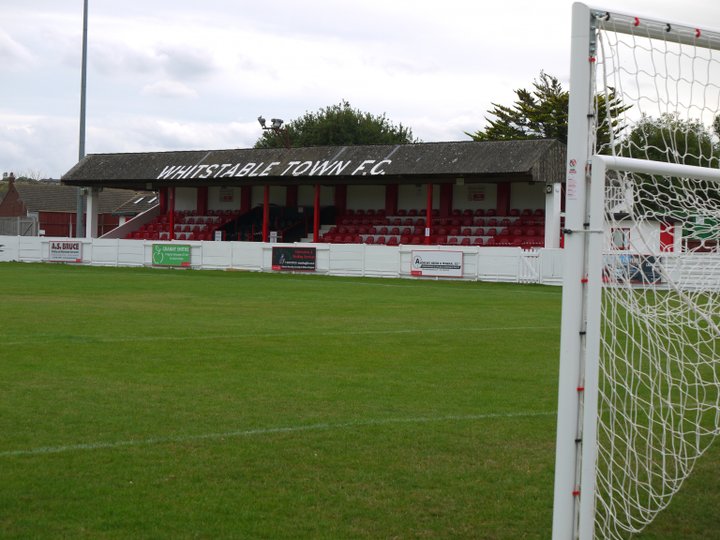 We’re off to the seaside once more, but the seashore here is littered with the remnants of many millions of oysters. Richard Tennant brings us his guide to all things Whitstable

We asked supporters of our Pitching In Isthmian League clubs to preview the new season, reflect on the old and predict the final outcome. Their predicted 1-20 (or 22) will be worked into a final table which you will see just before the big kick off. Richard is the Secretary/Treasurer of the Supporters Trust Fund, a fund set up to help with the playing budget, and has been following the club since abandoning Wimbledon when they moved to Milton Keynes- at which point he decided that his local club were far more interesting, and of course he’s right.

Although it hardly started, I would say our 3-2 win away to Three Bridges. We were down and out with ten minutes left, with the home side deploying some diabolical time wasting tactics, however a superb threaded pass by Liam Gillies (Described as a hoof upfield by the local reporter) put in Aaron Millbank to slot home, then in injury time a superb half volley by academy player Mohammed Chan, sealed the points, although we had to witness our manager dancing on crutches after his hip operation. 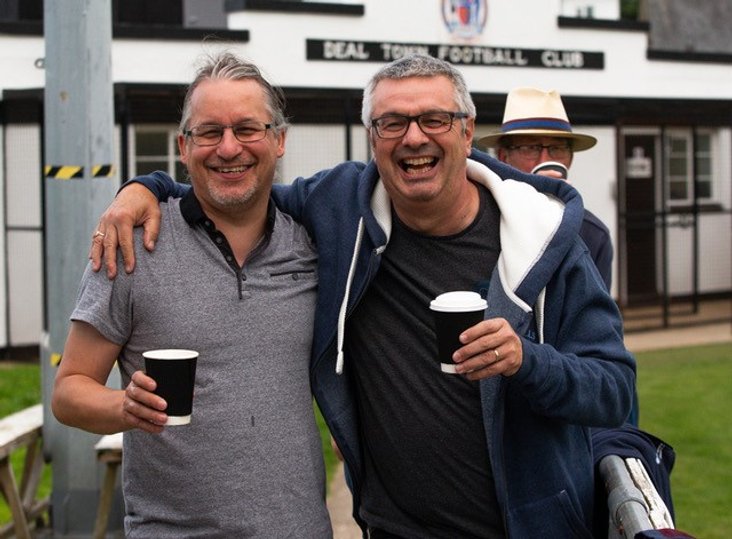 Richard Tennant (on the right, Steve Growns on the left)

Dan Eason our goalkeeper is- in my opinion- the best in the division, and on the tail of last year we have signed some strong defenders in Jack Miles and Tom Mills, while we have recruited the skilful Tom Carlton from bitter rivals Herne Bay. Aaron Millbank will I feel continue to find the net, and the academy scheme is producing players that look up to the mark.

As long as we don't finish in the bottom four I'll be happy. There are teams in this division whose budget far outweighs ours, but we as a club work within our means and will be around for years to come. This is why our Trust Fund helps enormously towards playing costs. I will predict 12th.

Herne Bay home and away, as it's a real big rivalry between the two clubs, akin to Arsenal/Tottenham. Also Faversham away for the pub crawl, Lancing away as it’s a new ground to me, and finally Hastings Utd away- reasons being in the next question!

Pilot Field, Hastings. We had a real battle there just before the first lockdown, losing to two dubious penalties, however I love the ground for its atmosphere, and as a group of supporters this year we plan to make a weekend of it in September. Last year we took a mini bus down for a very long day out.
6. Who do you consider your biggest rivals- and why?

Herne Bay, just down the coast, bitter enemies on the field, with players from each team having played for the other to add that spice. It's a game you do not want to lose, and in the last full season honours were shared with both teams winning their home game 3-0.

Make a full day of it. Visit the town early and sample the fine local cuisine, of Oysters and traditional Fish and Chips (you can't get Oysters in Herne Bay)! At the ground you will be welcomed by a very friendly committee with a bar and food on offer, also marvel at our stand with the club name painted on it. Finally, after the game, retire to the beach to watch a spectacular sunset.

Although Ian Pulman would rank highly as the engine up front, and Mark Lane our goalkeeping coach (if he opened his wallet), Steve Marshall would shade it, purely for when my kids were mascots back in 2006 (they were 11, 8 and 3). Steve took time to have a kick about with them, which made their day memorable and mine. Also I will add Danny Ward who was a manager, let me take a penalty on my birthday after the season had finished, which I duly scored.

Hastings United will win the league, with Whitehawk, Ashford United, Cray Valley and Chichester City among the front runners.

Tuesday night is football night  Who needs the Olympics, as our sides served up goals galore in their pre-season matches?