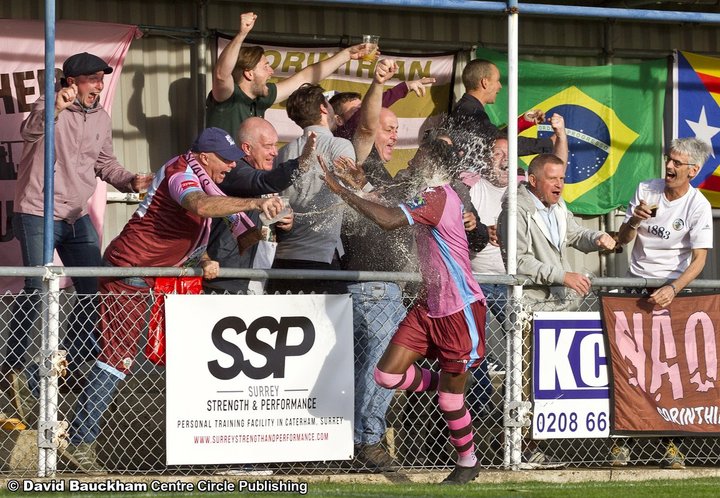 We asked supporters of our Pitching In Isthmian League clubs to preview the new season, reflect on the old and predict the final outcome. Their predicted 1-20 (or 22) will be worked into a final table which you will see just before the big kick off. Stuart has stopped photographing tea bars and cricket pitches to think about football!

It was short, but there were a number of real positives. We were the highest level playing that allowed crowds and thus had some bumper crowds. We joked that on one week where we were at the 600 capacity, we were the joint highest attended match in the UK! Of all the games we played, it must be the 5-4 win over Hendon in the FA Trophy. What an occasion – the place was rocking!

It’s always hard to tell with us, as we never rely on one or two ‘star’ players. Rather what mix works best on the pitch. Defender, Jack Strange, who’s been with James since his youth days has become a fantastic defender and our defensive record over the last couple of seasons is testament to that.

If we can add goals (as easy as that is, of course) then the sky is the limit. We’ve had a good pre-season and played some delightful football. Get off to a good start, get the momentum going and who knows!?

I’m a sucker for a new ground and sadly, for another season, we don’t have any newbies in the league, so I’m hoping for some away days in the cup. Of those in the league, I guess any that we didn’t fulfil last season. We’re still yet to play East Thurrock away, so hoping third time’s a charm.

We actually have Lewes listed for a Saturday, which is a bonus for such a great place. Maybe, just maybe we’ll get to fulfil that fixture rather than being bumped to a Wednesday. I also enjoy Folkestone, Worthing and Carshalton amongst others.

That’d have to be our tenants Kingstonian. You couldn’t get a geographically closer derby.

Don’t get lost going up and down the A3 between roundabouts. We’re located along the slip road. So many people get lost trying to find us for the first time. Try some of the great food and drink that’s on offer most matchdays. We often have Feijoada (we’ve talked about doing it in pies – PIEJOADA), Caipirinhas and our very own Corinthian and Casuals ales, brewed by Brightwater Brewery, who own the smallest pub in the country!

Captain Danny Bracken. Just bleeds Casuals. Eleven years, nearly 450 competitive appearances – over 500 including friendlies. Has etched his place as a Corinthian great in a club filled with footballing giants.

Look out for the final predicted tables later this week!