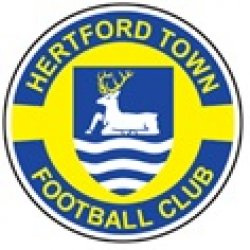 We're off to Hertingfordbury Park, for the views of David Laws. He mentions Ware a couple of times, but we think he got away with it...

We’re heading South Central and we’re off to Hertingfordbury Park, where David Laws takes us on a guided tour of Hertford Town.

Great. Hopefully we will all appreciate it more and local clubs will benefit from increased interest and attendances. Fans back from step-3 and below makes perfect sense as the reality of the situation is that even at 15% of ground capacity – this is more than most clubs achieve. I think Hertford’s new capacity will be around 400 – Most attendances last season were around 150 except for the 600+ against Ware. Hopefully more fans will buy season tickets as well …

Will attend pretty much all home games – perhaps less away as my preference is usually to go by train and make a day of it. Will avoid lingering in the clubhouse if over-populated. One of the positives at this level is being able to take drinks outside (except for the FAC for some reason).

The 3-3 draw away to local rivals Ware. Even the most loyal of Hertford Town fans were expecting a heavy defeat against ‘well financed’ rivals and at 3-1 up probably should have won – but it was the most inspiring game of the season

Most Hertford fans would say the 1-9 home capitulation to Westfield. But for me it was the 6-0 away defeat at Chipstead. A midweek game- torrential rain, flooded roads. Chipstead looked like scoring with every attack. We didn’t look like we really wanted to be there (which was fair enough) so I left after 70 mins due to the performance and the state of the roads. Special mention to the great pitch at Chipstead.

Tough to call. Last season we became (pretty much) a no paying budget club, mainly using players from the Manager’s academy. We played some nice passing football at times and had some notable wins. But overall we struggled as our final placing suggested.

We still need further announcements on the squad. I’m assuming that there will be less money around generally so perhaps that will even things out a bit. Think some clubs will do better. Staines were the whipping boys last season but they were Conf/Nat-S a few years ago so would expect them to improve. Will Ware still be well financed ? Who knows … I’m gonna go for a modest improvement and 12th place with 46 points. Think that’s being fairly positive.

All of them. Special mention for the first game – FAC against Maldon and Tiptree – especially after their FAC heroics last season. Also Ware, Harlow who are the biggest local rivals.

Marlow – Like the ground, the town and the train trip

It’s always been Ware. Over the last few decades they have been a division higher for much of that time. But we have been in the same division for the last 3 seasons. Hertford/Ware rivalry is centuries old and extends way beyond football ..

Come early – visit the town first – check the club’s twitter account as sometimes there are reduced booze prices for early birds. Enjoy the experience at the ground – always been a friendly club. Also enjoy the banter with the home (Stable end) fans ..

Mickey Fredericks – A menace to defenders back in 1990. Around about the Paul Fairclough era. Recent call outs to Tommy Wade and Charlie Mann. Inbetween these two eras – Kevin Cooper, a great striker

Terry talks Marlow  Terry Staines, Chairman of Pitching In Isthmian South Central side Marlow, talks about the challenges brought by Covid- and his hopes for the future