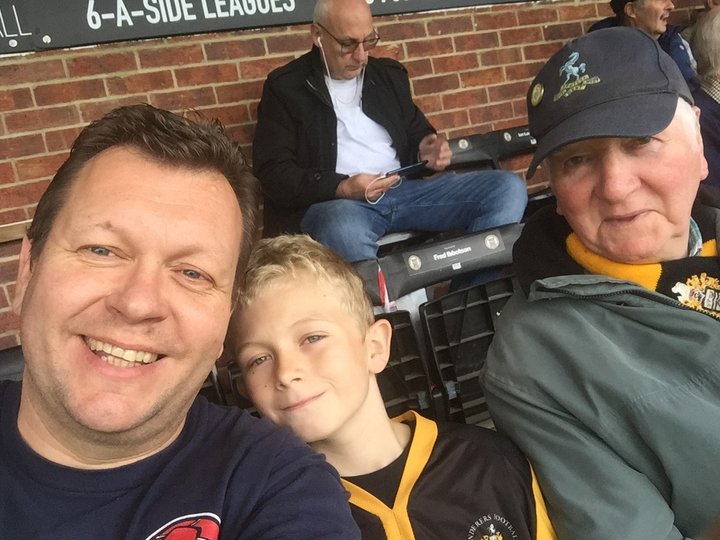 We head back to the Pitching In Isthmian Premier, and get the views of another Cray Wanderers fan. Colin Head is our guide.

We’re back in the Pitching In Isthmian Premier, and making a return trip to Cray Wanderers, courtesy of Colin Head.

Pleased it’s coming back with fans allowed to attend, hoping it’s not too much of a change from before, but expecting things to be a little different.

I think my match day routine will pretty much stay the same, I attend the majority of Cray’s home games with my Dad and my son, so we’ll follow whatever processes that are put in place, but in general I think it will be get to the ground around 2.30, buy a programme, cup of coffee and find our seats in the stand. The only sad difference will be that my ten year old son won’t be able to high five all the players as they head on the pitch and leave after the game, which he has always enjoyed.

There were so many good performances and results last season. Wins at Enfield Town and Worthing stand out, on a personal note my son being mascot for the game with Haringey Borough last September and my Dad receiving an award for 70 years of supporting Cray Wands on the pitch earlier this year.

The Boxing Day game at home to Leatherhead and also losing Andre Coker to Bromley. Andre had been outstanding for The Wands in the first half of the season, The Ravens only played him for ten minutes in one match and then loaned him out to another team in Cray’s division!

I think Cray will be up near the top again, the squad appears to be similar to the last campaign and they were getting better and better with each match just before the lockdown. I’m sure the manager Tony Russell and his coaches Joe Vines & Nathan White will be able to keep that momentum going into this new season despite the lengthy break. I think The Wands took many teams by surprise last season, so that element won’t be there this time round with the league constitution unchanged. There are a lot of good teams in this division so it won’t be easy for anyone.

The first home league game, I always enjoy the buzz of the start of the season, the optimism and excitement of the months ahead. After that it will depend on who is up there and challenging. Games with Worthing are always good and I enjoy the visit of Enfield Town and their large support.

7. What is your favourite away ground?
I don’t get to many away games, but Lewes’ Dripping Pan ground is a lovely place to go.

There is no real local rivalry to speak off in the current division. Games with Worthing and Lewes always seem to have an extra edge to them.
The traditional rivals from the Kent League days were Crockenhill and then of course there is Bromley.

Hayes Lane is a great place to see football, even though the new stand behind the goal is closed for Cray games, there are plenty of good spots to choose to watch the match from. The welcome is always friendly and the food & bar facilities are good. Definitely buy a programme as I think it’s one of the best around. Allow yourself a good 30 minutes if you are going to walk to the ground from Bromley South station or catch a 119 bus.

Phil Williams should always get a mention as he was an out and out goal scorer who was superb in his spell at The Wands in the 1980’s, but I’m going for Sam Wood who played for the first team at only 17 years old and was outstanding as a left wing back. He moved on to Bromley and then had a career in the football league with Brentford and Wycombe.

 More Jammers! Four more sign on for the Pitching In Isthmian North campaign at Maldon and Tiptree

Pitching In Isthmian Supporters Predictions 2020-21: Hertford Town  We're off to Hertingfordbury Park, for the views of David Laws. He mentions Ware a couple of times, but we think he got away with it...