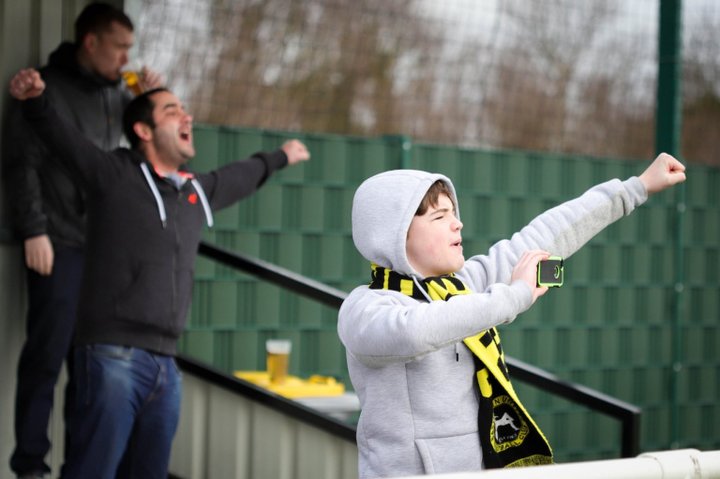 Tommy Whale tells us a tale of Basildon United

We’re in the Pitching In Isthmian North, and we’re all a buzz. It’s time for Tommy Whale to lift the lid on Basildon United.

I feel really excited for the return of football! It feels like forever since I watched the mighty bees play, since that pre match bag of chips, and walk to the ground! I really can’t wait for the return, however part of me is a little bit nervous for the return as it will be different so it will be strange in some ways, I’m sure.

My favourite moment of last season would probably have been when we hadn’t won a game in a long time, 2 months I believe, and we were 16th in the league and snatched a 1-0 win over high-flying Tilbury away from home! Ernest Okah scored the goal and the fans went absolutely mental! I think that’s the loudest celebration I’ve heard in my time as a Basildon supporter! It was a fantastic day out!

Worst moment would have to had been when we were playing Dereham Town on a cold, wet Tuesday night at home and we got beat 3-0. It was not a pleasant night by any means!

Our last two seasons in the Isthmian League have not been too good, therefore others may disagree with me. But I have a feeling this season will be good! We’ve retained some good players and made some really good signings so far. Our manager Alex Salmon showed last season that he was a good manager! Sure we didn’t win every game, but I saw a massive change in the efforts of the squad and the performances when he took over! So I think if things continue the way they were going when he took over then I think this could turn out to be a good season maybe a mid-table finish for us.

I think the game I am most looking forward to is against Tilbury! That always turns out to be a good fixture in terms of the atmosphere quite a good derby! I’d probably say that it’s our biggest derby without Bowers and Pitsea in the league. I’m also looking forward to playing Canvey Island especially away. I always love going to Park Lane the Canvey fans always produce a good atmosphere and I love their ground too! I’d go as far as to say one of the best in the league.

I’d have to say as I mentioned in the previous answer Canvey Island would have to be my favourite away ground. Always love the day out when travelling to Canvey. The seaside walk before the game is always enjoyable. When you get into the ground it’s a very nice ground with very nice people too.
I get along with a lot of the Canvey Island supporters so that makes going to the ground an enjoyable experience. I love the terrace they have behind one of the goals where if you stand at the top you have a fantastic view of the pitch! The Canvey fans are always creating a fantastic atmosphere too which is always great.

As mentioned before our biggest rivals would be our local neighbours Bowers and Pitsea. Always a feisty derby when we play each other- the atmosphere is always great and it’s always a great day out whenever we play them. Home or away nothing beats ”El Basico” as the fans call it.

My favourite all time player for the club is someone who I think all Basildon fans would agree with, and that is Marcus Bowers. Spent only a year with the club but has been given the title of a club legend because of one special moment. It was the final day of the Essex Senior League season and we needed a goal to get promoted and he took the perfect opportunity to get it! He struck it and it went to the right of the keeper winning the game 1-0 against Redbridge to promote us to the Isthmian League for the first time in 21 years. An unforgettable moment!