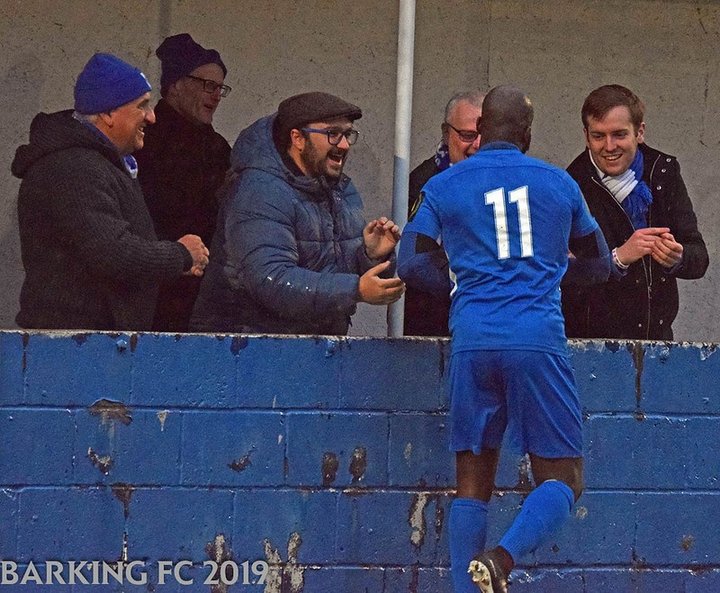 It's time to take a look at that new 3G pitch, as we're off to Barking, courtesy of Trevor Gilbert.

We’re off to the home town of Billy Bragg, to hear from Trevor Gilbert- who doesn’t want to change the world, but would quite like a play-off push!

I think we’ve reached the right time for the return of non-league football now; I didn’t feel quite as strongly as some other people in non-league and wasn’t comfortable with the constant criticism the FA faced over the summer.

We’re still in a clearly fluid situation and everyone all around the world is still trying to figure out to do with all sport – elite down. I think a lot of people failed to read what was actually going on and were directing criticism at the FA when they had already submitted suggestions on how we came back to the relevant government bodies – I think there has to be some realism in that as much as we love non-league football it’s not exactly the most important thing in the world right now and that a slow return was inevitable. Clubs have and are clearly doing their best to bring everyone back so it’s now up to individuals to how safe they feel.

I’m not sure it’ll change my habits too much – I normally arrive early to enter the team line-ups on Football Web Pages and find a seat inside to do it but I think now I’ll keep myself outside as much as possible; the same applies for away matches – get myself a drink and enjoy the stadium rather than sit in the clubhouse. Apart from that I don’t see much change, you’ll find me behind whatever goal Barking are attacking and I normally don’t stand still for very long (it must annoy the others behind the goal but they’ve never said anything!) so I’ll probably do the same but make sure I keep my distance from everyone!

There were a few good moments! We did the double over league favourites Westfield without conceding a goal home or away – two deserved wins. The performance in the Essex Senior Cup away to local rivals Dagenham & Redbridge was a big plus – losing in the last minute was a blow but to take the lead twice against a team of full of professionals was a good sight and you couldn’t fault the effort or play of the team. The favourite moment for me was probably another cup game – this time the FA Trophy when we defeated Guernsey. Wasn’t perhaps the best ever game but each side scored a great goal (Abs Seymour’s volley for us and a free kick thunderbolt from Ross Allen for Guernsey) but it was clear they were a good team and sometimes there’s nothing better than sneaking a goal with 5 minutes left to win a game.

We had a pretty painful start to the season (apart from the Aveley win in the FA Cup) – the loss to Waltham Abbey at the end of that run was hard to stomach as it was all of our own doing. After that we picked up and we lost a few games but I didn’t think we were that bad in most of them – except for FC Romania at home. That was comfortably the worst game of the season. 90 minutes of worst moments.

Over the last few years, we tend to start the season pretty poorly in the league and we end up playing a bit of a catchup. If we can have an average start to the season then I think we will be somewhere in the top ten. You always look up at the playoffs and think it’s a possibility and I do think it is, but it’s not an aim or a focus. We always say that the first aim is to stay up and then we can build from there. The club is going through a massive rebuilding phase at the moment with the new Astroturf pitch so our performance this season will depend on how we adapt to that.

All of the games at home on our new pitch! As well as those, Bedfont Sports was a very smart compact stadium with nice people so hopefully this year brings up some more interesting games than the two 0-0’s last season! Also the grounds from last season that were new that we ended up not visiting – Bracknell Town, Chertsey Town, Staines Town and Northwood (not entirely new but not visited for many years).

As mentioned previously, Bedfont Sports is up there and for all round facilities I was impressed with Hanwell Town – nice pitch, nice people, good team. Hopefully this season we can take some points off them!

We have a longstanding rivalry with FC Romania that goes back to our days in the Essex Senior League – it is always nice to get a win over them! Waltham Abbey are probably closest in terms of locality and it is always a good game against them – they had a good team last year that I thought was quite similar to us.

In these times – bring your debit card and go contactless! We will still accept cash but encourage the use of plastic where you can. Our dedicated (and most definitely overworked) secretary has put together a risk assessment which can be found on our website.

 Yellows worship Temple after Shane gets four in comeback win, whilst Cray Valley notch six and Carshalton hit five We were back in FA Cup action- and it was worth waiting for. Here's a round up of the action.