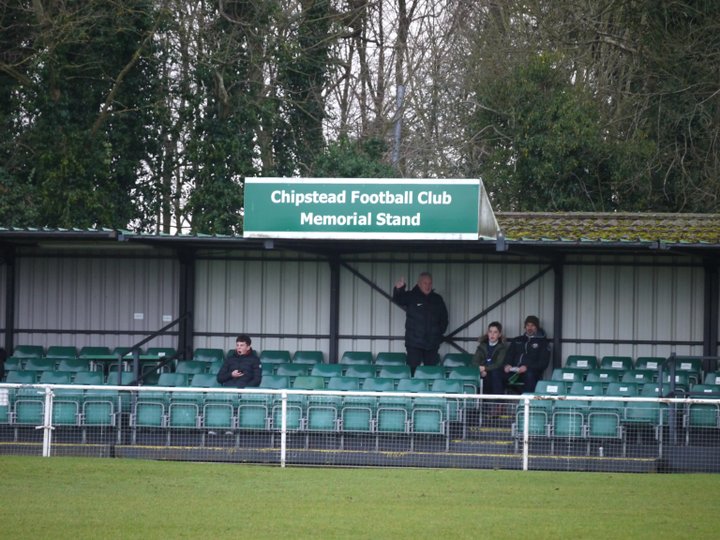 Trevor takes the High Road (by car!), and introduces us to the world of Chipstead.

We’re staying in the Pitching In South Central Division, and off to Chipstead, courtesy of Trevor Stotten.

1. How do you feel about the return of football?
Cautious. We don’t have large crowds, but narrow surroundings make social distancing a little tricky - while I guess the issues with changing rooms and showers remain the principal issue.

I’m annoyed if I miss any 1st team or under-18 action home or away, and this hasn’t changed - the virus isn’t going away, so we just have to take care and accept any enforced precautions.
.

Winning 4-1 at Tooting & Mitcham United. They always seem to have the upper hand against us, and this made up for some heavy defeats in the past, notably a 7-0 loss at the High Road in November 2016.

Losing 7-0 at Welling in the FA Cup 2nd Qualifying Round.

The pandemic came just as the season was coming to an interesting conclusion - could we make the playoffs? Even though we lost our last game at home to Ashford Town, we still had a chance, but we’ll never know now - hopefully we’ll feature up at the right end of the table again this time.

Bracknell away on 19th September, because that will be the 1st league game of the season, and a sense that some normality is returning to life. And then Tooting and Mitcham United at home on 28th December, football over Christmas for a change!

Tooting & Mitcham United. A purpose-built stadium ready for football at a higher level, which they will surely attain one day. There’s always a friendly welcome, but then I did fundraise for them back in the day, when my brother-in-law David Penn was programme editor, and it was thanks to him that I became involved with football at this level.

Tooting & Mitcham United and South Park, I guess- since Whyteleafe, just down the road, were put in a different division from us!

Try to come by car - the nearest train stations are Chipstead (followed by a long walk up narrow lanes with no pavements!) or Coulsdon South (followed by a cab ride, or the 405 bus to Hooley, Star Lane & a shorter walk up similarly awkward narrow lanes!) - hopefully we’ll make you feel welcome in our bar & Muddy Boot cafe on the halfway line after all that effort!

Sam Bell - a nice guy, with a lovely family, who always gives his all on the pitch, whether as a centre-forward or wider on the right .

 Pitching In Isthmian Supporters Predictions 2020-21: Hornchurch We're taking the District Line and heading to visit those lovely Urchins at Hornchurch FC, in the company of Peter Hay.

Steventon heads back to Kent  Two months in Sussex was enough, apparently!