The South East people have spoken! But what did they say? Find out here!

As we witness every summer, it’s rather difficult to predict the outcome of a league season. No matter how much you study form, look at the squads, wonder how much importance you can give to pre-season results, and try to predict your own team somewhere around fifth place (it looks as if around 80% of respondents do this, as if they don’t want to tempt fate by going higher!), there are so many variables that you won’t be able to factor in that getting it right is well-nigh impossible.

So, keeping all that in mind, let’s take a look at how you think the South East Division will end.

The first thing you were clear about was that you expected Hastings United to take the title. A third of you placed them first, everyone else who voted placed them second. You also predicted a Sussex one-two, by putting Whitehawk in second place- although Ashford United, who you placed third and who knocked the Hawks out of the cup last weekend, might have something to say about that. 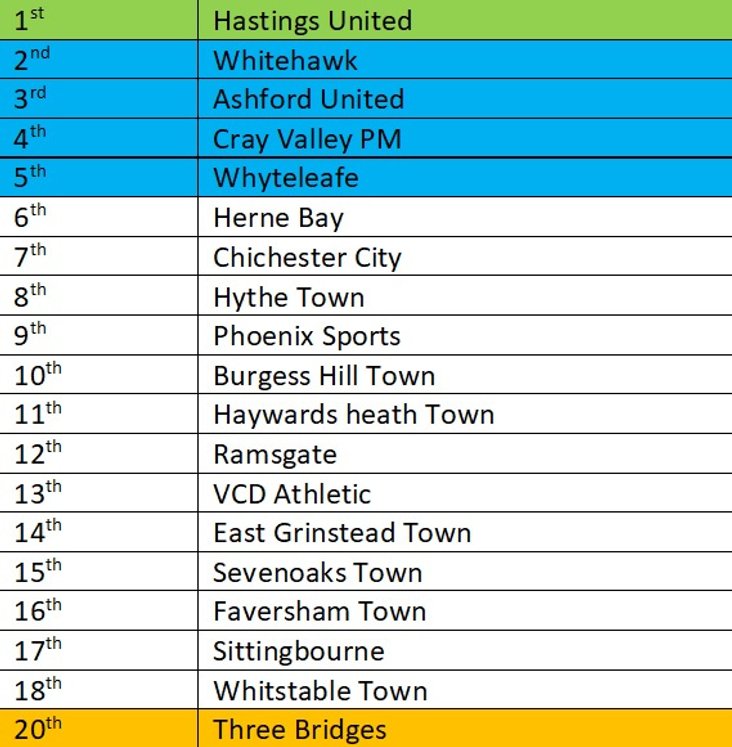 Cray Valley PM are the side you put in fourth place- although given the quality of their summer strengthening they’ll be looking to go three better- and you expect Whyteleafe to take the final playoff place.

At the other end, due to pyramid restructuring, nobody will be automatically relegated. Instead, the bottom side will host a playoff match against a second placed side from Step Five for the right to remain in the Pitching In Isthmian League. You suspect that the side holding them all up and as such playing host to that match will be Three Bridges, and you thought that fairly emphatically, with half of you placing them at the bottom of the pile.

Given Guernsey’s late enforced withdrawal we’ve emitted them from the list, but you would have had them in thirteenth place.

Our opening day South East Division fixtures look like this:

For probably the only time this season we won’t be previewing the matches, as there’s little we can say about form that will make much sense! But please head along. Make sure you’ve got face coverings for the areas that are appropriate, be as cash-free as possible, and be prepared to register for track and trace purposes- many of our clubs are using the evePASS app, available on Apple and Android mobile phones.

Have a wonderful season!