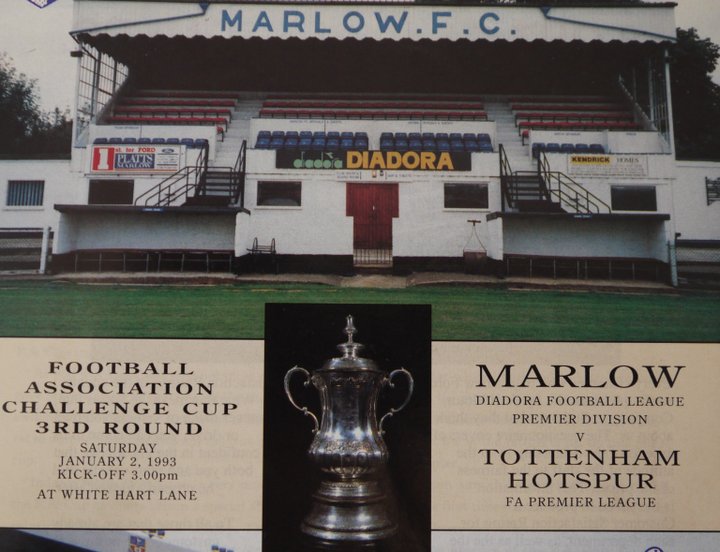 Marlow reached the FA Cup Third Round in 1992-93, and headed to White Hart Lane. We bring you words, programme pictures, and some video highlights

Saturday 2nd January 1993 should have seen Spurs walking out to warm up under the watchful gaze of not only the people in the main stand at Alfred Davis Ground, but of the large number of Red Kites hovering overhead, having been reintroduced to the area during the previous decades. The pretty home of Marlow FC certainly had little in common with White Hart Lane, which, although its capacity was reduced due to implementing the changes from the Taylor Report, still held more than ten times the number that Marlow could have hosted- but it was historic, beautiful and home to the club who had been drawn first out of the velvet bag.

Sadly safety concerns had forced the clubs arm, with the emergency services and local authority being quite clear that the numbers expected to arrive for the tie could neither be accommodated nor segregated if Marlow played the match at home. The match was therefore moved to the home of Tottenham, and the little club was vilified by one tabloid for casting aside tradition for big bucks. Oh, the irony! 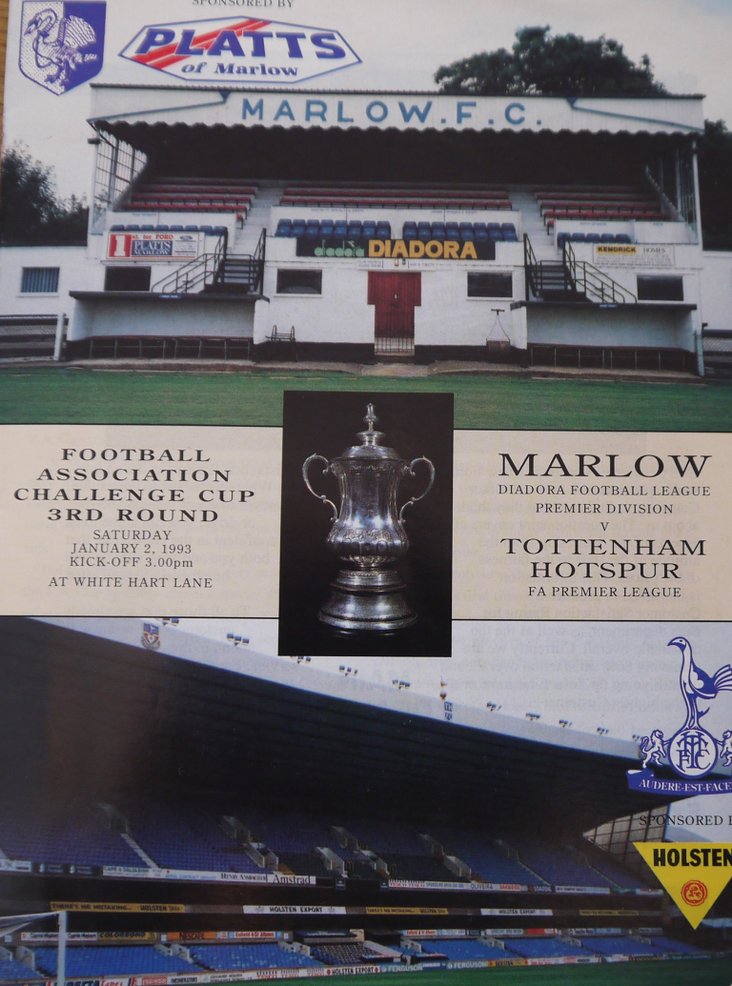 Spurs, of course, were playing their first match in this season’s competition. They’d won the cup two years previously, defeating Brian Clough’s Nottingham Forest at Wembley in a match which became almost as well known for Paul ‘Gazza’ Gascoigne’s injury as for the outcome.

Marlow lined up as follows, under manager Dave Russell: 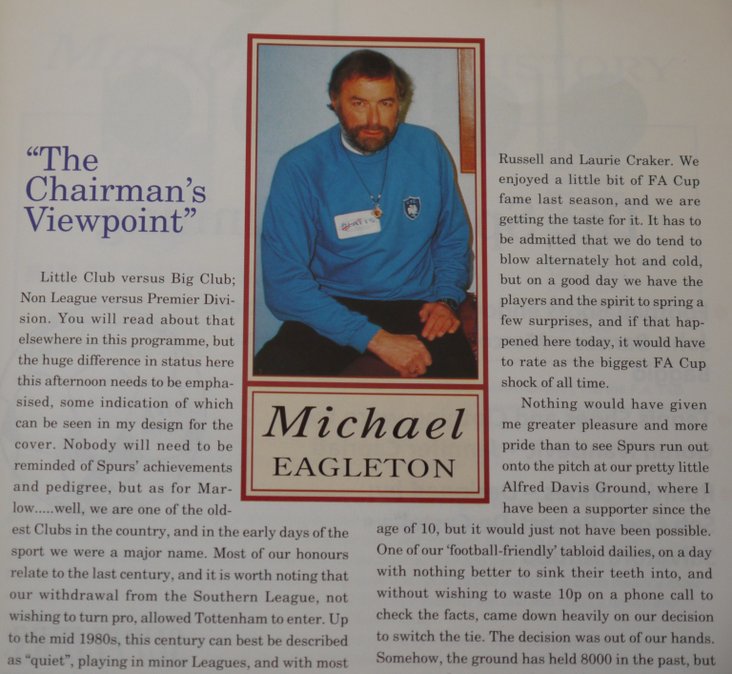 Tottenham Hotspur lined up as follows, under manager Doug Livermore:

Marlow, rather unsurprisingly given the talent arrayed against them and having had to give up home advantage, lost the match by five goals to one. Nick Barmby got two goals, Vinny Samways also picked up a brace, Teddy Sheringham got the other. 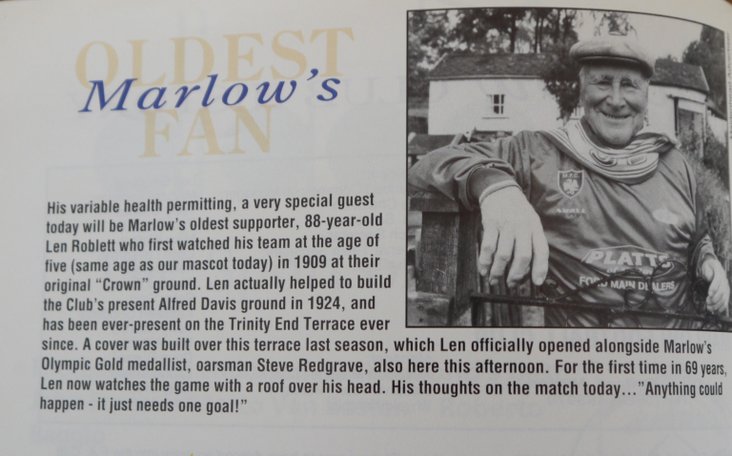 Marlow’s consolation was scored by their skipper, David Lay. Twenty six and a half thousand fans turned up to watch, with three thousand supporting the ‘home’ team. 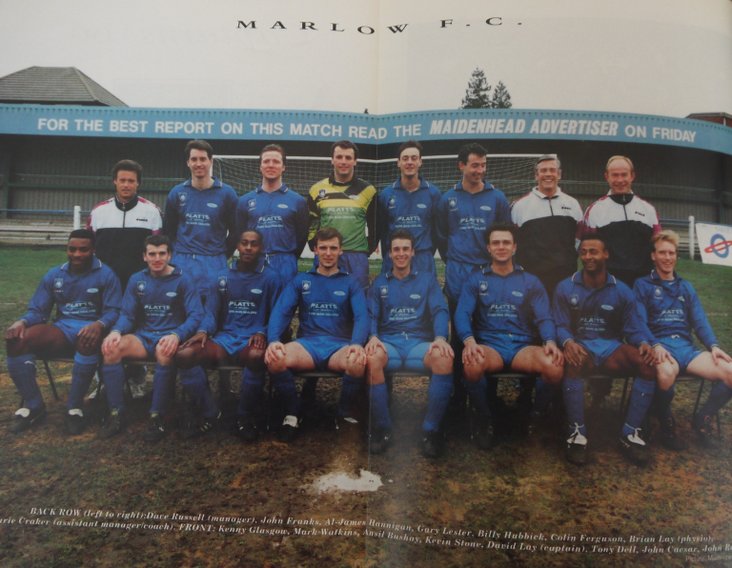 The Marlow squad on a fold out page

Marlow finished their campaign in fifteenth place, only four points above the relegation positions, which were filled by Bognor Regis Town, Windsor and Eton and Staines Town. The following season they got to the First Round, where they lost to Plymouth Argyle, and in 1994-95 they reached the Third Round again, this time bowing out to Swindon Town after defeating Sutton United, Oxford United and Woking. They’ve never reached the First Round of the competition since.

Tottenham Hotspur didn’t win the FA Cup, because the year didn’t end in one. They did go on to defeat Norwich City, Wimbledon and Manchester City, but were removed from the competition at the Semi-Final stage, losing to Arsenal. This was the inaugural season of the Premier League, and Spurs ended it in eighth place, twenty five points behind winners Manchester United- but ahead of Arsenal, which was probably more important. Aston Villa were runners up, Norwich City came third. Teddy Sheringham was, however, the Golden Boot winner, and his team mate Darren Anderton got the second highest number of assists, behind a certain Eric Cantona, who started the campaign with Leeds United and ended it at Old Trafford.

Nick Barmby was runner up in the PFA Young Player of the Year Award. 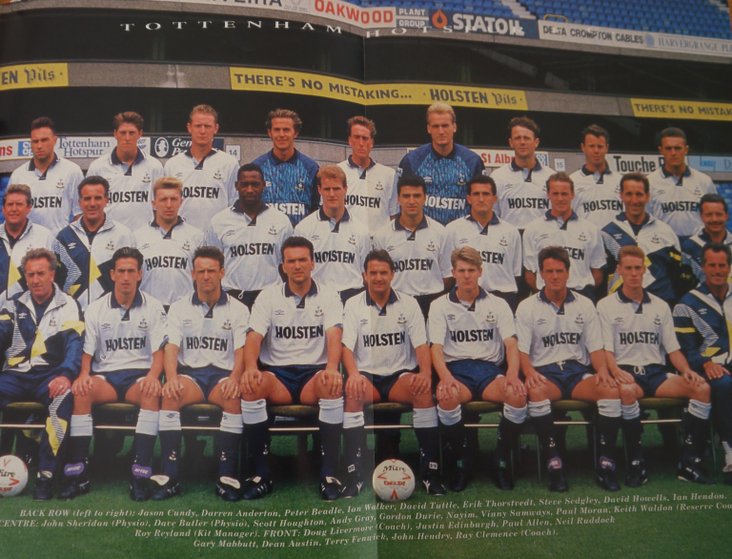  Programmes and moving pictures: Horsham v Swansea City, FA Cup, 2007 The Hornets were in the Second Round of the FA Cup. Roberto Martinez and his Swans came calling.