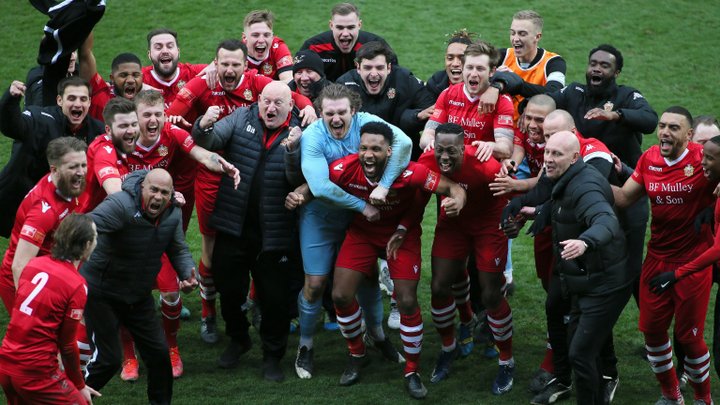 Hornchurch yesterday defied the odds once more, in a season where they've made a habit of it- but this was the biggest upset yet, as they defeated FA Trophy favourites Notts County on their own patch to reach Wembley for the first time.

This has been a season to forget for most of us, and the Urchins have almost single-handedly set out to make it memorable, carrying the flag of the Pitching In Isthmian League past Bowers and Pitsea, Wingate and Finchley, Tonbridge Angels, Dulwich Hamlet, Kings Lynn Town, Maidstone United, Darlington and now County. That's two sides from Step Three, four from Step Two, and two from the National League.

County started the day forty seven places above the Urchins in the pyramid, with a fully professional squad. They should have been better. They should have been fitter- they'd played sixteen matches this calendar year, whereas their opponents had played only three. They were playing on their own Meadow Lane, with no prospect of a replay. Yet our Urchins matched them blow for blow. Falling behind three times, first Lewwis Spence, and then Liam Nash- twice- drew them level, the last goal coming in added time. Off to penalties we went, and it was the home side who felt the pressure- Joe Wright saving one of the home penalties whilst the visitors scored each of theirs.

We're not going to write a match report. Watching a match on a live stream doesn't give you a real feel for the game, so we'll leave that to the likes of the Non League Paper, who have a two page spread and interviewed Urchins boss Mark Stimson- whose side "dared to dream- and the dream came off."

We'll be able to write a full report of the next match, which will be against Hereford under the arch at Wembley on Non League Finals Day, May 22nd- and hopefully some of the Urchins faithful- who have had to watch almost all of their record breaking run from the sofa- will be there to cheer them on.

Congratulations to Hornchurch. Congratulations to the players, the management team, the officials, the legion of volunteers who we meet on a matchday, and to the supporters who will be in dreamland this morning.

The whole of the Pitching In Isthmian League is very, very proud of you.

We are all Urchins!  Today we stand with Hornchurch, who stand one step from a Wembley Final