Relief for Wands, misery for Tanners, Rocks and Moatsiders 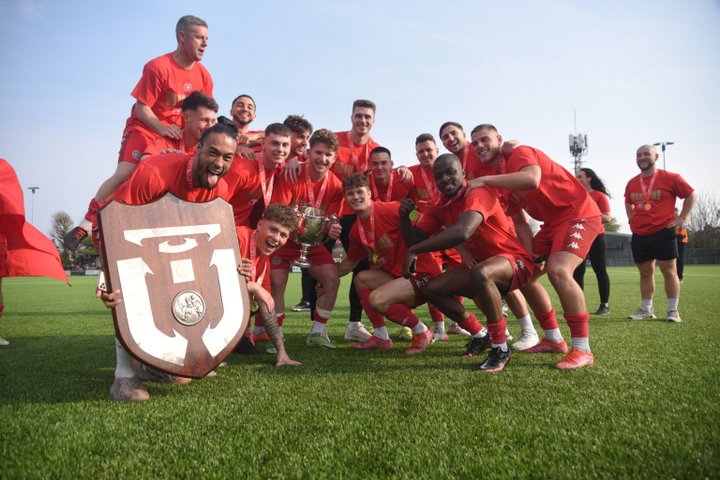 We now have the play offs to look forward to, but for Leatherhead, East Thurrock and Merstham the season ends on a sad note- whilst Worthing get to lift their trophy

At the top end of the table we already knew who the four sides chasing promotion via the play offs would be, we just didn’t know in which order they will finish. Well now we know!

Bishop’s Stortford hosted Cray Wanderers in a match which was critical at both ends of the table, but more critical to the visiting Wands, and they fell behind on twenty one minutes, courtesy of Jonathan Giles and his eleventh goal of the season, this one from twenty five yards. The all-important equaliser arrived from Jamie Yila just after the half hour, but the hosts were ahead once more just before the break, Darren Foxley making it two-one. Five minutes after the restart Giles made it three-one with another long distance shot, and left Wands looking elsewhere for salvation- but they stay up on goal difference, finishing the campaign in nineteenth.

The Blues will welcome Cheshunt on Tuesday night.

Hornchurch still had the chance of overhauling the Blues for second place as they hosted Wingate & Finchley, and they took the lead on twenty one minutes through Ollie Muldoon- but held it for only six minutes before Emmanuel Yeboah equalised for the visitors with a deflected effort. After the restart the Blues went ahead through Jake Eales, and although they were soon down to ten men they held on for the victory which dropped the Urchins to fourth.

Enfield Town welcomed Bognor Regis Town hoping to catch Hornchurch and take home advantage in the play offs, and looked set to do so when Adam Cunnington put them ahead with his head six minutes after the break. They held on for three points, and will welcome the Urchins to Donkey Lane in midweek.

Cheshunt were on the road to Corinthian-Casuals. The only result that didn’t matter a jot in the promotion race was that of the Ambers, who we knew would finish fifth regardless, and they were behind early on, Ollie Sitch scoring after just three minutes, but level by the break, Sam Alderson with the equaliser. That was that, Casuals ending the campaign in fourteenth, Cheshunt off to Stortford.

Our intrigue was at the bottom, where there were both knowns and unknowns. We knew that Merstham and Leatherhead, who welcomed Carshalton Athletic and Potters Bar Town respectively, absolutely had to win to have any chance of staying up- and the Tanners went ahead after twelve minutes, Max Worsfold with the goal. Cameron Black doubled their advantage on sixty six minutes, and that was the score at full time- but it didn’t keep them up, sadly for all at Fetcham Grove, as Kings Langley, third bottom in the Pitching In Southern Premier South, won two-nil to end with a marginally better points per game record.

The Moatsiders fell behind against the Robins midway through the first half, Paris Hamilton-Downes doing the damage, and fell to the bottom of the live table accordingly. Tahjae Anderson gave them hope with an equaliser eleven minutes after the break, but the Robins broke their hearts when Danny Bassett scored three minutes from the end. The hosts are relegated, the Robins end the season in eleventh.

East Thurrock United, who started the match third bottom of our Premier Division, were off to a flyer, Chid Onokwai opening the scoring against Horsham in the first minute, but they couldn’t hold the lead until the break, Eddie Dsane equalising for the Hornets. Tom Kavanagh converted his customary spot kick on the hour to put the visitors ahead, before Ben Wyss equalised with twenty four minutes left. There was another twist, a late winner from Dsane in injury time making sure of the Rocks relegation.

Elsewhere, Haringey Borough welcomed Folkestone Invicta, and although the visitors went two up by the midway point of the first half- Adam Yusuff and David Smith with the goals- Borough were level within ten minutes, Sami Bessadi and Jorge Djassi-Sambu hitting back. Invicta then went two goals ahead once more, Kieron McCann and Smith with numbers three and four, but again the hosts hit back, Scott Mitchell and Georgios Aresti scoring on eighty eight and ninety minutes to end an eight goal thriller level.

Lewes host Bowers & Pitsea- managed by Rob Small for the very last time- and the two traded early goals, Deshane Dalling on four minutes for the hosts, Michael Ademiluyi hitting back almost immediately. Lewis Manor put the visitors ahead twelve minutes after the break, but Joe Taylor earned his side a point two minutes later.

Margate welcomed Kingstonian arrive at Hartsdown Park, and the K’s took the lead after twenty four minutes, Walter Figueira with the goal. After the break the Blues hit back, equalising through Nkori Bola and then taking the lead through Louis Collins, holding on for three points to end the season in eighth.

Worthing welcomed Brightlingsea Regent and the title trophy, and our champions took an hour to take the lead, Jasper Pattenden with the goal. It turned out to be the only goal. Go well in National League South, Mackerel Men- and please, whilst we’ll miss you, don’t come back! Image from Marcus Hoare- we'll miss you too, Marcus!

A bottom end bonanza  We know our play off candidates, if not their final position, but the jeopardy in the Pitching In Isthmian South East is all at the wrong end.