Robins go third, Millers hit six, and the Nuts and Bolts guarantee their play-off place, whilst doing the same for Hastings United… 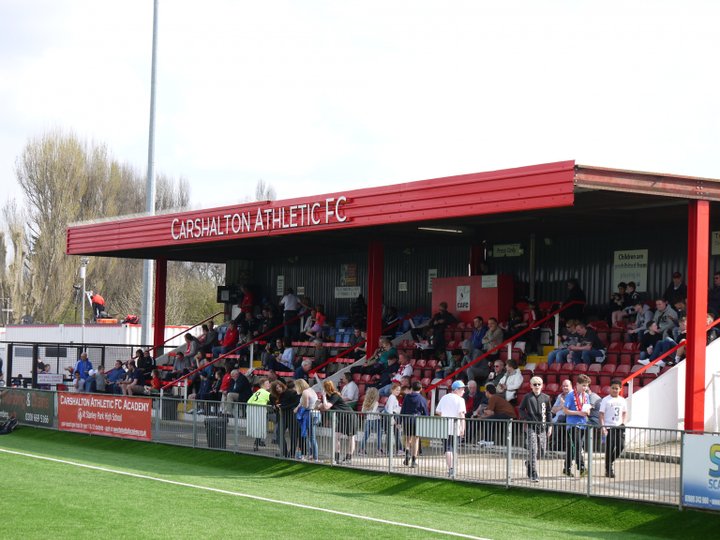 …and more than 1300 turned out at Worthing. It’s our round up of Good Friday’s action.

We had a limited programme of fixtures yesterday, but in the Premier Division they involved three of the top five. Carshalton Athletic were the big winners, and the Robins have now won eight of their last nine matches and are the form side as we head towards the Playoffs.

Athletic welcomed Burgess Hill Town to Colston Avenue. On the previous occasion that the Hillians made that trip they ended it by celebrating promotion to the Premier Division, a status they’ve held onto by the skin of their teeth ever since. This season has been another struggle, and yesterday didn’t help them much, as goals from Ricky Korboa- one in each half- saw the Robins run out 2-0 victors. Hill will now be hoping that Whitehawk and Wingate & Finchley slip up today, as a win for these sides would see them four points from safety with only two matches remaining. Six hundred and ninety one turned out to watch.

Tonbridge Angels were third at the start of play, and they travelled to fifth placed Worthing. In front of a magnificent crowd of one thousand, three hundred and twenty two, Joe Turner put Angels ahead with less that half an hour remaining, but Steve McKimm’s side couldn’t hold out and nine minutes from time David Ajoboye found an equaliser. A win for Leatherhead or Bishop’s Stortford today- or a very large win indeed for Merstham- could see the Mackerel Men drop out of the top five.

In the North Division, Aveley look a very good bet to have earned themselves a home tie in the playoffs. AFC Sudbury arrived at Parkside yesterday, and perhaps wished they’d stayed at home, as they left after receiving a six-nil hiding which saw Alex Akrofi score a hat trick and assist in the other three goals, which came from Sam Bantick, Bobby Vaughan and via a Sudbury defender.

The Millers are still in third place, however, as second place Maldon & Tiptree were also picking up a fine victory with a three-one win over Great Wakering Rovers. Eddie-Louis Dsane, Liam Hope and Tariq Issa got the Jammers goals, whilst Josh Wiggins got the consolation for Rovers right at the death.

Maldon are seven points clear of Coggeshall Town and Heybridge Swifts, whilst Aveley have a six point lead, with both of their rivals having three matches remaining.

Over in the South Central Division Ware really needed to pick up a victory at Bedfont Sports to have any chance of overhauling Westfield for the final playoff spot. Sadly for them, a young Sports team had other ideas and ran out three-two victors, a result which leaves Ware four points off fifth place with only two matches to go, and gives Westfield- and seventh placed Tooting & Mitcham United- a game in hand. Dave Cowley gave Ware an early lead only for Sean McCormack to equalise, and then Jack Mills put the home side ahead. We were level by the break, however, as Brandon Adams got Ware’s second, but a James Simmons penalty twelve minutes from time saw the points remain at home.

We had one match in the South East Division, but it was a big one, as Ashford United looked to confirm their playoff spot whilst sixth place VCD Athletic looked to crash the party. It was the Nuts and Bolts who came up trumps despite falling behind in only the second minute when Junior Baker scored for Vickers. The lead lasted only six minutes, Lee Prescott with the equaliser, and by half time Ashford were ahead, a goal from Jay May giving them the advantage. Danny Parish sealed the victory a quarter of a hour from the end.

That victory not only assures United of their playoff spot, it does the same for Hastings United, who now cannot be overhauled by VCD. It also gives a timely boost to Haywards Heath Town, who remain three points clear of Athletic in the final playoff spot and can as good as seal their place with victory at Ramsgate today as they have a far larger number in the goal difference column. Vickers will be looking for the Rams to do them an enormous favour if their dream is to remain alive.

 Bostik Matchday: Wingate get the blues Wingate and Finchley are desperate to escape the bottom three. Chairman Aron has lost his lucky underpants. Margate took the points.